These are the last photos I've processed and edited for Souvigny. On the afternoon when I took them, we also went to Agonges, a village a few miles to the north that I've posted about already. The previous day, we had been to Lapalisse, Jaligny-sur-Besbre, and the Puy Saint-Ambroise, all of which I've already posted about as well. It was three weeks ago when we finished the trip to the Bourbonnais/Allier area. 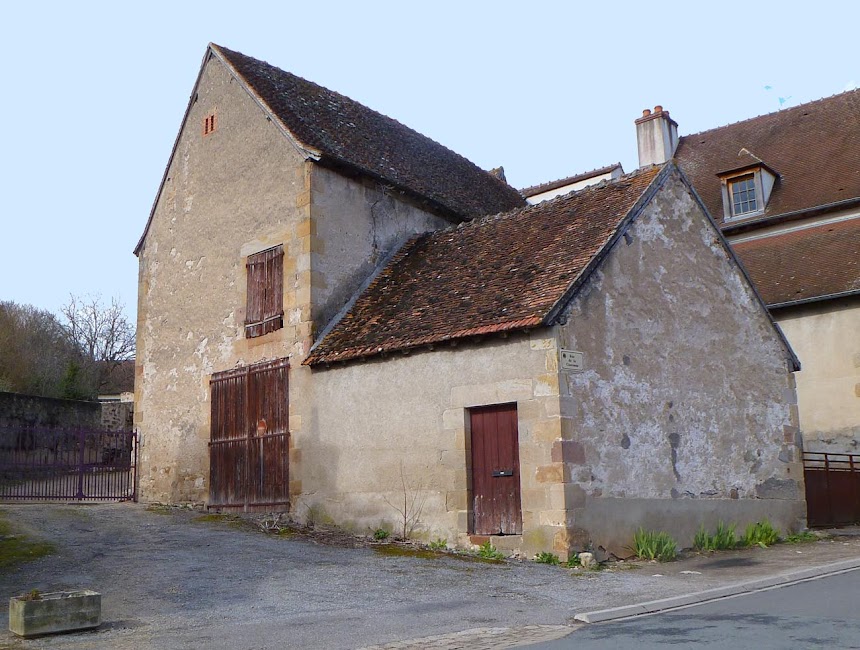 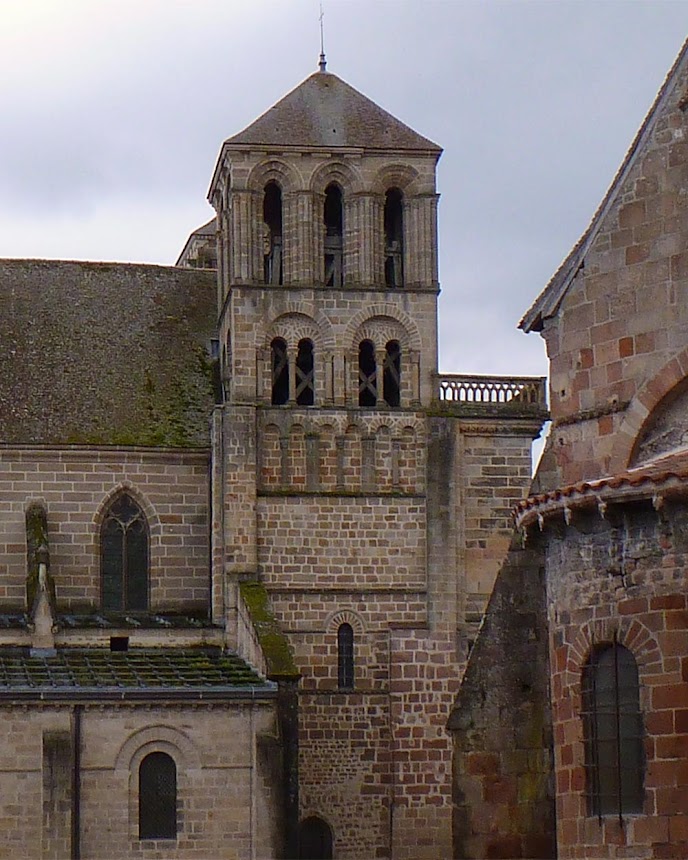 Some of these are versions of photos I published yesterday, or on the same subject. You might remember the building above from a photo in yesterday's post, for example. It looks more like a barn than a house, but then I see what appears to be a mail slot in the small door.

And then on the left is a view of one of the St-Pierre-et-St-Paul church's thousand-year-old bell towers. 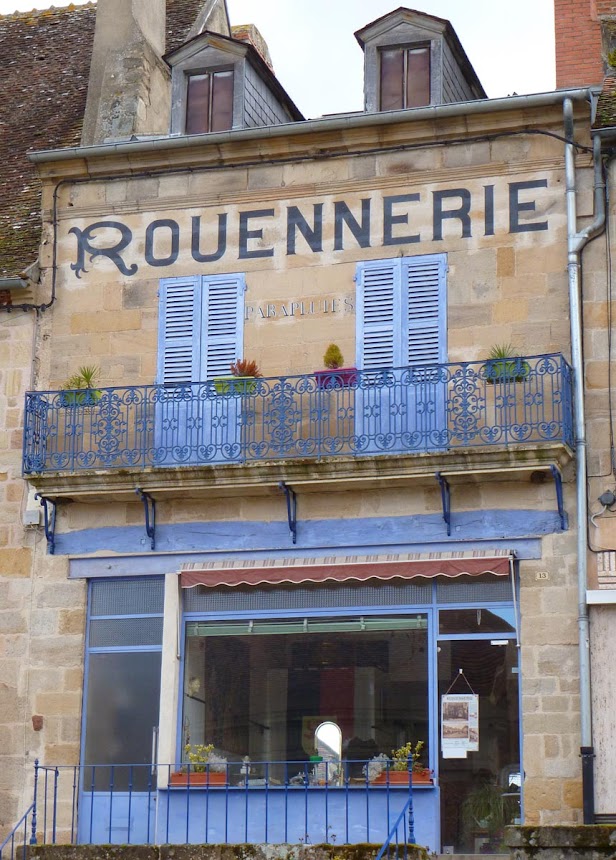 Let me return to the mysterious term « rouennerie ». It's obviously based on the name of the town of Rouen, which is the capital of France's Normandie region. The city is famous for many things — its cathedral, which Monet painted dozens of times in different light conditions; the burning at the stake of Joan of Arc there in the 1400s; the rain that falls there so much of the time that Rouen has been called "the chamber pot of Normandy." Another of Rouen's claims to fame is the faïence (earthenware) plates and dishes that used to be manufactured there. At first I thought the word Rouennerie on the sign might refer to that, but it doesn't.
« Rouennerie » [roo-ah-'nree] turns out to be a kind of cloth that was woven in Rouen. It was either made of cotton or wool, and it's special characteristic is that the thread it was made from was dyed first and then woven. The predominant colors were red, pink, and violet. One dictionary gives this definition: Toile en laine ou en coton, d'abord fabriquée à Rouen, où dominent des couleurs comme le rose, le violet et le rouge et dont les dessins ou les reliefs résultent de la disposition des fils teints avant le tissage. 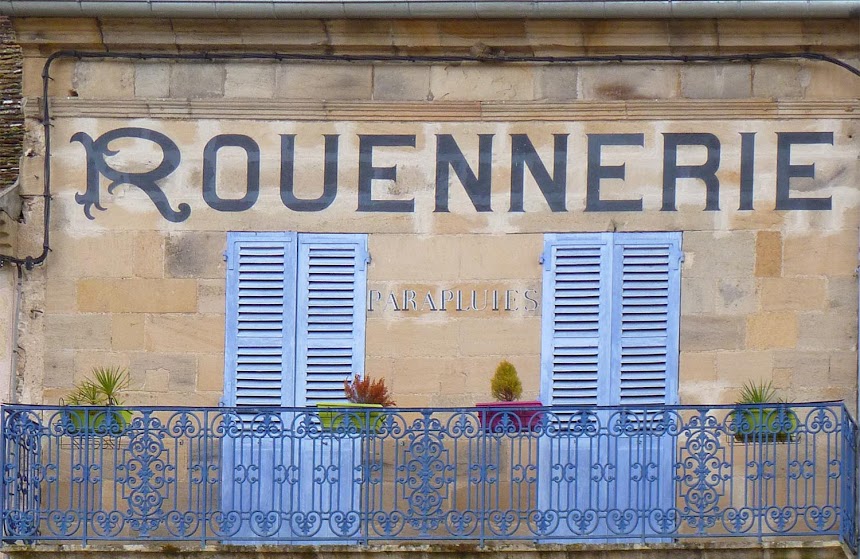 It seems particularly apt that the name of one of the products sold in the shop is « parapluies » — umbrellas — given the city's "chamber pot of Normandy" nickname. See the word printed on the façade between the blue shutters. Rouennerie fabric is no longer made in Rouen, apparently. Here are some Google images. 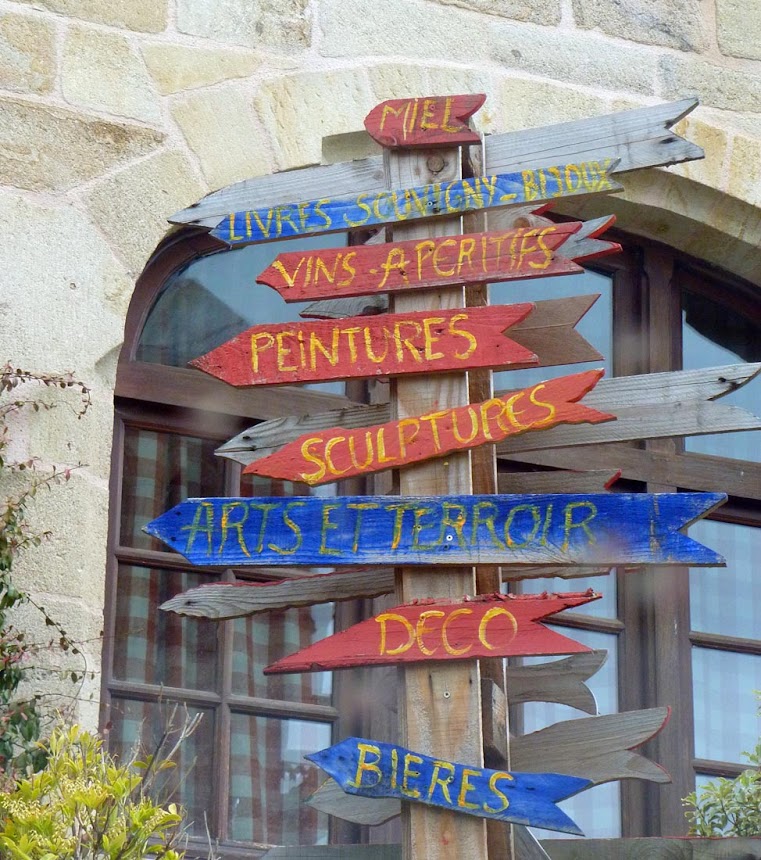 Above is a colorful sign that stands in front of the Arts et Terroir shop on the main square in Souvigny. 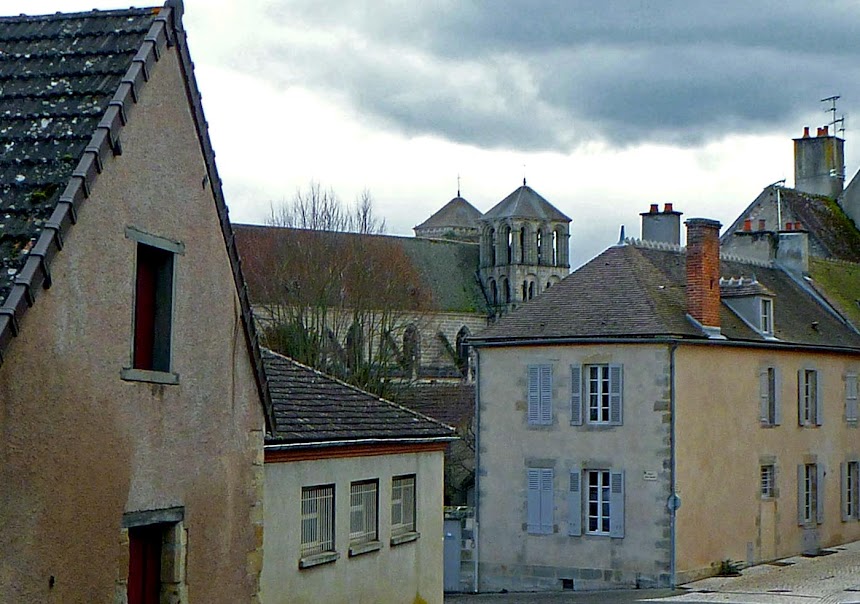 Finally, here's one more shot of the church towers from some of the little streets around the religious center of Souvigny, and more of the very plain, almost austere archictecture that you see in the town.
Posted by Ken Broadhurst at 06:30