The turkey I cooked yesterday weighed just 5½ lbs. — 2.5 kilos. I'm not sure you can even find such a small dinde in the U.S., and I don't know if the size is related to a breed of turkey or the age of the bird. You could cook a large American chicken this way. 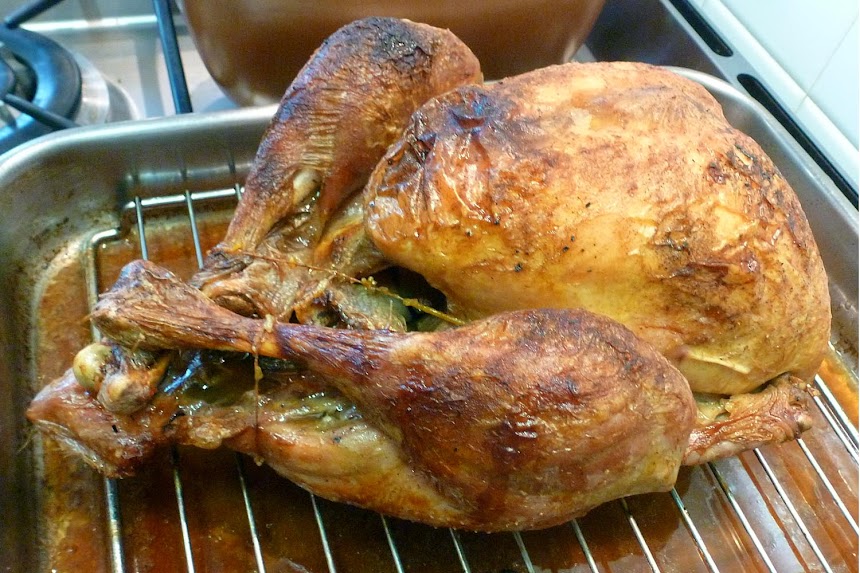 I thought about cooking this small bird in the slow-cooker overnight, but I decided it was too tight a squeeze. The turkey's legs and thighs might stick to the sides of the slow-cooker insert and make it difficult to get the cooked turkey out in a presentable form. Then I found a couple of web sites where people described methods of slow-cooking a turkey in the oven. 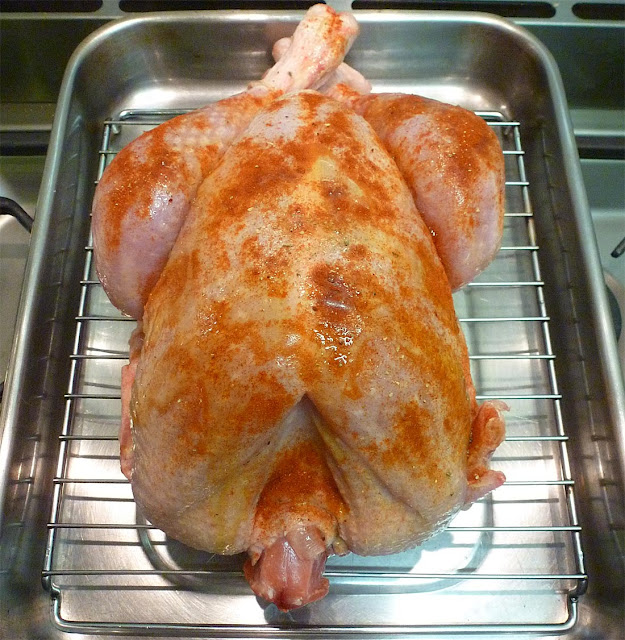 The first step is to put the turkey in the oven at high temperature — 220ºC, which is 425ºF — to let the skin start to brown. You have to watch it carefully, because you don't want to burn it. You can gradually turn the heat down over the course of about 45 minutes to prevent over-browning. When the skin is looking nicely browned, turn the heat down to about 325ºF (160ºC) and let the turkey cook at that temperature for about another hour. I always put some liquid (wine, water, or both) in the pan under the turkey to keep the drippings from burning.

I had put shallots, garlic, bay leaves, salt, black peppercorns, and allspice berries inside the bird, so the drippings were well flavored and I ended up with a tasty broth. I had also rubbed the skin with olive oil and sprinkled on some smoked paprika and hot pepper powder. 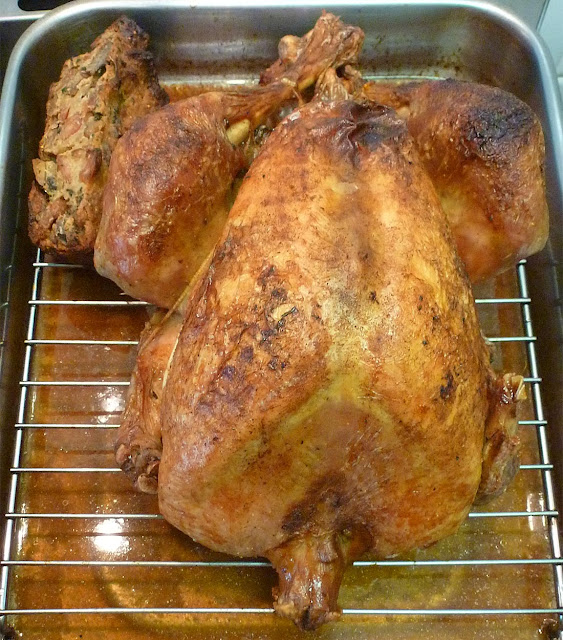 After about two hours of cooking as described, and basting the bird to keep the skin from getting too dry, you can turn the heat down again. At 200ºF (about 95ºC), leave the turkey in the oven for about one hour per kilo of weight (30 minutes a pound). The bird I cooked stayed in the oven for another 2½ hours, making the cooking time 4 to 4½ hours in all. I basted it every 30 minutes at least, using (what else?) a turkey baster, and I added water as needed to keep the pan from drying out.

The result, as you can see, is a bird with nice golden-brown skin. And the meat — even the breast — is not dry but tender and almost luscious. Actually, it's pretty much what they call confit in French, which is the opposite of dry or stringy. The leg, thigh, and wing meat is starting to fall off the bones (see first photo above). That's what slow-cooking is all about.

And that's a piece of leftover Christmas stuffing next to the turkey's drumstick...
Posted by Ken Broadhurst at 07:00