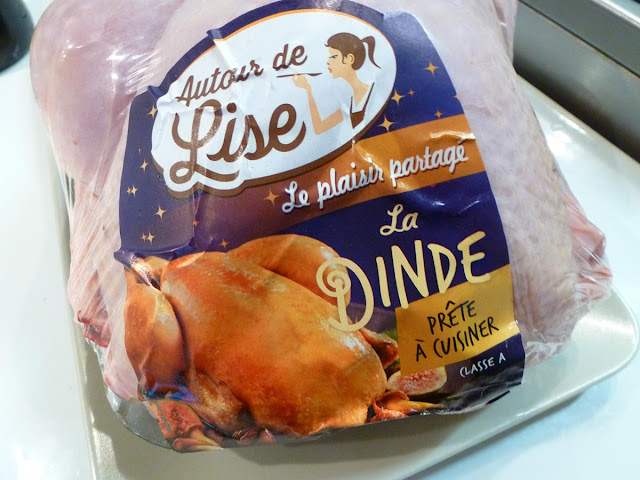 Turkey is American, of course, but it is also standard French holiday fare. I put the word in English in my title today because, despite the packaging, I can't be sure whether the turkey that I bought and cooked was a hen turkey (une dinde), a tom turkey (un dindon), or an immature turkey (un dindonneau). The words are not used consistently in French cooking terminology. For example, I just read a recipe for Dindonneau en daube à la bourgeoise in the Larousse Gastronomique food encyclopedia, and the first line says the main ingredient is une dinde. 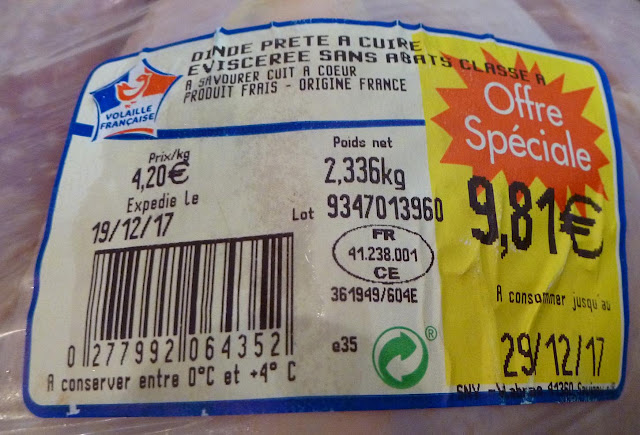 So at Christmastime this year, and over the week following, there were expensive turkeys and less expensive turkeys available in the supermarkets. For our Christmas dinner, we bought a farm-raised turkey from our preferred poultry vendor at the open-air market in Saint-Aignan, and it cost us about 11 euros per kilo. That's 40USD for a 3.5 kg bird. It was very good, just roasted and served with stuffing. We had the leftovers prepared various ways, including some of the breast meat that we chopped up and put in chile con carne with pinto beans. 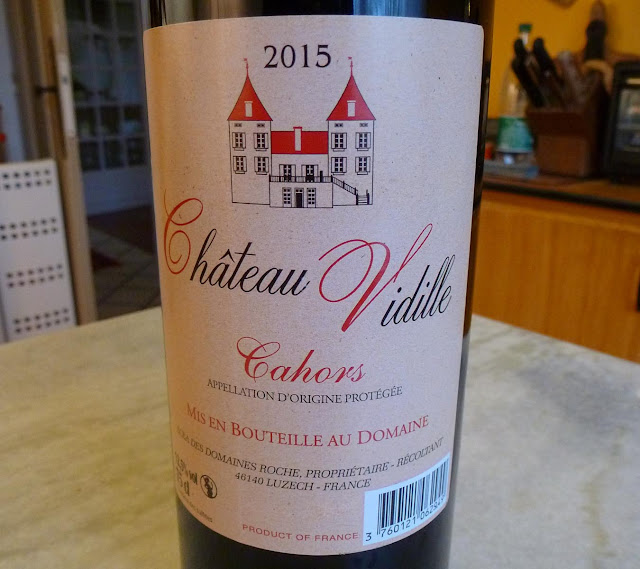 I kept looking at the less expensive turkeys in the supermarkets — what in French are often called produits industriels. Agri-business, you know. Unless you are buying from a farm, that's what you get in the U.S. anyway, so why not? The "industrial" turkeys might not be as meaty and flavorful as farm-raised birds, but all that means is that you need to be more creative in seasoning and cooking them. I ended up buying two such turkeys during the holiday season, one at each of our local supermarkets, and the price at both was 4.20 euros per kilo. That comes out to about two dollars U.S. a pound. I also bought a capon for the same price. We may be growing feathers this spring, eating so much poultry. 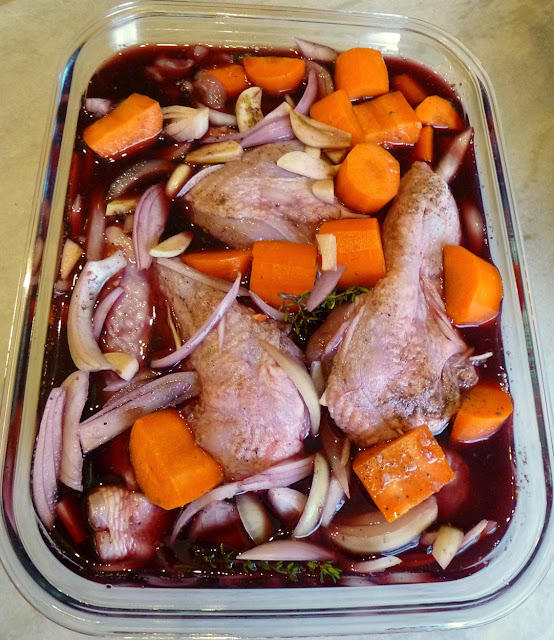 For one of my low-priced turkeys — it weighed only five pounds — I decided that a creative way to cook it would be to treat it like a tough old rooster and make the red-wine dish called Coq au vin. I cut it up, marinated it in the refrigerator for 30 or so hours (*30* is not a typo) in red wine (the Cahors "black wine" pictured above, 2.50 euros a bottle) with carrots, onions, garlic, salt, black pepper, herbs, and allspice. I followed but adapted a French recipe that I found on line. I'll post my translation of it — it's pretty simple and straightforward. To keep to what has been my theme for a few weeks now, I could have cooked the turkey in Chinon red wine. However, the Cahors seemed like a better idea. More to follow...