Saint-Aignan in the summer of 2003

June 13, 2003. I found a batch of photos I took on that day, which was our second day in the house where we've lived ever since. Then I thought to look through this blog and I found that I've posted about that day, with photos, several times in the past. We had arrived in France that June, and we had the bought the house, but we were waiting for our container load of furniture and other belongings to arrive. We didn't have even an estimated arrival date from the moving company. Here's a post from 2010 about that time. 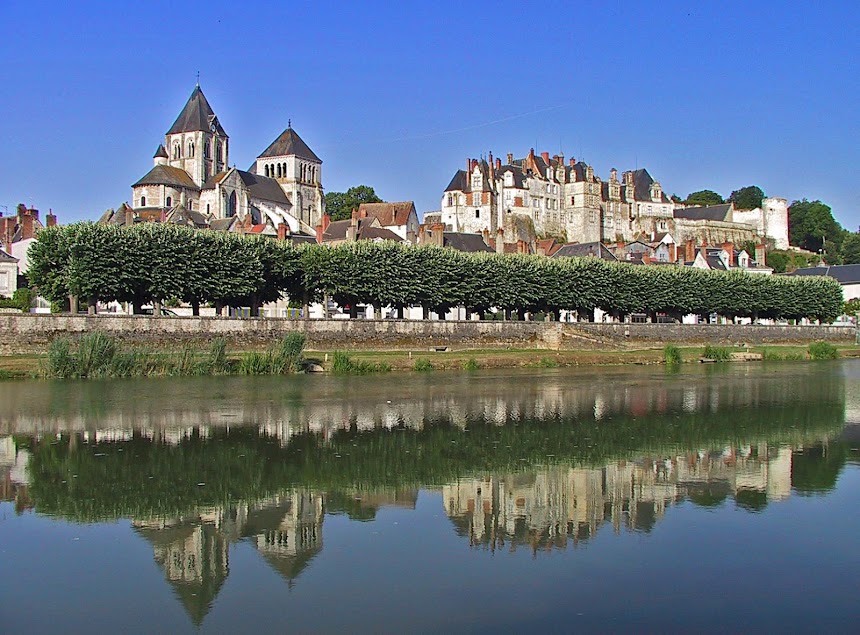 Meanwhile, I also found a batch of photos I took a little later in 2003 down in Saint-Aignan. I want to post a few of them, because I think I have never put them on the blog before. We had never  heard of Saint-Aignan, we thought, when we came here in December 2002 to see if we could find a house to buy — or at least to see houses and see if there was anything we could afford or think we'd be happy living in. A real estate agent in Montrichard recommended Saint-Aignan to us. Years later, we realized we had driven through Saint-Aignan on a road trip we took all around France in 1989. 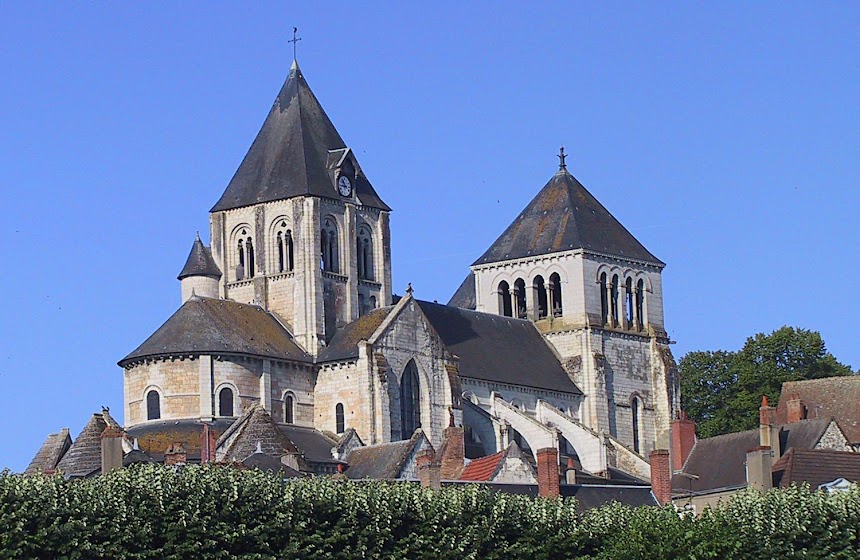 We drove over here from Amboise on a Tuesday morning in December 2003, and this is what we saw. Of course, that was in December, so the town didn't look exactly like what you see in these photos from six months later. In winter, Saint-Aignan can be damp, dark, and kind of gloomy, but we had enough experience of France to know it was the kind of town where we'd be happy to live to live someday. 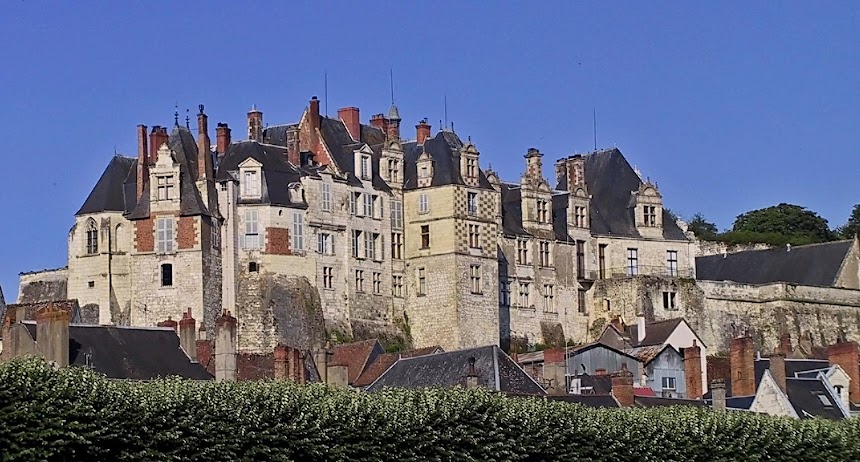 We had no firm plan about leaving the U.S. at that point. We were just exploring. It was almost a lark, and certainly an adventure. We were lucky to find a cooperative and helpful real estate man, who seemed to understand what kind of house we were interested in. On that December day, we first saw the house we live in now. On paper, we would have rejected it as being too small.

Out of 15 or so houses around the area that we inspected, the one we've ended up living in ever since was the only one that really seemed to have potential, as well as being located in a desirable area: at the end of a dead end road, on the edge of a vineyard, with a big flat yard (not on a hillside), a hedge that gave good privacy, and only 2 or 3 miles from a good-sized town with shops, supermarkets, and services. 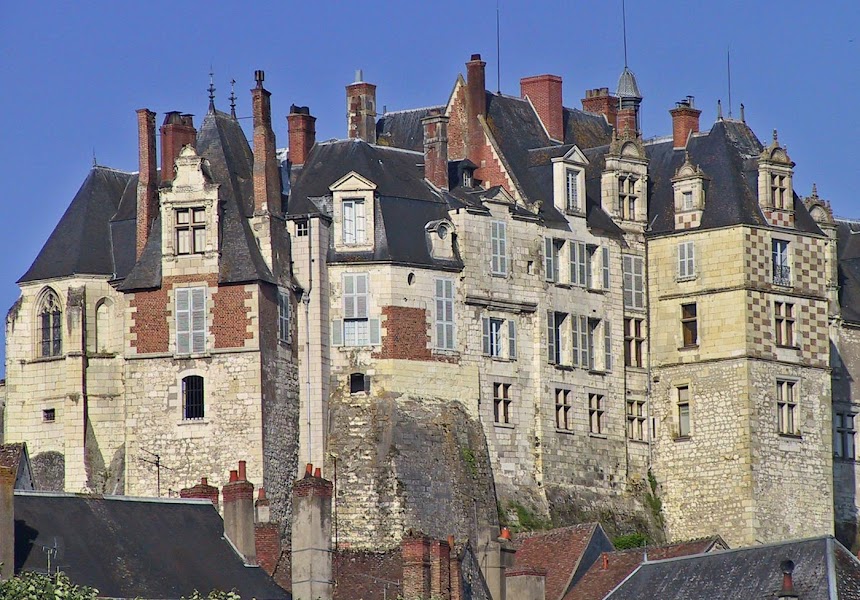 That summer of 2003 was quite an experience for two guys who had spent many years in San Francisco, where summer weather is windy, cold, and foggy. (Mark Twain said something like the coldest winter he had ever lived through was a month of August in San Francisco.) We had arrived in France in the year of the Canicule — "dog days", the great heat wave during which thousands of French people died exposure and dehydration — and we endured weeks and weeks of extreme heat. That summer, we were camping in our basically empty house, which of course had no air-conditioning (and still doesn't). 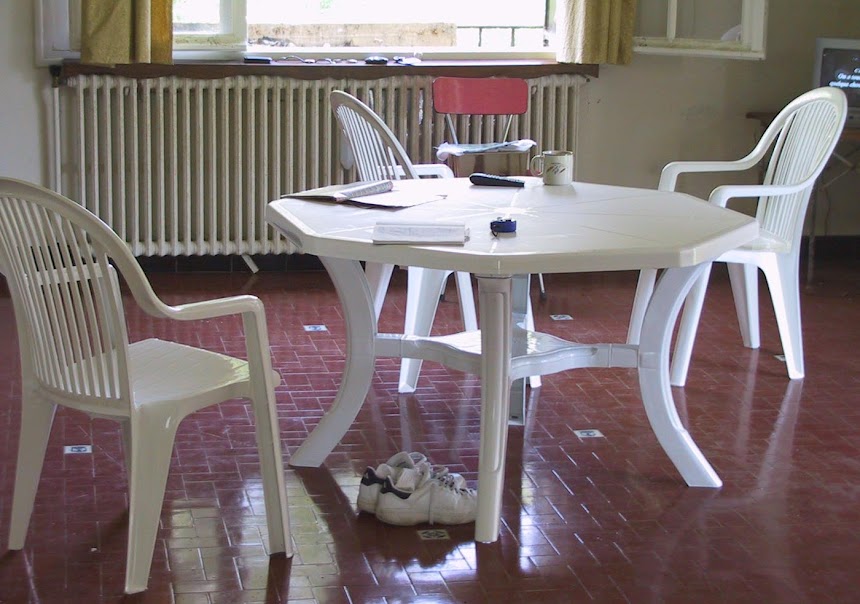 We went out and bought some vinyl outdoor furniture to use as a dining room set while we were waiting for our container to arrive from California by boat. We figured we'd use the outdoor furniture, well... outdoors, after we had real furniture in the house. 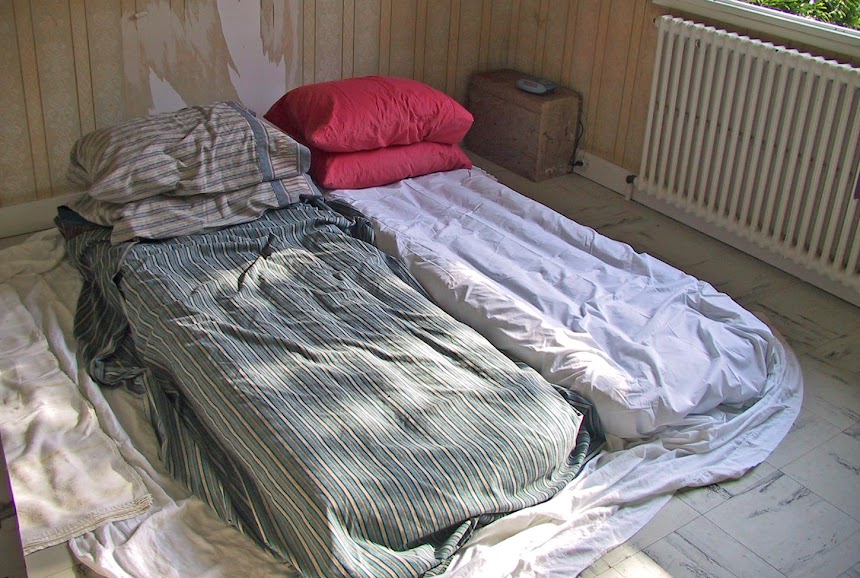 And we slept for weeks on the floor, on air mattresses that we bought at the local supermarket, covered in sheets that we borrowed from friends in Normandy. It was so hot that that summer that we feared we might have made a big mistake by buying a house in the Loire Valley. Here are some photos of the San Francisco house we had been living in but had sold.
Posted by Ken Broadhurst at 07:00