Getting used to it

It's the first morning of a new era here. We're making our best effort to get used to it.


Callie's food bowl has been taken over by Tasha now. That's sensible and the right thing to do. Tasha has also taken over Callie's beloved "tricky treat ball," which Callie showed her how to play with. It's a hard plastic ball that has a hole in it. You put some kibble or dog treats in it, and the dog learns to roll it around, making the occasional piece of kibble or a treat fall out. The dog gobbles that up, and rolls it around some more. Callie would play with it for the better part of an hour every morning. Tasha is actually better at it than Callie was. She has the ball emptied of treats pretty fast. Callie hardly ever emptied it out completely. 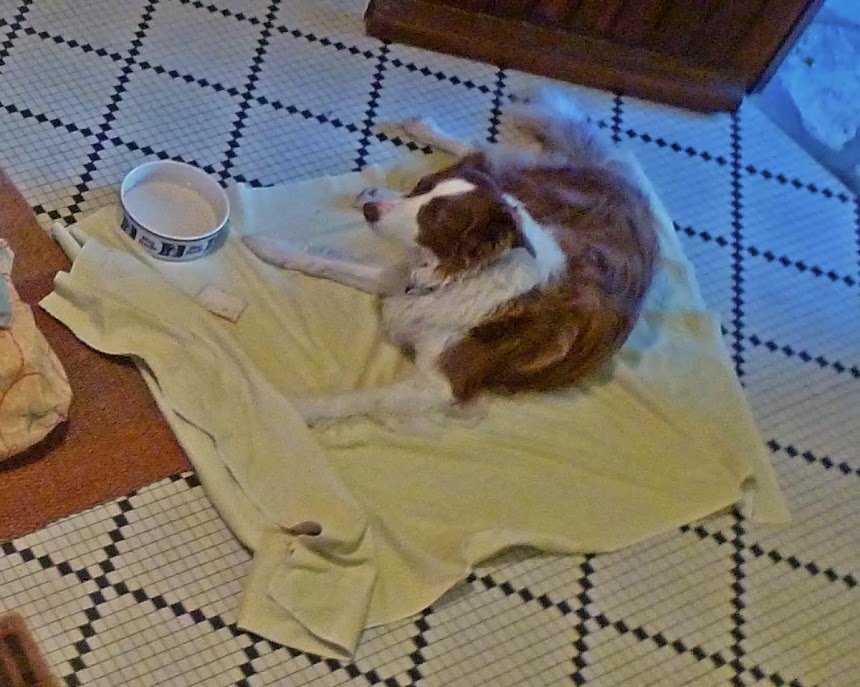 Callie yesterday morning, on her towel with her water bowl. She could no longer stand or walk.
I keep picturing Callie on our last walk and wondering why I didn't see any signs that she was suffering. I think she was. She had become sort of driven by our walks. She took them with purpose rather than as a fun activity. On that last walk, she walked behind me most of the way, keeping up, rather than running out in front of me.
A strange thing happened that morning that had never happened before. It almost feels like it was some kind of premonition, even though that sounds silly. After Callie and I had walked around the south side of the vineyard and through the little wooded area that Callie seemed to love to walk through, we continued along our regular path through rows of vines to the north side and then turned back toward home.
At a point on the edge of a kind of ravine — it's a dry creek except when we have heavy rains — and next to a line of trees a dead fawn lay on the path. I had never seen a dead deer in or around the vineyard before, but we had recently seen deer at this place several times. One morning there, a young deer suddenly jumped up out of a patch of tall grasses where it had been hiding, startling me and exciting Callie. Saturday morning, Callie actually saw the fawn carcass — smelled it, probably — before I did. The poor thing looked to be in perfect condition, not mauled. It was very small, because the local deer, called "roe" deer, are much smaller than our North American deer. Callie sniffed the dead fawn carefully, almost tentatively, and I called her to leave it alone and follow me. She obeyed.
When you know how much Callie loved to see and chase a deer, you know how ironic it is that on her last walk in the vineyard she saw one that couldn't run away. I wonder whether, if we had seen a live deer that morning, Callie would even have been able to chase it, given her aching back. As I said, she was moving at a slow pace, and that probably meant she was already feeling a lot of pain. There's no way to know, just as we will never know if there was a specific event that caused her disability last Saturday afternoon, or if the condition had just gradually progressed to the point where Callie could no longer ignore it or function.

Callie in September 2007, six months old. Look at that long tail.
The vet yesterday said that the nerve failure had progressed more rapidly than usual. She did tests that showed Callie had no feeling at all left in her back paws, and explained to us what she was doing. She said that when she gave Callie's paw pads a hard pinch, the dog's natural reaction would have been to turn her head and look to see what was causing the pain in her paw. Callie didn't react at all. Also, Callie peed on herself when we picked her up to put her in the car for the ride to the veterinary clinic, she peed again when we took her out of the car to carry her into the clinic, and she peed on the examining table as the vet started to touch her. Since she had no bladder control left, squeezing her as I picked her up made her pee. And her natural fear of the vet probably made her pee on the table.
No bladder or bowel control, the inability to stand up or walk... those were the symptoms we noticed. There was one that we thought about only after Callie was gone. She had stopped wagging her tail. She would always flap and slap her tail on the floor when she was lying down and we talked pretty to her. By Sunday, she no longer had control over the happy tail-wagging bahavior that we all love so much in our dogs.
Posted by Ken Broadhurst at 07:15