Callie the border collie — no miracle

I went to spend the afternoon at the château de Chambord yesterday with "Seine Judeet". Judy is a woman Walt and I knew back in Paris in 1981-82 but hadn't seen again since then. She's been a frequent commenter on this blog over the years. She's been staying in Saint-Aignan for a couple of days. When I got home at about 6 p.m., Walt told me we had an emergency on our hands. It was Callie, who had suffered some kind of malaise.


At that hour on a Saturday, the clinique vétérinaire was of course all closed up. I called the clinic's phone number anyway, and heard a recording that gave me an emergency number for such situations. I called that number and talked to a vet who was on call. He asked us to bring Callie to his office, which is just 5 miles from our house. I carried Callie out to the car, laid her on the back seat, and off we went.


The main — and, actually, only — symptom of Callie's malaise was her inability to stand up on all four legs. Her back legs were, and are still, paralyzed, or so weak that they won't support her weight. She seems to have even less control of them this morning than last night. A dog that can't stand up, or walk, is a dog that can't live, I think. The vet said he didn't think Callie had had a stroke.


He said he thought it was more likely a spinal cord injury or defect. He gave Callie a massive dose of cortisone as a shot, and said she should probably start feeling better and be able to move around over the following two or three hours. Well, that didn't happen. It's now 12 hours later and Callie still can't get up off the floor. 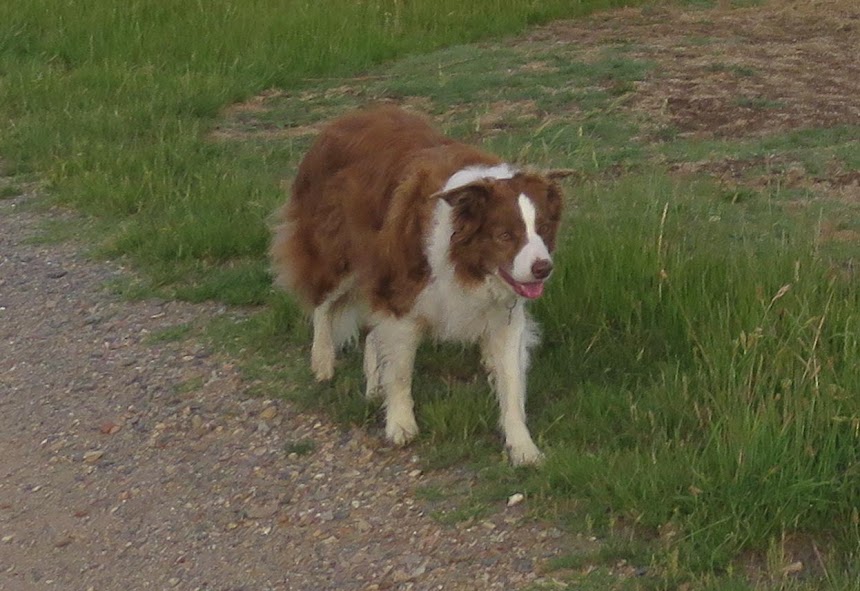 Here's the last photo I took of Callie on one of our walks. It was a week ago this morning.


So it looks bad. She was in the downstairs entryway yesterday afternoon when Walt went to take her out for her walk. She couldn't stand up. Walt said he sat and talked to the dog, and cried, for an hour or so before I got home. I had taken Callie for a perfectly normal walk yesterday morning, and she had eaten her food with gusto after the promenade. Walt said Callie (10 years old) and Tasha (4 months old) had spent the afternoon snoozing downstairs. It was a very hot afternoon. They didn't do any rough playing, Walt said.


So now we have to face the inevitable. At midnight, I hauled out a single-bed mattress, dragged it into the entryway, found some sheets and pillows, and slept down there on the floor with Callie. When I say "slept" that's a slight exaggeration. But I lay there listening for any sign or sound from Callie that the cortisone was having the desired effect. All I heard was a little whimpering once in a while.


So it's Sunday and we can't go see another vet until tomorrow. I'm afraid we'll have no choice but to have our poor, dear Callie put down. Here come those tears again...
Posted by Ken Broadhurst at 06:50