I have a theory about cameras and photographers. The bigger and more complex your photography equipment, the fewer photos you actually take. You end up spending most of your time fiddling with settings and trying to get that perfect shot. It's a little like the writer who wants to produce the Great American Novel but works on one book for years and years. The writer who just churns out the text sometimes ends up writing a masterpiece. 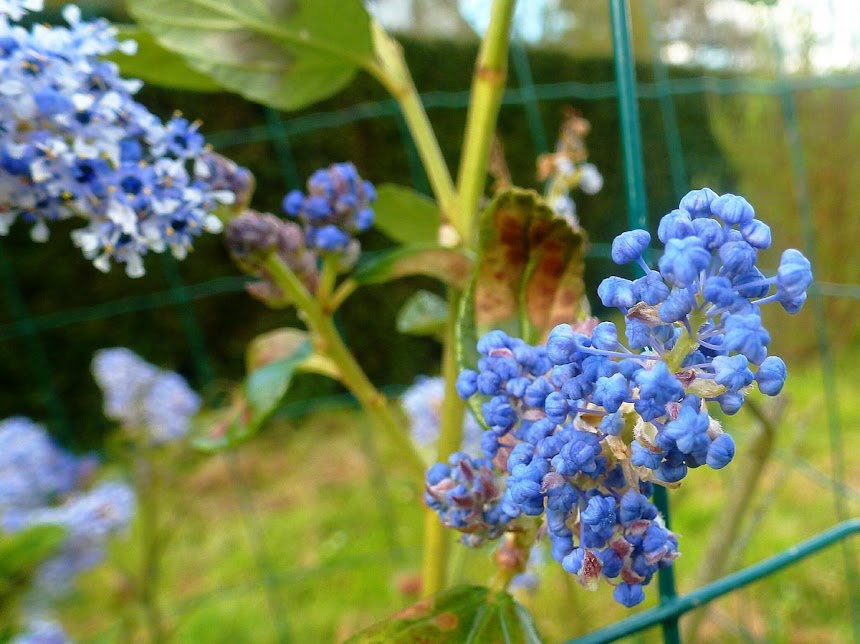 That theory is self-serving, of course. I don't have the imagination or organizational skills to write a novel or become a serious photographer. I write snippets, and I snap hundreds of picture every week. Some of the photos turn out okay, and some are better than okay. Most are not. But that's fine with me. I enjoy taking them, and it gets me and Callie out of the house. But I need a good, easy-to-use camera in order to find enjoyment in the process. I also enjoy processing the images on my computers. Or even tablets, as I processed most of the ones in this post. 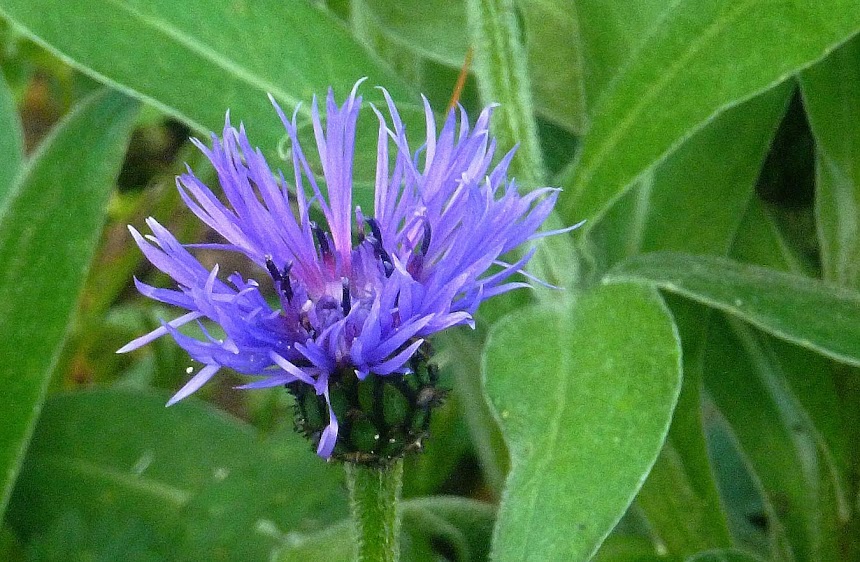 I recently acquired a 10.1" tablet (Android) and I'm really happy with it. The screen is big enough that my not-so-nimble fingers can actually "type" on the on-screen keyboard, because the "keys" are larger on a larger screen. And photos show up larger on it too, so that I can see what I'm doing when I crop, sharpen, or otherwise edit them. I've found a photo editor I like. It's called Fotor. I also use PixLR some. Neither one has all the features of Photoshop Elements, which doesn't have all the features of the full Photoshop application or Lightroom, but the lighter-weight apps work for what I want to do. 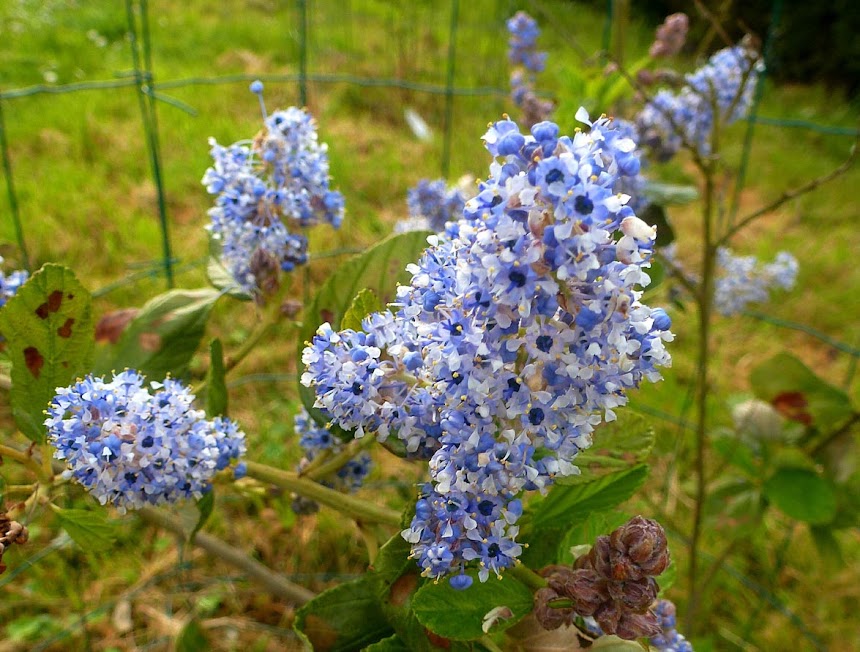 The photos in this post emphasize blues, while the ones yesterday focused on reds. I take a lot of flower pictures over in our across-the-street neighbors' yard, where there are many, many flowering plants. The neighbors are the couple who live most of the year in Blois, a 45-minute drive north of here Their son works in a gardening center up there called Jardiland. The neighbors are both in their 80s now, and they both have health issues that prevent them from coming down here to their "summer place" as often as they used to. We became friends with them immediately when we moved here in 2003. They have had other American friends over the years, even thought they speak no English at all and have never themselves been to America or even flown on an airplane. 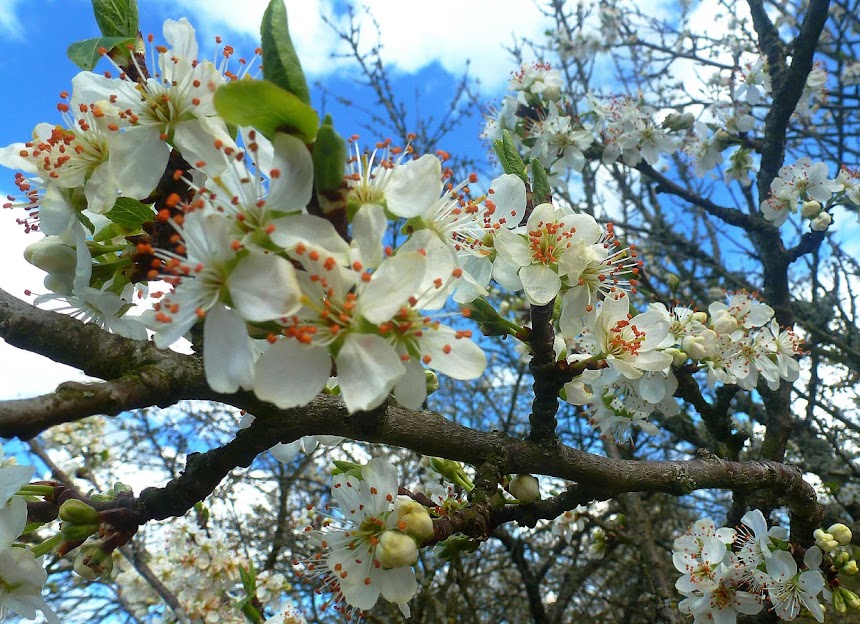 When we first moved here 13 years ago, we ended up having a much more active social life than we had ever had before, either in Washington DC or the San Francisco area. It was mostly because of the neighbors. They would have big parties in the summertime, with as many as 150 people in attendance for special occasions like Bastille Day or their own 50th wedding anniversary. We met so many people it sometimes made our heads spin. That and the wine and good food! Nowadays, things a quieted down again, significantly. 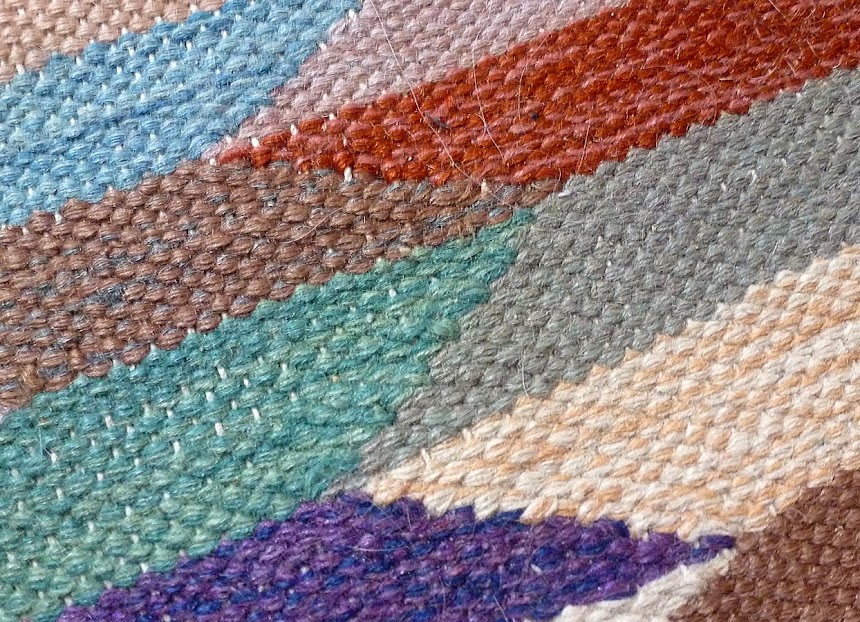 The fact is, we felt welcomed when we arrived here, and we both spoke enough French that we could socialize with all those people easily. Most of them — none, really, besides the stray American or Brit — ever spoke English. We were a part of the local social scene and we learned a lot. But it couldn't last forever — what does? The flowers don't, but this is the season. The rug in the last close-up has lasted, however. We've had it for 20 or 25 years. Who remembers?
Posted by Ken Broadhurst at 07:15