Last week a friend who lives in northern Virginia wrote to me and asked me what I knew about the Southern U.S. specialty called "pimento cheese." She said she had ordered grilled pimento cheese sandwiches in two different restaurants in the Charlotte N.C. area and had found the pimento cheese mixture to be pretty hot and spicy. 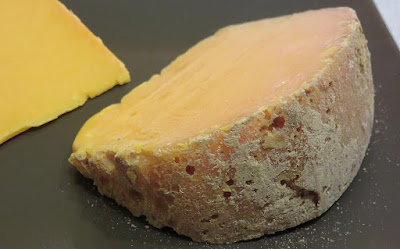 I told her I wasn't surprised to hear that pimento cheese has been spiced up by the addition of cayenne pepper or maybe some roasted chili peppers by younger chefs these days. It's the style now. When I was growing up, pimento cheese was a staple in our house and it wasn't spicy at all, but slightly sweet because of the roasted sweet bell peppers (or pimientos) in it and because the mayonnaise used in the mixture was slightly sweet too. I saw a quote from a well-known North Carolina novelist saying that pimento cheese was "the peanut butter of his household" when he was growing up decades ago. 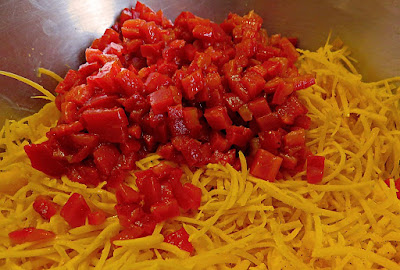 After all that, I set out to make some pimento cheese myself. It had been years since I had made or even eaten it, because even in regions outside the South in the U.S. it's rarely seen, and I haven't lived in North Carolina since the early 1970s. My mother used to make pimento cheese, of course, but now she doesn't because she has an allergy to bell peppers. Here in France, what cheese would I use? In the U.S., it's made with orange-colored cheddar, which I've never seen here. 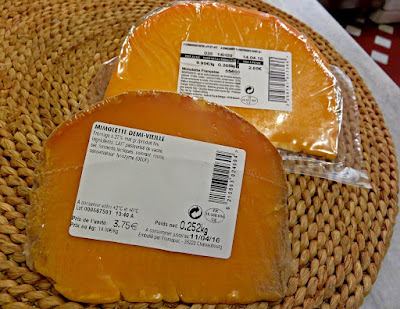 There is at least one orange-colored cheese here, though. It's called mimolette [mee-moh-LET] and it's made in France and in the Netherlands. Mimolette is a cow's milk cheese that comes in several styles, from young, fresh, and soft to aged, dry, and hard. When I went to the cheese counter at the supermarket, I found a fresh mimolette and then I noticed a mimolette demi-vieille. In other words, it's aged mais pas trop, so it's medium style. I decided that a combination of fresh and the entre-deux mimolette would be right for pimento cheese. (I also think it would be good made with a mixture of cantal and mimolette cheeses.) 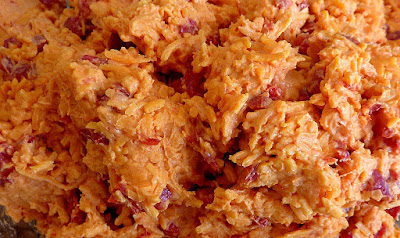 So what is pimento cheese anyway? It's a cheese spread made with grated cheese, roasted and diced red bell peppers (poivrons rouges), and a little bit of mayonnaise to serve as a binder and make it all into a spreadable mass. Americans in different regions have been making and eating it in sandwiches at least since the 1870s, from what I've read. Here's a history of pimento cheese that I think is interesting because it explains how the product, after being invented in New York, became a specialty in the American South. 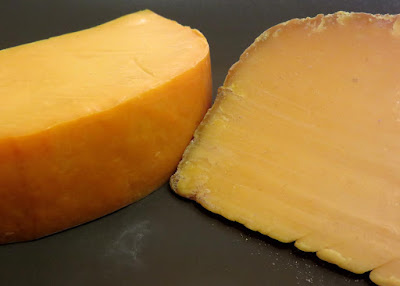 What I did was grate the two wedges of cheese in the food processor using the fine blade. There was about 500 grams of cheese in all — just over a pound. I diced up about 200 grams (7 oz.) of roasted sweet red peppers. Then I put all that in the bowl of a stand mixer and added about a third of a cup of mayonnaise and another third of a cup of cream cheese (fromage à tartiner, "spreading cheese," is a so-called "Philadelphia-style" cream cheese that I can get here nowadays in any supermarket). I used a combination of mayonnaise and cream cheese because it just sounded more appetizing to me than mayonnaise only 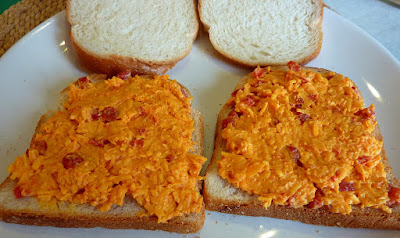 I could have made fresh mayonnaise, but since I needed so little for the recipe I decided not to. A third of a cup is just 5 or 6 tablespoons. Pimento cheese is not cooked, so you can make it up and adjust the quantity of mayo or cream cheese that you want in it to get the desired consistency. Add black pepper, some salt, some cayenne pepper to taste, and even some finely diced onion or garlic, as you will. 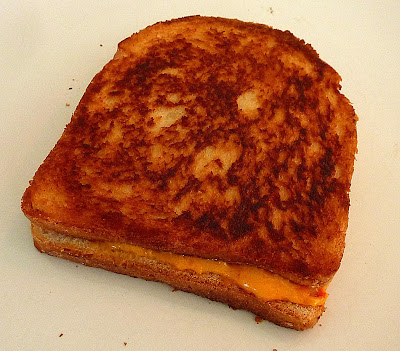 Spread the pimento cheese on slices of bread or on crackers to make either sandwiches or a finger food for snacks or apéritifs. You can make a grilled cheese sandwich with it, as we did. And I've read that people put it on ground beef patties to make a pimento-cheese cheeseburger. I haven't tried that yet but plan to soon.


As always, you can click or tap on the pictures to open them at a larger size in a new window.
Posted by Ken Broadhurst at 07:30