I saw Mme Doudouille at the market

I went to the outdoor market in Saint-Aignan yesterday morning, despite the dreary and drizzly weather. If I hadn't had a doctor's appointment in town at 8:30, I would have just stayed home. After the doctor's, I needed to go to the pharmacy, and the market is right there. Seeing Mme Doudouille  at the market was a pleasant surprise.
Walt and I wanted to get some asparagus, anyway. The locally grown ones are just coming to market. They're big fat while asparagus, which you have to peel before you cook them. I'll make a batch of fresh mayonnaise that we can have with the cooked asparagus at lunchtime today. I'll also be making œufs en meurette for lunch. That's eggs in a red wine sauce, as I described yesterday.
The surprise of the morning was a chance encounter with Mme D., one of the people we have most enjoyed knowing here over the years. I was standing around, waiting to be waited on at a produce stand, where only one young woman was working. The well-dressed, older woman customer in front of me in line was taking her own sweet time, ordering very carefully a lot of different fruits and vegetables. 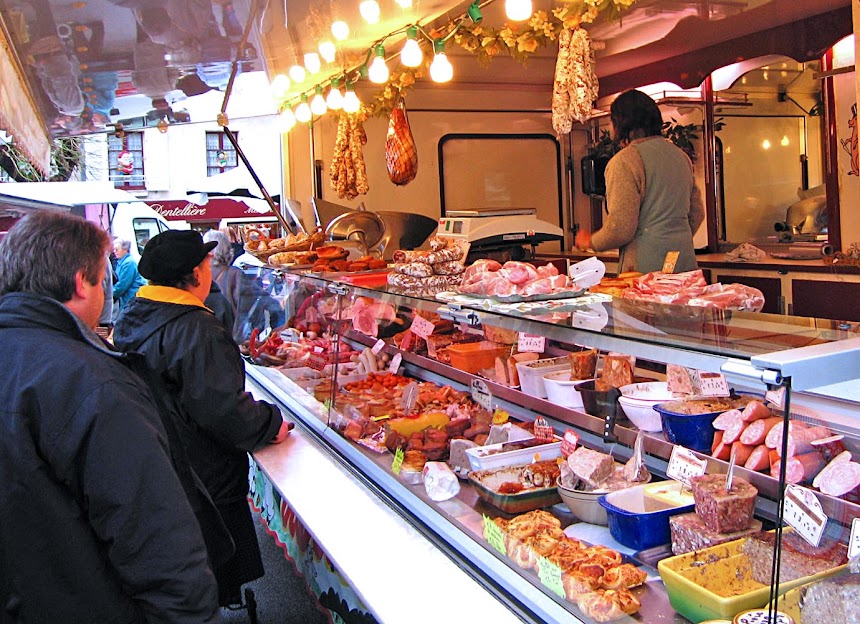 Above is Walt waiting in line at Mme Doudouille's market truck on New Year's Eve 2005 (more than a decade ago). I can't find a good photo with her in it.
Are these kiwis ripe? The last ones I bought were not, and it took them two weeks to ripen before we could eat them, she told the seller. Well, it's a matter of personal taste — that was the reply. Some people like them very ripe, and others don't. Well, I'll take two anyway, the customer said. And I'll have some bananas too, but I don't want ripe ones. I want them almost green. The woman working the stand had to dig around in a huge pile of perfectly ripe bananas (for once) to the find just the right green ones. And so on.
It was taking forever, but I didn't have anything else to do. The pharmacy I go to wouldn't be open for another 10 minutes. I looked over my shoulder and saw the woman we've always called Mme Doudouille greeting some other shoppers, and carrying a shopping basket herself. She used to be a vendor at the Saint-Aignan market. We bought charcuterie — sausages, ham, pâtés, etc. — from her for years. Here's a post I did years ago about her market truck and what she sold from it.
And I always enjoyed spending a few minutes talking to her when I stopped in front of her market truck. She's probably about 60 years old now, and she and her husband live in Blois, or just outside Blois. That's about 40 minutes north of Saint-Aignan. The last few times Walt and I had been to shop at the market, she hadn't been there. I'd been meaning to ask one of the other vendors whether she had retired.
Well, she has. That's what she told me when I asked her, calling her situation une pré-retraite. She said her husband had had a heart operation, and he had taken a year off. We used to see him at the market in Amboise on Fridays, back when we went to Amboise more often. His business was called Chez Doudouille, so we assume his name was Edouard, for which Doudouille is a nickname. I have no ides what M. and Mme Doudouille's real name is.
I'm surprised to see you in Saint-Aignan as a shopper, I told her. She said she just likes coming to our market do do her shopping, despite the drive. I guess she had done that drive in her truck for many years, so it became a Saturday morning habit. I told her about my three trips to the U.S. over the past year. She said her daughter might start coming to sell charcuterie at the Saint-Aignan market soon. Her husband is back at work after recovering from his surgery, but only for one more year. He also plans to retire soon.
This story doesn't have a punchline. I just enjoyed the experience of seeing and talking to a person I had sort of gotten to know over the years but probably won't see much any more. I remember one time her telling me, beaming, that her first grandchild had been born. A few years later, I asked about that grandchild, and she said her family had grown — she already had five grandchildren at that point! Earlier, she had told me that she and her husband planned to buy a hotel-restaurant in the Auvergne and move down there, but that plan fell through.
Since 2003, we've exchanged jokes and pleasantries, and stories about our respective families, when she had time to talk. Yesterday, she asked me to be sure to give Walt her greetings and good wishes. Over the years, Mme Doudouille has given me cooking ideas and advice, whenever she had time. Always, she would pick out the nicest sausages, cuts of meat, and pâtés and salads when I ordered. Often she would throw in some special treat, on the house. She always had a smile and good laugh.
I wish I had taken my camera with me yesterday. No more photos here — you'll have to click on the links in the text if you want to see photos.
Posted by Ken Broadhurst at 07:30