Two weeks ago, les parties hautes (the upper levels) of the Panthéon in Paris were re-opened to the public. The 18th-century monument, located in the center of the Latin Quarter, has been undergoing major renovations for several years.


I was surprised when I heard about le balcon du Panthéon, because I don't think I was ever aware that visitors were allowed to go up there. The "balcony" offers a 360º view of the Latin Quarter, the historic center of Paris, and much of the city. I want to go up there this year. Walt might go on May 2, when he'll be in Paris on his way to Montréal and New York.


You might know that I really enjoy seeing Paris from on high. In my life, I've been up to the top level of the Eiffel Tower three or four times (1970, 1997, 2007...) that I can remember. Walt and I climbed the stairs up to the Eiffel Tower's first level, and maybe the second, some 25 years ago. I've been to the top of the Tour Montparnasse as many times, with Walt, CHM, and my friends Evelyn and Lewis (last year), among others. The links here will take you to some of my photos.


A few years ago, when it was first opened to visitors, I climbed up 300 steps to the top of the Tour Saint-Jacques, which stands square in the middle of the city. I took dozens... nay, hundreds... of photos from up there. You can see many of them in these blog posts.


I have good memories of going up into the towers of Notre-Dame and out onto the rooftop with Walt in maybe 1988. « Monte là-dessus — tu verras Montmartre », we joked. We also went up to the top level of the Arc de Triomphe one year — at least 20 years ago — and, around that time, up into the Grande Arche de la Défense, west of Paris proper, for the views from there. 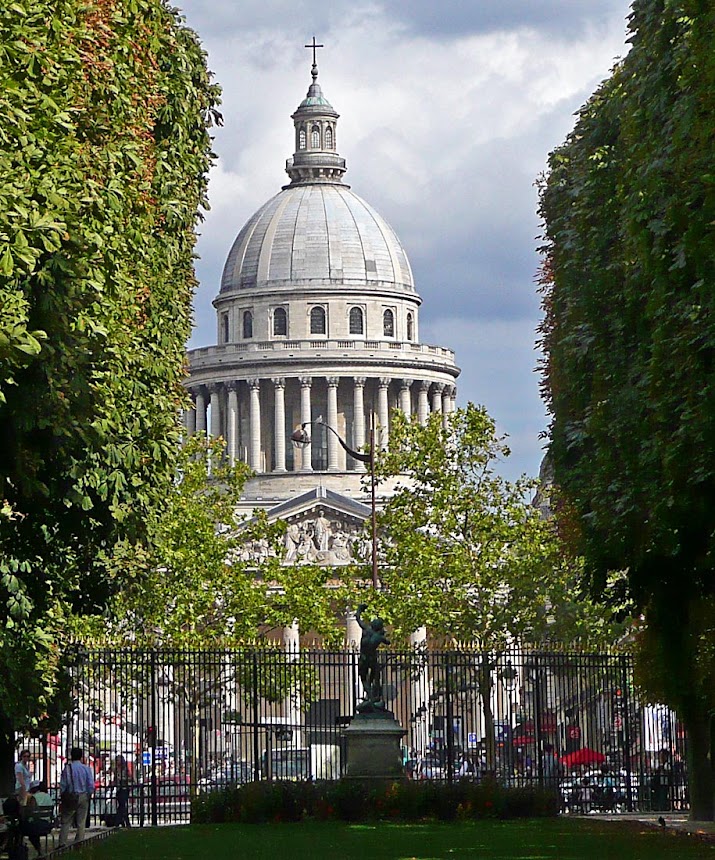 The Panthéon as I saw it from the Jardin du Luxembourg in August 2009. You can see several other photos of the Panthéon by clicking on this link or this one.


So how have a remained ignorant of the balcony of the Panthéon all these years? I worked in the shadow of the monument back in 1974-75, when I was on staff at the University of Illinois Year Abroad Program. We had our office on the rue Soufflot, just down the street. As early as 1970, on my first trip to France, I spent two weeks in a hotel just down the hill from the Panthéon, near the Place Maubert. I was a teacher at the nearby Sorbonne in 1975-76.


Despite all the time I spent in the neighborhood, I never knew I was missing out on a chance to go up to the balcony that surrounds the base of the dome of the Panthéon. Now I have all these digital cameras to take up there with me. I can't wait to go this summer. You have to pay the 8.50€ entry fee to get into the Panthéon, plus a 2.00€ surcharge for the guided tour up into the parties hautes du monument. Not bad.

By the way, yesterday I was wondering how high the Panthéon balcony is compared to the top of the Tour Saint-Jacques. Walt looked it up. He found a site that gives not only the height of the buildings but also the altitude above sea level of the ground that various Paris monuments stand on.

It turns out that the Tour Saint-Jacques is built on ground that is at 35 meters above sea level, and the top of the tower is 54 meters above ground. That means that when you're up there, you're at about 89 meters (or some 290 feet) above sea level.

The Panthéon, built on top of the big hill called La Montagne Sainte-Geniviève, stands on ground that is 58 meters above sea level, and the staircase (200 steps) that leads up to the balcony is 35 meters tall. So when you're on the balcony, you are at 93 meters, or about 305 feet, of altitude. I think I got all that right.

Here are links to several web pages in French, with photos, about the Panthéon and its balcony: easyvoyage.com, the newspaper Le Parisien, franceinfo.fr, and paris-pittoresque.com.
Posted by Ken Broadhurst at 07:30