Photos of the web and for the Web

Well, it's more than one web, actually. It's at least four. And five photos. On sunny mornings in late fall and early spring, when things are dewy out in the vineyard, I'm always surprised to see how busy the resident spiders have been. 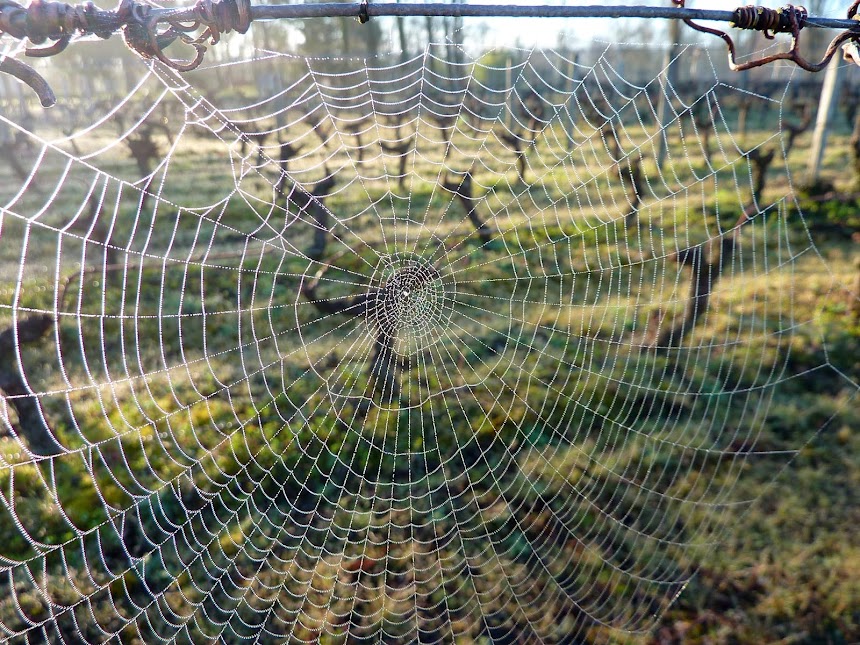 As I mentioned yesterday, I have been experimenting with three different cameras over the past few days. Why? Because I'm still not completely satisfied with the two new digital cameras I bought about a year ago. The images they produce are frequently disappointing. 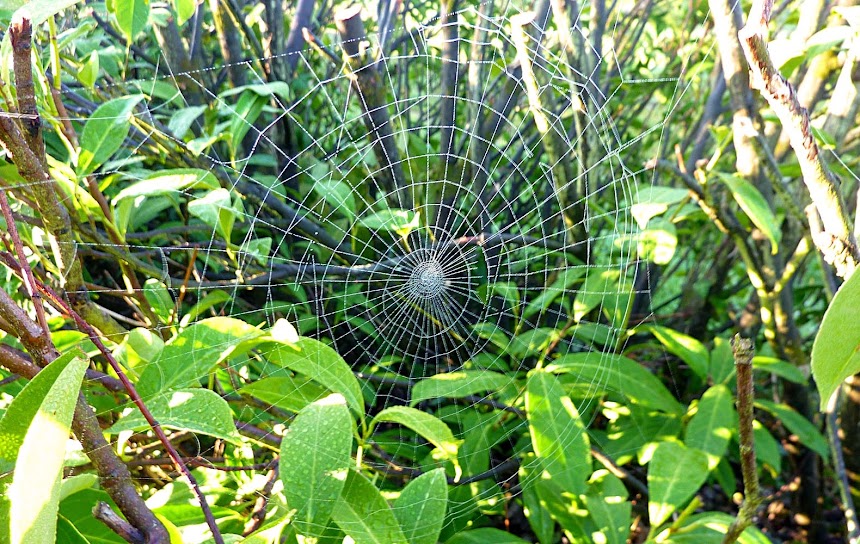 One of the newer cameras is a Canon model (SX700 HS) and the other a Panasonic (Lumix DMC-TZ60). Both have a 30x zoom. The third camera is one that I use in the kitchen, and it's now seven years old. It's also a Panasonic (Lumix DMC-ZS1) but with "only" a 12x zoom. By the way, the Panasonic camera model names are very confusing because the same camera is often goes by one name in Europe and a different name in the United States. (The European TZ60 is called the ZS40 in America, for example.) 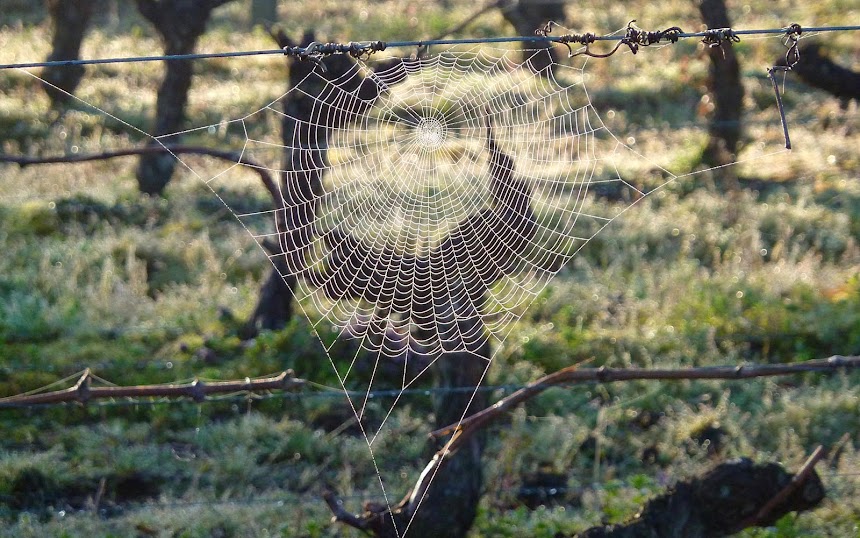 In reading reviews about different cameras, I learned something interesting. A few years ago, camera manufacturers starting using image sensors or capteurs (the element that serves as film, if you will) that use a different technology, because they are less expensive, faster, and can capture video at higher resolutions than the sensors they had been building into cameras before. I think the new sensors also make longer zoom lenses possible and more affordable. 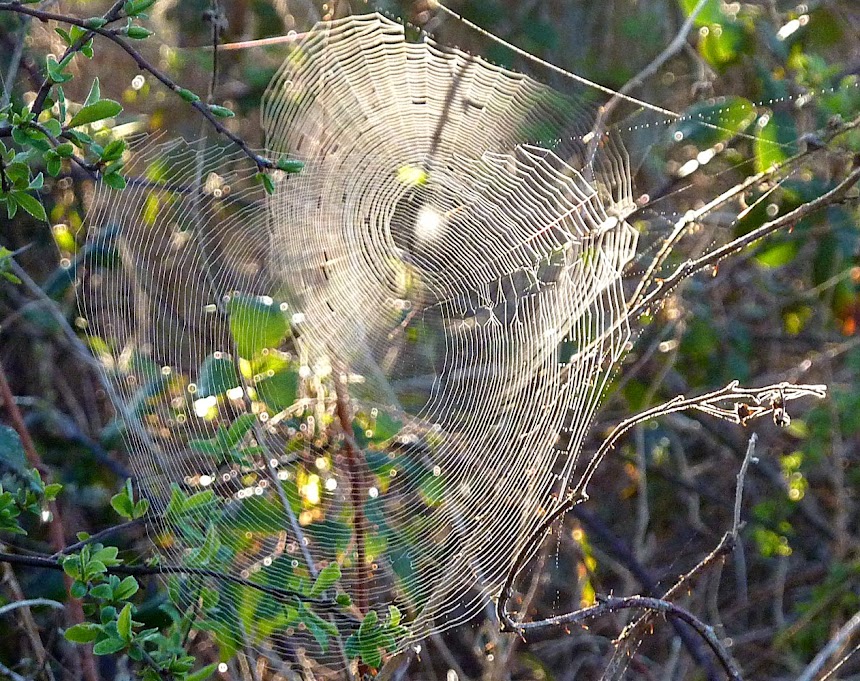 The new sensors are CMOS devices, whereas the older ones were called CCD sensors. While CMOS sensors have the advantages I listed above, the fact is that they don't capture still images with the same clarity or crispness as the older CCD units. I think CMOS sensors might work better in larger, more expensive cameras, but not so well in the smaller "pocketable" cameras I prefer to use. 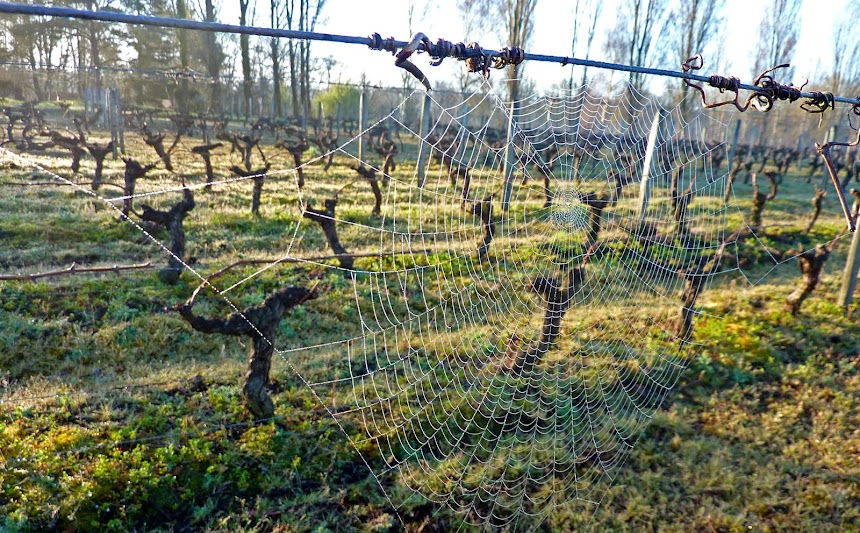 That explains my struggles with my newer cameras. The older Panasonic model is the one I used to capture all these spiderweb images. It has a CCD sensor. The problem with it is that it is very slow to react when I press the shutter button. So... I have ordered myself a "new" old camera. It's one of the last ones in the Panasonic Lumix line that was made using the CCD technology, the Lumix DMC-ZS8 — also known, I've learned, as the TZ18 in Europe. I'll let you know how it goes. Or you will see for yourself...

If you are really interested, you can read this Camera Labs review of the ZS8. The reviewer compares it to the supposedly "more advanced" Lumix of the time, the ZS10, into which Panasonic put a CMOS sensor. The article was published in 2011.
Posted by Ken Broadhurst at 07:15