The reward: lunch at La Villa in Montrichard

The reward for the work we got done out in the yard and garden this week was a fine lunch in a restaurant yesterday. We drove over to Montrichard and went back to the place where we had a good meal back in March. It's called La Villa. The restaurant already has its outdoor seating area set up for the summer, but we ate indoors. 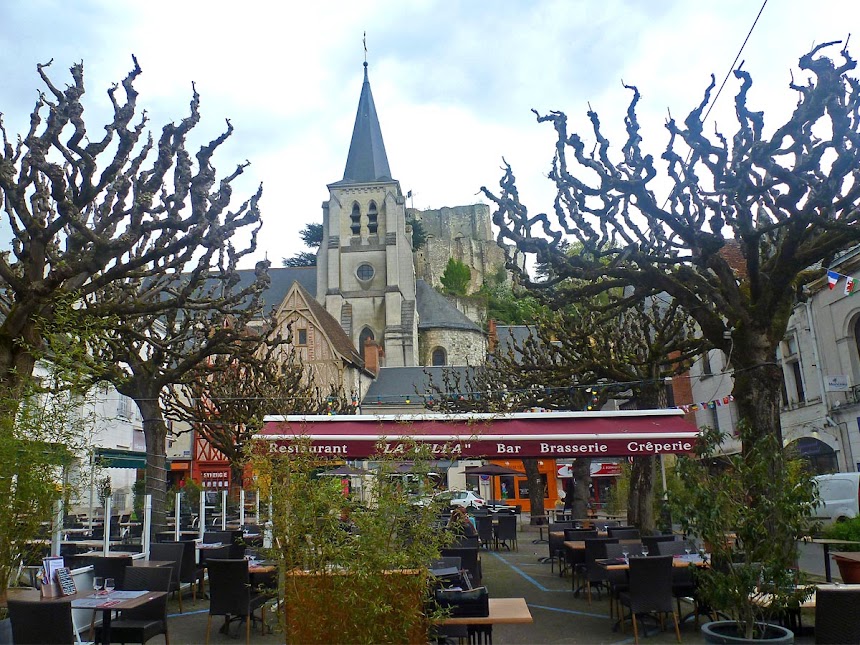 This time we didn't have hamburgers. We had the restaurant's nicest menu, which is priced at 26€ and includes three courses: entrée, plat principal, et dessert. In French, the entrée is the first course, which in the U.S. we might call the starter or the hors-d'oeuvre. Mine was a Burgundian specialty called œufs en meurette. 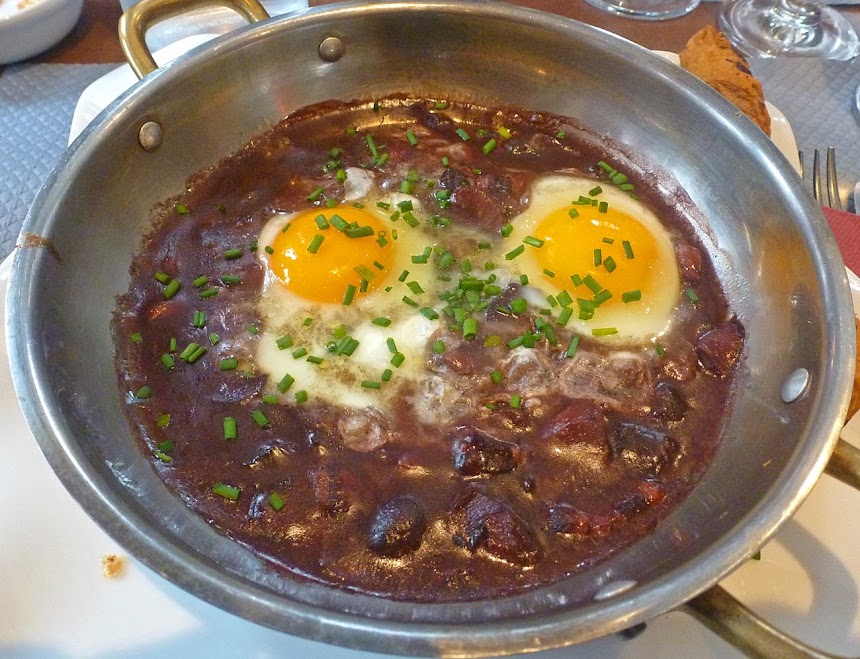 We joked that the egg dish might aptly be called œuf bourguignon, because the meurette sauce is the same as the sauce that is served with that other Burgundian specialty, bœuf bourguignon: red wine, mushrooms, onions, and the chunks of smoked bacon called lardons. 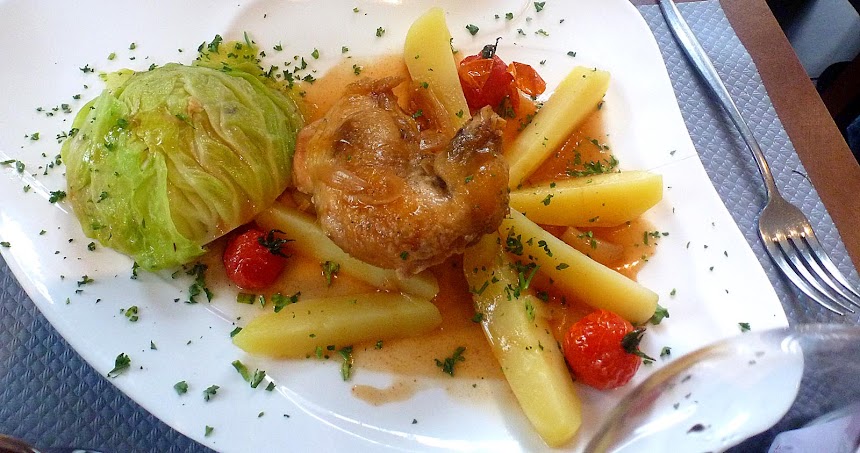 Meanwhile, one of the main courses was a suprême de pintade — a guinea hen breast/wing piece. The pintade was served with cabbage leaves stuffed with chopped cabbage and lardons, along with some steamed potatoes and cherry tomatoes. Our friend Nick had that, and his wife Jean had a seafood brochette (below) with shrimp, salmon, and other fish, served with nice vegetables. 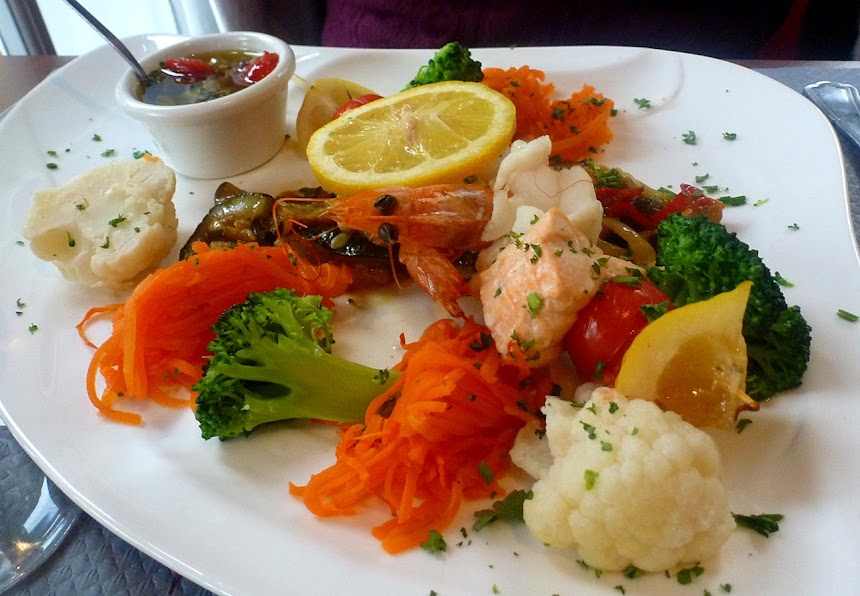 As our main course, Walt and I both had a slow-cooked souris d'agneau — literally, a "mouse of lamb" — which is what we call lamb shank. It's called a souris because of its plump, round shape. Problem is, in the excitement of it all I forgot to take a photo. It was falling-off-the-bone tender, and tasty. I'll have to go back and have it again sometime, and maybe get a picture. 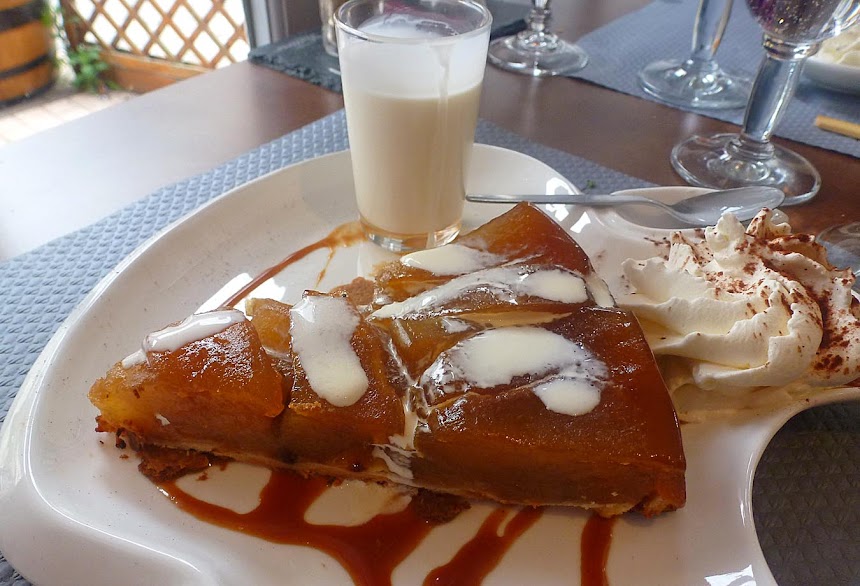 Finally, above is one of the desserts, a tarte tatin served with a glass of crème à la vanille and a good squirt of whipped cream. Tarte tatin is a caramelized upside-down apple pie. With drinks, wine, and coffee the price of the meal was about 35€ per person. Here's a post about a lunch we had at La Villa with a group of Australian friends back in May 2012.
Posted by Ken Broadhurst at 07:15