Yesterday morning at about 7:30, Callie went wild barking. She normally stays upstairs in the loft until we go on our walk around 8:00 and sometimes she'll bark if she sees a bird in the trees just beyond the skylight windows. This was a different bark, however — it was wilder, louder, and longer-lasting. It was a hot-air balloon going over. She can hear them long before we do. I snapped a photo.

Hurricane news: The eye of the storm crossed over the coastline just east of Morehead City a few minutes ago. I've been watching it on the local NWS radar site. There was a tornado warning for the area from about 4 p.m. to 2 a.m. yesterday. I haven't see any news of tornadoes or exceptionally strong winds, so I assume all is well. When the eye of the storm to the north and east of the area, the wind shifts direction, blowing from the north. A lot of water can be pushed up toward the southern end of the shallow but expansive Pamlico sound and there is a risk of flooding in Morehead from the north side (it's on a peninsula). I'll find out more later. 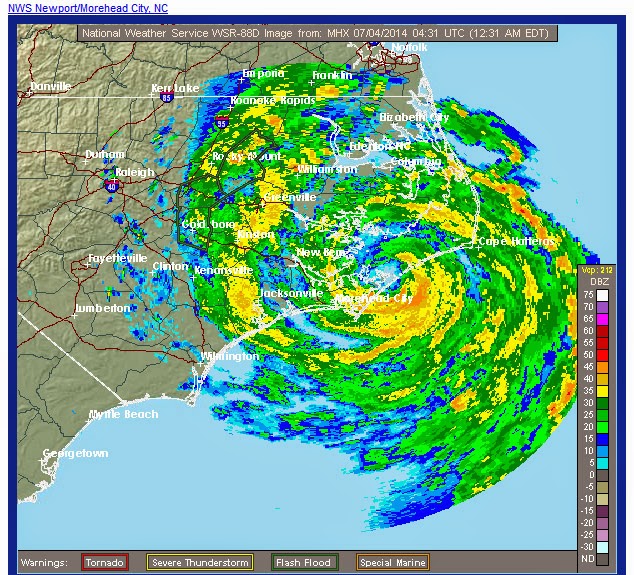 It's not easy to read the town names on this map, but along the coast from southwest to northeast, you have Myrtle Beach, Wilmington, Jacksonville, Morehead City, and Cape Hatteras.


It seems that this is the earliest hurricane to affect the North Carolina coast since record-keeping began in 1851. The earliest previous hurricane hit on July 10 in 1901. Today's storm came ashore with 100 mph winds (160 kph). The big dangers for the N.C. coasts are tornadoes, flooding, and significant erosion of the Outer Banks islands. The road that runs along the strip of sandy banks often washes out in such storms. Here's a link to an article in the Raleigh News & Observer.

Our friends Jill and Peter arrived from California yesterday afternoon. The weather was hot (by Saint-Aignan standards) and we were able to sit out on the terrace until late into the evening. Walt grilled some chicken breasts on the barbecue and we had salade macédoine (mixed vegetables in a mayonnaise sauce — thanks, Martine) and taboulé (bulgur with diced cucumber, tomato, parsley, and mint with a lemon juice dressing) alongside. Then we tasted a couple of Auvergne cheeses (Cantal and Bleu d'Auvergne) before we plunged into a box of See's chocolates that J & P brought with them.
It was a pleasant evening, to say the least. This morning it's raining and I've seen lightning off in the distance. It's supposed to be stormy all day. We have reservations for lunch in Bourges at noon. Damn the rain.
Posted by Ken Broadhurst at 07:00