Yesterday I did something I haven't been doing that much recently, because the weather has been so rainy. I went to the market. There is an open-air market on Saturday mornings in Saint-Aignan, and then there's another on Sunday mornings across the river in Noyers-sur-Cher.

The best vendor at the Noyers market is a volailler — a poultry merchant. There are always a lot of people standing in line there, waiting to be served, but yesterday it wasn't too crowded. The weather was nippy but sunny, so waiting outdoors was not unpleasant. And all the food in the display cases — all kinds of chicken, duck, and turkey sausages, and pâtés made from rabbit or duck, for example — was, as always, highly appetizing. 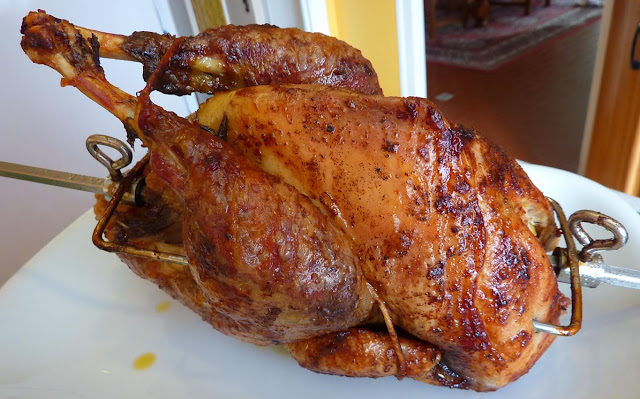 But I resisted all that. I was on a mission to bring home a nice farm-raised pintade — a guinea hen — or, at the very least, a plump chicken. I ended up with a 1.8 kg guinea hen, which the man behind the counter prepared for the oven by gutting it, cutting off the head and the feet, and burning off the last of the bird's pinfeathers with a blow torch. 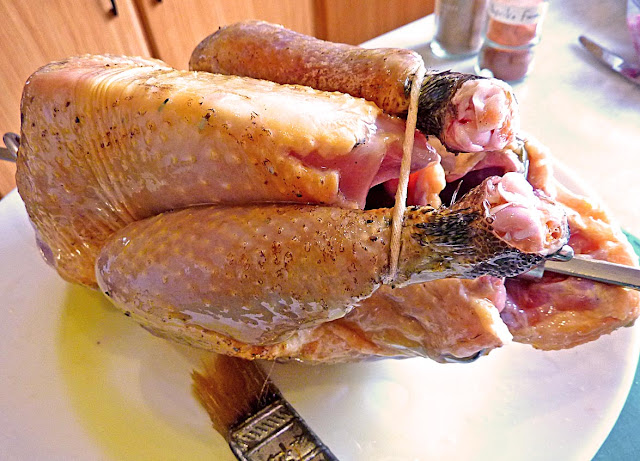 When I got it home, all I had to do was tie the bird up and put it on the spit for roasting in the oven. After brushing it with olive oil, Walt and I sprinkled the pintade with smoked paprika, cayenne pepper, salt, and pepper. I set a pan of water in the oven under the bird to catch the drippings as it turned on the rotisserie to cook and turn golden brown.

At the market, the poultry man had instructed me to cook the pintade in the oven slowly for 90 to 120 minutes, basting it liberally. « Il faut une cuisson bien arrosée », the man told me with a big smile. « Et il faut en mettre sur la pintade aussi. » I'm not sure I can translate that joke.
Posted by Ken Broadhurst at 07:45