US Airways flights, which are the ones I take most of the time when I come to the U.S., depart out of the old Aérogare 1 at Roissy-Charles-de-Gaulle, as we used to call the "new" airport north of Paris. I actually remember when the airport opened back in 1973. It was considered to be very futuristic at the time, with those conveyor-belt sidewalks in glass tubes to take passengers from one level to another inside the big round building.

Now the term Aérogare has been replaced by Terminal (anglicization) and number 1 exists in the shadow of the much larger Terminal 2 at Roissy, which Americans call CDG. I still call it Roissy, but I'm not sure how many people even understand what I mean. Older French people do, anyway. Air France's flights leave from Terminal 2, but US Airways and other foreign carriers fly out of Terminal 1. Since I've lived in France,
I've become re-acquainted with the old building, often re-modeled, after years of flying Air France from San Francisco to Roissy Terminal 2. 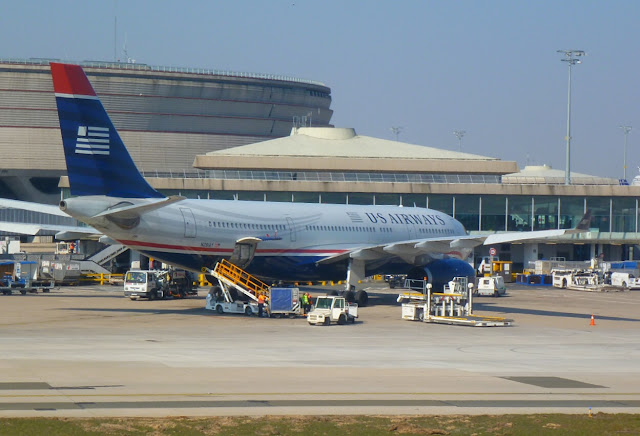 Have I said often enough how much I enjoyed my CDG-CLT (Charlotte) flight on Tuesday afternoon? The plane appeared to be a brand new Airbus, with comfortable seats, enough legroom in coach, decent food, and a big seat-back video screen featuring a wide selection of movies and TV shows. All American — no French movies — but it is US Airways, after all. 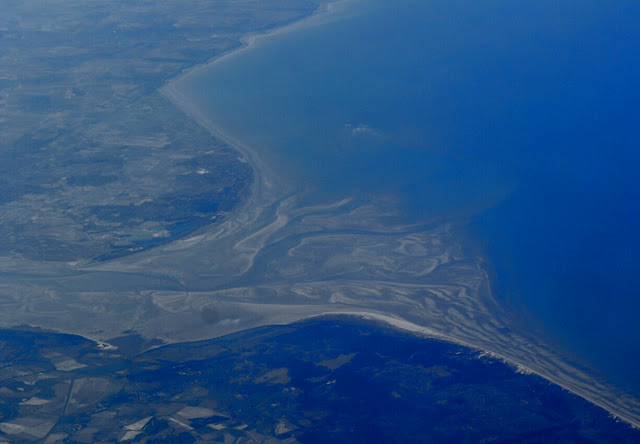 Lifting off over the northern French landscape of compact villages set in farmland divided into neat, separate fields of varying shapes, we soon reached the coast and began to cross the Channel. I was seated by a window right over the wing, so I had only a partial view of the ground below us. Despite that,I noticed this wide sandy estuary and thought to myself: "That must be the Baie de Somme."  I've never been there and know it mostly from TV documentaries. I looked at the satellite view in Google maps and I'm pretty sure I've identified it correctly. 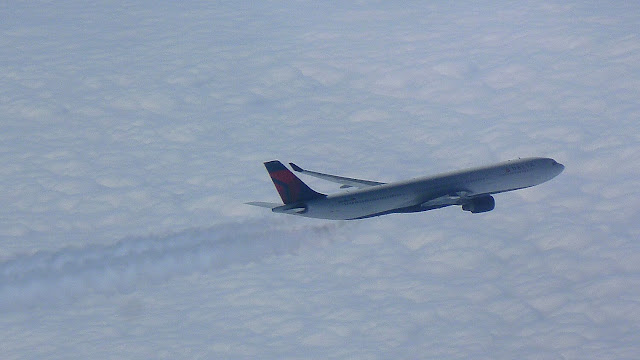 As we flew out over the Atlantic, we were also above a thick cloud cover, so there was nothing much to see besides the movies on my screen. At one point, I pulled up my window screen and saw another passenger jet flying along beside us. The two jets flew in tandem for quite a long time, and finally I took out my camera and snapped a few pictures like the one above. 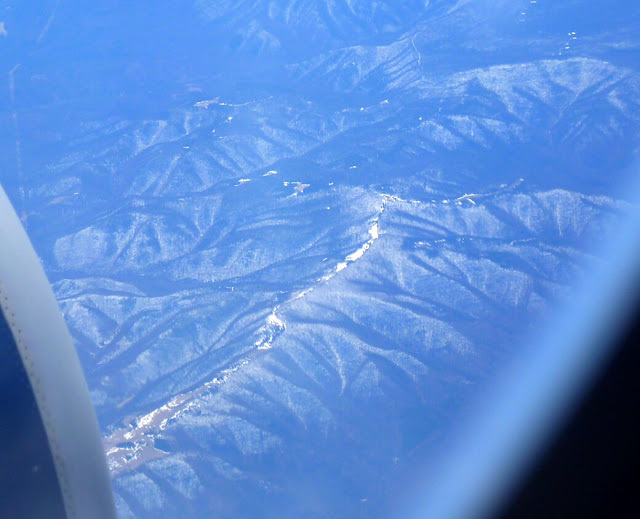 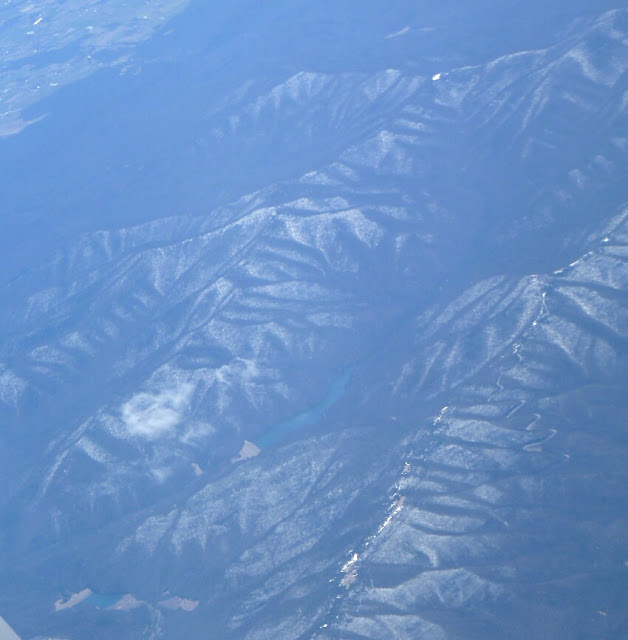 At lunchtime in eastern North America, we were flying over the province of Québec, and as we were directly over Montréal I thought about what a good time Walt and I had there last May, including a nice lunch with The Beaver and her husband. Then we flew on down the Appalachian chain of mountains toward Virginia, Tennessee, and the Carolinas. I could see some snow on the mountaintops (photos above). We arrived early in Charlotte, and I breezed through passport control, customs, and security. I was moving pretty fast for a 75-year-old (!) codger.

Temperatures here on the Carolina coast are supposed to get up to 27 or even close to 30ºC (84ºF) by the end of next week, with bright sunny conditions (eat your heart out, you who live in the Loire Valley and northern France). Maybe I'll finally get out and take some pictures here in North Carolina.
Posted by Ken Broadhurst at 04:48