Monday afternoon in Rock Hill, we went looking for relatives. Or at least their houses. My mother and her sister were born in Rock Hill, South Carolina, in 1930 and 1936 respectively. My grandfather was born there too. His sister (my great-aunt) and her clan of a family lived out, or are living out, their lives in that area. It's just 25 miles south of Charlotte, N.C., the largest city in the Carolinas.

My grandfather's sister and her husband, who were born in the 1890s, lived on a farm. They had about 200 acres of land. The first time we went to visit them was in 1960, when I was 10 or 11 years old. We found ourselves in a different world. Though we considered ourselves poor, we lived in a town on the coast, with sewer mains, running water, television, and two cars. We spoke with a brogue that a lot of outsiders still think sounds like old (Elizabethan) English. 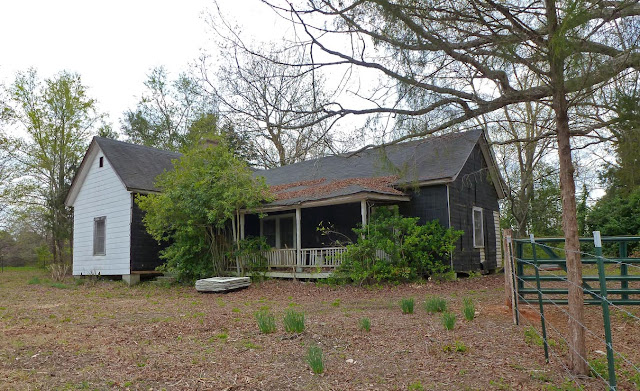 The house Aunt Ray and Uncle Al lived in is being restored by one of their grandchildren.
First step: strip off those old asbestos shingles on the exterior walls.

The South Carolina relatives lived in what we thought were rustic (if not primitive) conditions far out in the country, and they spoke with a broad Southern drawl so strong that we at first found it hard to understand them. They had chickens, guinea hens, and dogs running loose in the yard. They milked their cows every morning and churned butter. They ate rice at every meal (an old South Carolina tradition). In the kitchen, they had a pump for cold water and no hot water at all. There was a dipper hanging on the wall over the sink that everybody drank out of. And the plumbing — well, there wasn't any. There was an outhouse (a privy) on a creek a few hundred meters from the house down an overgrown path, and there was a shower house out in a shed in the barnyard.

Aunt Ray (her name was Annie Ray) and Uncle Al (Allen), who were my mother's aunt and uncle — had four children — a girl and three boys. By 1960, all of them were in their late 30s or 40s and had children of their own. Each of the boys was given 50 acres of land by the parents when they reached adulthood, and the daughter, who became a teacher, got some money. Now only one of my mother's first cousins is still living. 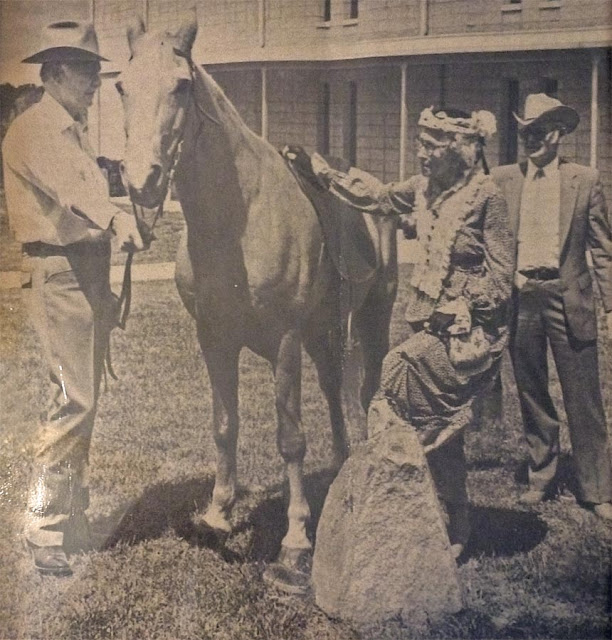 At age 88, Aunt Ray, in period costume, participated in a ceremony to mark this rock as a
local historic feature. Women stepped up on it to mount their horses when they left church
on Sunday mornings in centuries past. Cousin Pete is standing behind his mother.
And we found him on Monday. We went driving around in the rural area east of Rock Hill, where we knew we would be able to find Aunt Ray's house. Walt, my mother, and I had actually found in earlier, back in 2006, when we drove through on our way back from Atlanta to to the N.C. coast. The house was abandoned, the yard overgrown, the doors open. My mother and I — trespassing, I guess — walked through the house to see what condition it was in (it was a mess) inside. This time, the yard was all cut back, a new fence had been put up (to keep people like us out), and the house was obviously being worked on.

In 2006, my mother remembered where her oldest cousin, Al Jr., lived, and we went to his house. Nobody was home. This time, we didn't know what to expect. After looking at and taking photos Aunt Ray's old house (Uncle Al died in 1971), we drove on down a narrow country road to see what else we might recognize. Just a few hundred meters from the old farmhouse, my mother and aunt saw a house off to the left. "That's cousin Pete's house," they said. They weren't absolutely sure, so we didn't stop. 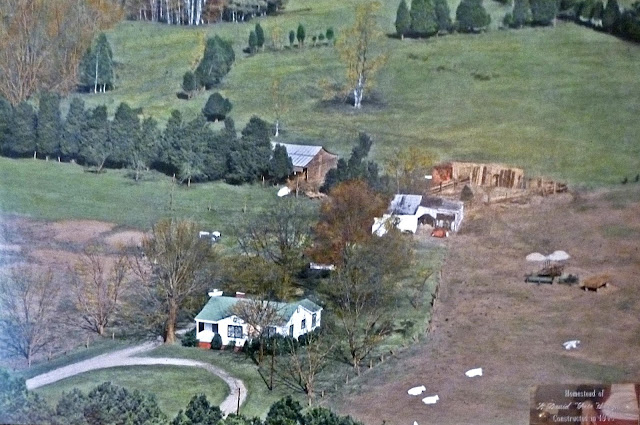 Cousin Pete's property outside Rock Hill, S.C.
"There was a man on a riding mower back there," my aunt said. "Let's go talk to him. Maybe he knows everybody in the area." We turned around and went back. We turned into a driveway and the man on the mower just happened to be cutting grass right here. I stopped the car and we rolled down the windows. He turned off the mower. My mother called out, "We are looking for Pete or Allen X, our cousins." The man looked perplexed. " I'm David X," he said.

"Well, Pete is my father," the man on the mower said. We asked if he was still living (Pete was born in 1927). "Yes, he is," the man said. "He lives just down the road." David pulled out a cell phone and called his father. "Dad, we have company. It's our cousins from North Carolina. Are you decent? Can we come over?" The answer was yes, so off we drove, following David on his riding mower. 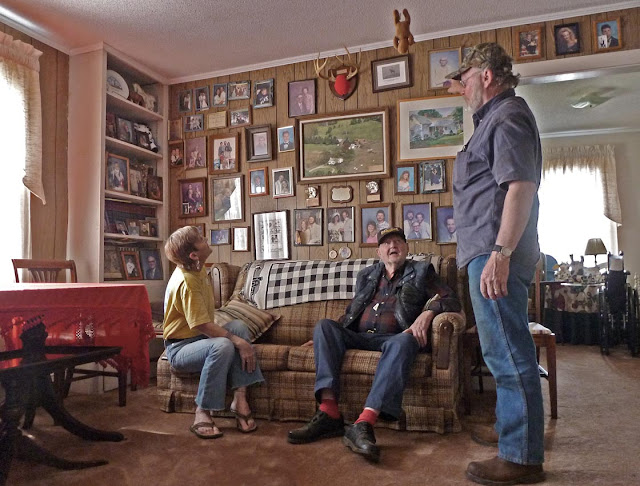 My sister with Pete (our first cousin, once removed) and David (our second cousin) in Pete's living room,
in front of the "family picture wall"
So we met Pete (age 86), as well as David (born in 1949, the same year as me), another of Pete's sons (Dale, born in 1964), and two of Pete's grandsons. We spent an hour or so talking, getting re-acquainted. We hadn't seen Pete since the 1960s, as far as I know, even though we went to visit his mother (Annie Ray, or Aunt Ray, as we knew her) periodically through the 1970s and '80s, until she died in the early '90s at age 93.

We talked those visits of ours so many decades ago. I told David and his father about my memories of fishing in the pond on the old farmstead as a young boy and catching a snapping turtle, which Uncle Al told me to throw on the ground fast before it bit one of my fingers off. My sister related memories of going horseback riding at Pete's (he raised horses and cattle) with other cousins back in the 1960s. We learned that the other two brothers, Al Jr. and Joe (named after my grandfather, whose name was Joseph Allen Miller), are deceased, and the daughter, Virginia, too. Pete is the sole survivor of his generation, along with my mother and aunt, his only first cousins. 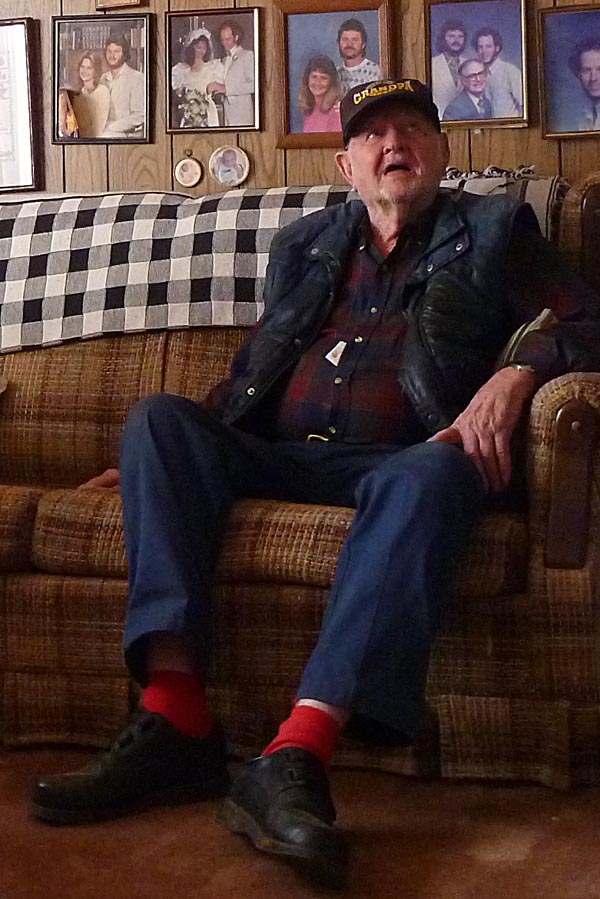 At 86, Pete's health is failing, unfortunately. His sons take care of him
so that he can still live in his own house.
Pete didn't say much, but he listened like a hawk as we talked with David and his brother Dale. When Dale (young at 49) arrived — attracted, I believe, my the sight of a strange car in his father's driveway — he went around the room and introduced himself to my aunt, me, my mother, and my sister. When he came to the end of the "receiving line" and greeted his father, Pete shook his son's hand and said, "Hi, I'm Pete." We all had a good laugh. He repeated the "Hi I'm Pete" joke with his two grandsons when they arrived, also attracted by curiosity about the strange car in the driveway, I'm sure.

I'm so glad my mother and aunt insisted we stop and talk to the man who turned out to be my second cousin David. The visit brought back a lot of good memories for all of us. I never knew my mother's parents, who both died young. At least I've been able to meet and get acquainted with the South Carolina side of the family one more time.
Posted by Ken Broadhurst at 06:15