Okay, it's over. Summer was short and hot. I'm only half joking. For the next week, we're going to have rain or, at best, showers, with high temperatures in the 50s and 60s F. That's the way it is in this part of France. When there's a pretty day, you'd better take advantage of it.


I haven't blogged much about food since I got back home just over a week ago. That isn't because I haven't been eating and enjoying good food. Actually, I brought back two pounds of N.C. barbecue (pulled pork), frozen solid when it left the U.S. in my suitcase. It was only partially thawed when I got it home. I wanted Walt to be able to taste it, since he hasn't been to North Carolina since 2006. But I had done enough blog posts about N.C. barbecue, so I spared you.

Field peas are smaller and redder than standard black-eyed peas.


What else have we eaten? Well, Walt made pizza last weekend, and it was delicious as usual. He's also been making very good coleslaw with shredded cabbage and grated carrot, mayonnaise, yogurt or cream, mustard, celery seeds, and a little vinegar. Speaking of cabbage, we also enjoyed fresh collards from the garden, and we put at least six servings into the freezer for later. We had steak a couple of times, because Walt bought a big boneless rib steak (entrecôte) from the drive-up butcher just before I got back home. And we made chicken wings with a dry rub of smoked paprika, cayenne pepper, cumin, thyme, and salt and pepper.


There's been a definite and clear North American bent to our cooking for the past week, I realize now. 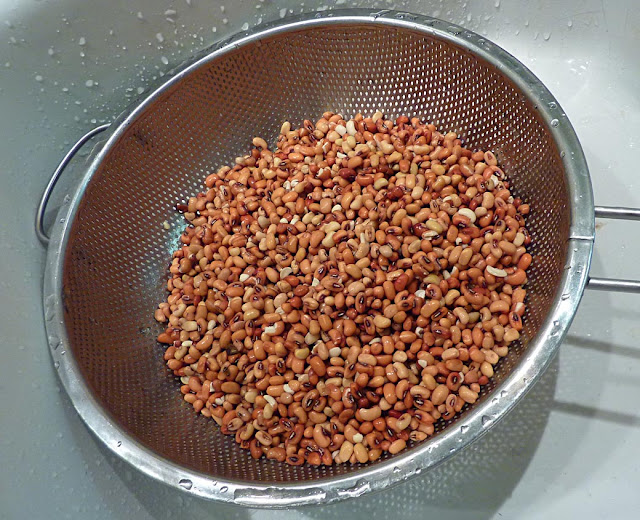 These are field peas that I soaked overnight in cold water to prepare them for cooking.


Today I'm cooking field peas and chicken gizzards. Most people who read this won't know what field peas are, I imagine. They're a Southern specialty, and I brought back two bags of dried ones from N.C. Field "peas" are not peas but beans, just as black eyed peas are beans and not really peas. For us in N.C., "peas" was the word used for field or black-eyed (or crowder) "beans" — while green garden peas were called "English peas" for clarity's sake. All the pea beans — field, crowder, and black-eyes — are varieties of the beans called "cowpeas," and each has its own special flavor and texture. They were first domesticated in Africa, according to what I've read. 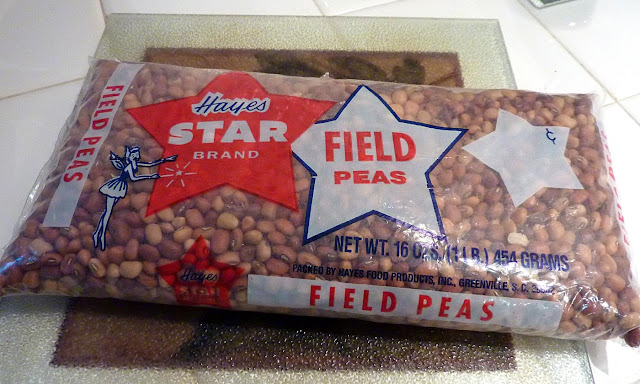 I found these in a Food Lion supermarket in North Carolina.


Black-eyed peas are called « cornilles » in France, but most people I talk too aren't really familiar with that term. I buy them imported from Portugal (but often labeled "Produce of the U.S.A). I have no idea what field peas or crowder peas would be called in France, because I've never seen them here. In the U.S., people usually buy them in cans, already cooked, the way we buy white or red beans in tins here in France. In fact, when I bought bags of dried field peas in a Food Lion store in Morehead City, N.C., my mother said she didn't think she'd ever seen them sold that way before.

Beans and peas are good all by themselves and they can make a full meal, of course. Cook them in unsalted water with an onion, a garlic clove, a bay leaf or two, some black peppercorns, and a couple of cloves (clous de girofle). Cook them over low heat for a while, until they are tender, and add salt at the end of the cooking time. They say beans with rice will give you a complete protein, but you know me: I like meat with my beans. Usually, pork is the best, either in the form of smoked or salt-cured cuts, or sausages. 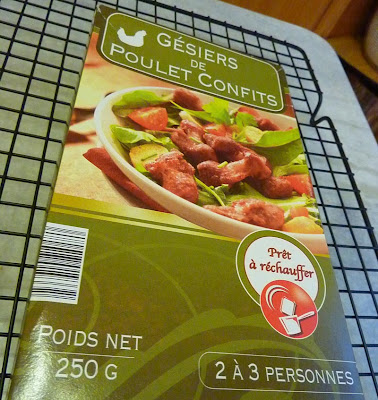 Today, we're having field peas with chicken gizzards — that's gésiers de poulet and it's a French specialty, I guess, though people in the U.S. South obviously eat gizzards too. In France, we usually have duck gizzards, and the chicken gizzards I bought the other day at the supermarket are in fact slow-cooked in duck fat. They are confits — there's no good English word for that kind of preparation, as far as I can tell. All they need is reheating. Optionally, they can be sauteed until slightly browned in a frying pan. The duck fat will flavor and enrich the cooked beans.


Whatever kind of beans you use, this is good chilly-weather food, and chilly weather is what we are expecting for at least the weekend. Bon appétit...
Posted by Ken Broadhurst at 08:45