Suddenly, yesterday, it was summer. We spent a good part of the day outside, working in the garden. The weather was summery for Saint-Aignan: a high temperature near 25ºC — 75ºF — and bright clear skies. I actually got a little bit sunburned. But don't worry, the fine weather is not supposed to last beyond today. Tomorrow, they're telling me on Télématin as I type, the high temperature will be much cooler. And rain is coming through.
The nice thing is that my allergy symptoms went away at just the right time. As I suspected, when that low pressure spinning over Corsica moved off to the east, the wind direction changed here and we got air with much less noxious pollen in it — at least for me. Maybe that will turn out to be the extent of my springtime allergies in 2013. 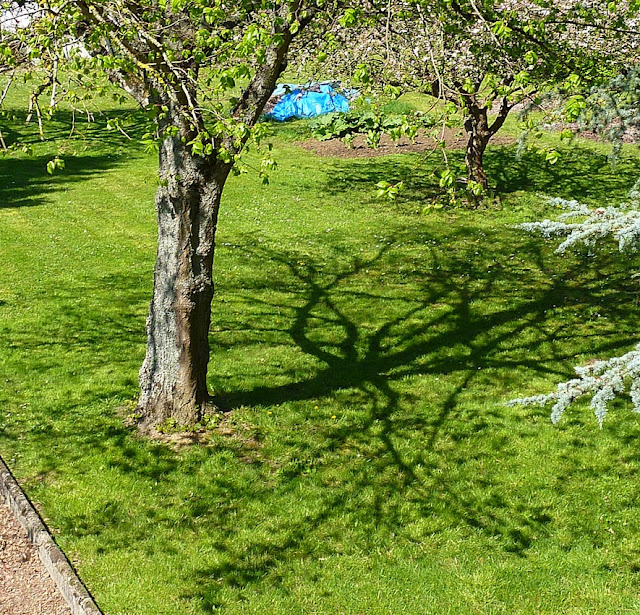 Nice shadows yesterday. Under the blue tarp is one of the piles of debris that we burned.
Speaking of 2013, yesterday marked the tenth anniversary of our ownership of this house outside Saint-Aignan. On April 24, 2003, the closing (les signatures) took place. We were in California, and we had sent money and given power of attorney to our notaire (a government-licensed contracts lawyer) in Montrichard to sign for us. We didn't actually arrive in Saint-Aignan until early June. That was the summer of the great heat wave — la grande canicule. 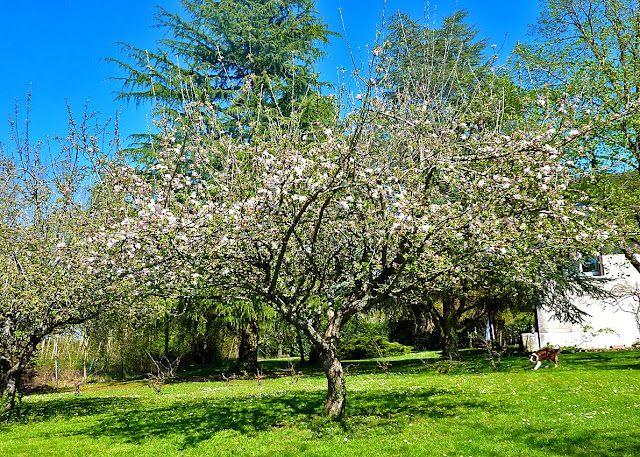 The yard is in better shape than it was 10 years ago. Now apples trees are starting to flower.
And what a mess the place was then! Well, we knew the house was a mess and needed a thorough cleaning, not to mention a lot of painting. But we had neglected to think about the yard and how much all the grass and weeds would grow up between the middle of April, when the previous owner let her gardner go, and the beginning of June. Everything was at least knee-high — mostly higher. 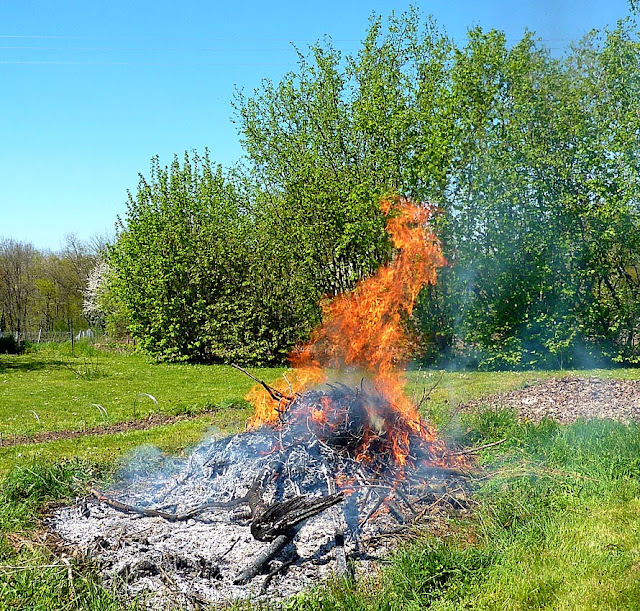 Conditions yesterday were perfect for a feu de jardin. We burned up three piles of clippings and trimmings.
Callie, like her guardians, is really happy to be able to spend time outside again. We threw the tennis ball some and she chased it, but mostly we worked, at least in the morning. In the afternoon, we finally had the bonfire that we had bee planning for more than 6 months. We burned up three piles of branches, twigs, and leaves. Conditions were perfect, with a light wind blowing mostly from the south. That wind carried the smoke north, where there are no houses close to us, only woods, vineyards, and fields. That way, the smoke didn't bother our neighbors. 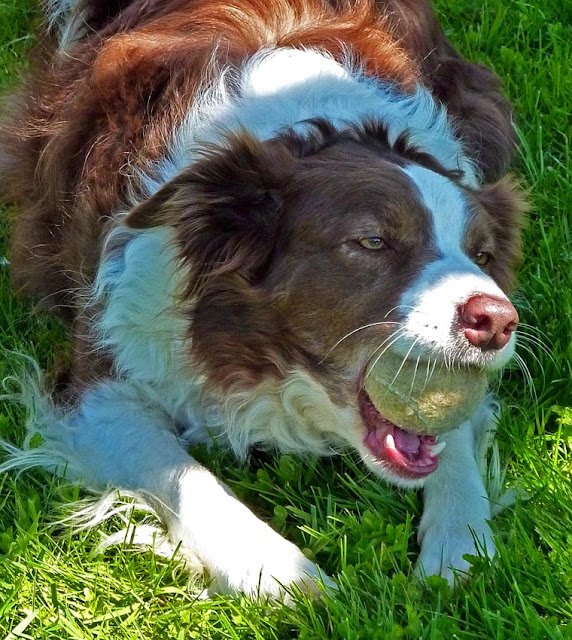 Callie with a mouthful of tennis ball
Speaking of neighbors, we learned from one of them that two others had passed away while I was in North Carolina. The 92-year-old woman across the street died, as did the man who owned the house next to hers, which his family had been cleaning up and remodeling for about a year. The man was in his 60s, I believe, but he had had two bouts of cancer. We saw him last year, and it was obvious that he wasn't doing well. I don't know what will happen to the house now. (By the way, the man next door, who has MS, has never returned home since he had to be hospitalized in March.)

Chard that survived the winter
Out in the garden, Walt planted radishes and lettuces while I worked to disentangle a short row of Swiss chard plants from a mat of weeds that had nearly taken over the plot they grow in. This was chard that we planted last fall for springtime harvest. There had been a row of collard plants next to the chard, but I pulled all that up last week and cooked the greens. The chard will continue growing for a while. It survived the wet winter, but now I want the leaves to get bigger before I start picking and cooking them.
Posted by Ken Broadhurst at 07:45