My home town, Morehead City, is located on the central North Carolina coast about half way from the Virginia and South Carolina borders, 500 miles south of New York. One of the traditional trades here has always been crabbing. People fished crabs out of the oceans, sounds, and estuaries. There were crab houses where the caught crabs were steamed in big vats (the meat is sold already cooked). And there were teams of workers, usually women from the area, who picked the cooked crab meat out of the shells and packed it into plastic tubs for shipment by refrigerated truck north to urban centers like New York and Philadelphia for sale. 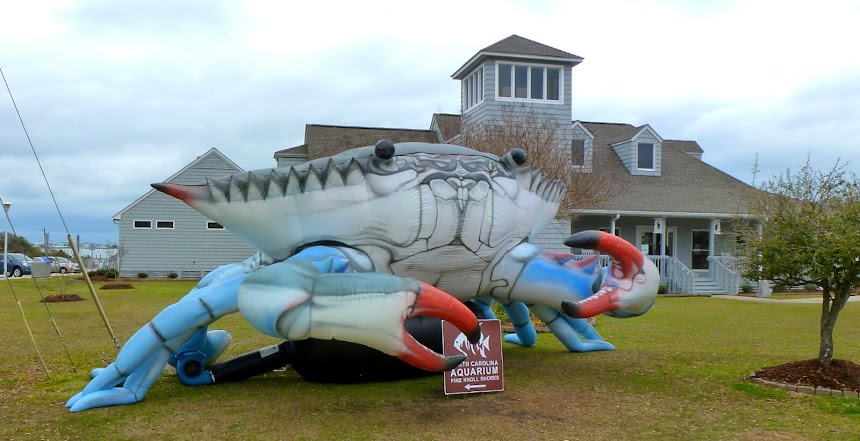 A gigantic inflatable blue crab in front of the local visitors' center, advertising the N.C. aquarium
Most of that industry has now died out. There is still crabbing on a commercial scale, I'm sure, but I don't know who picks and packs the meat. Maybe the work is mechanized now. The little crab houses are all gone. For a while, back in the 1980s and '90s, migrant workers from Mexico and Central America were brought in to do the job because the local people no longer wanted to do it, or wanted to be better paid. The local crab, called the blue crab, is now more of a tourist attraction, I guess.
Posted by Ken Broadhurst at 06:00