In France, the diet is largely based on meat. And in the Loire Valley, the meats of choice are pork and poultry. This is not beef or lamb country. People do raise goats, but more for their milk, to make cheese, than for their meat.
All over France, one of the most typical flavoring ingredients used with poultry, eggs, or vegetables — and even beef, lamb and fish — is diced-up meat in the form of lardons, which are little chunks of smoked or salt-cured pork belly. In the U.S., meanwhile, pork belly is mostly made into bacon ("streaky" bacon, as opposed to Canadian or "back" bacon). 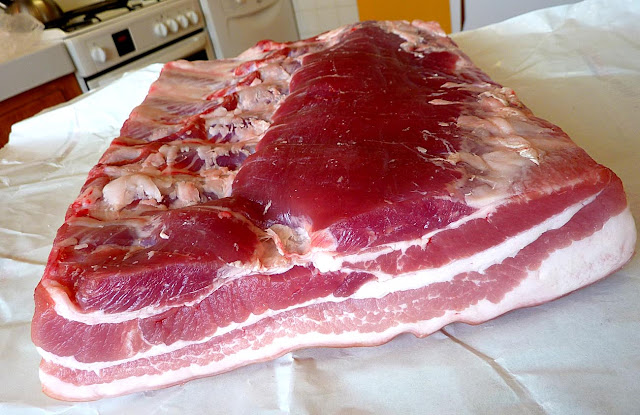 A slab of fresh pork belly, called poitrine de porc in France, weighing about six pounds
Here in France, pork belly is called « poitrine », which means "breast" — a chicken breast is also called a poitrine, and a person's chest (the front of the torso) is his or her poitrine. Linguistically, the word derives from the same root as "pectoral." This part of the animal is called "belly" in English and "breast" in French, but it's the same thing. It's the location of the lower or "back" ribs — the ones closest to the abdomen. It's not the spare ribs, but the meatier ones.
"Streaky" bacon, American-style, is not nearly as common in France as in the U.S. Don't expect bacon and eggs for breakfast, or BLT sandwiches at lunchtime. Thin slices of what is called poitrine fumée are available at the supermarket, and in charcuterie shops you can order poitrine fumée sliced the same way, so people must use it in some dishes and preparations. I know I do. 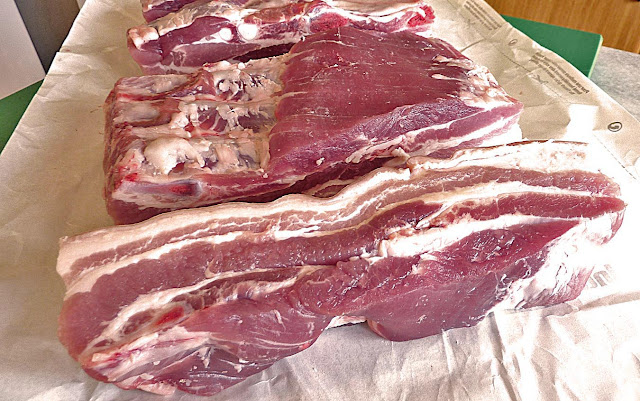 I cut the poitrine into several pieces and put some in the freezer.
I might have to make petit salé with one of them.
Poitrine de porc is more often sold in several other forms. There are lardons, of course, either salt-cured or smoked. There's the cut called petit salé, which is thick-sliced, lean salt-cured pork poitrine that is sold already cooked and is most famously served with lentils. There's brined poitrine (or other cuts of pork) called porc demi-sel, which can be boiled without pre-soaking in potées or stews, with vegetables. Slices of salt-cured or smoked poitrine are often served with choucroute garnie (sauerkraut). 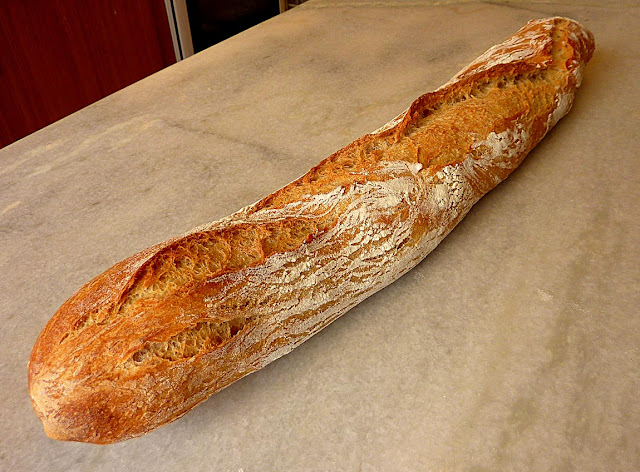 This one of our home-delivery loaves of bread, called a baguette de tradition.
One confusing thing about poitrine de porc is that the same cut of meat is also called lard in French. In other words, lardons are chunks of lard, and lard is not at all the same thing as the rendered pork fat that we call "lard" in English. Our lard comes mostly from the animal's back, I think — from the cut called "fatback" in the American South. In France, actually, you can buy either lard maigre — lean bacon — or lard gras — "fatback" — to cook with. "Meager" or lean lard might seem like a contradiction in terms, but it isn't in French. 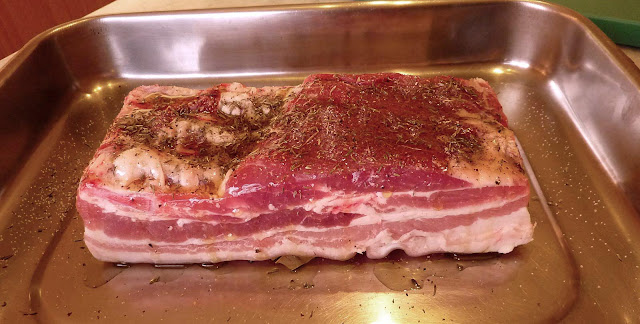 A "roast" of fresh poitrine de porc, ready for the oven
Often, our first thought when it comes to bacon or pork belly is, "Ooh, too fatty." But the fact is that a lot of the fat has been bred out of pigs over the past few decades. There's even a movement to develop hog breeds that will give fattier meat than the pork you find on the market nowadays (there was an article about it in the New York Times this past week). Pork today  — "the other white meat" — sometimes cooks up dry and stringy because it's so lean. 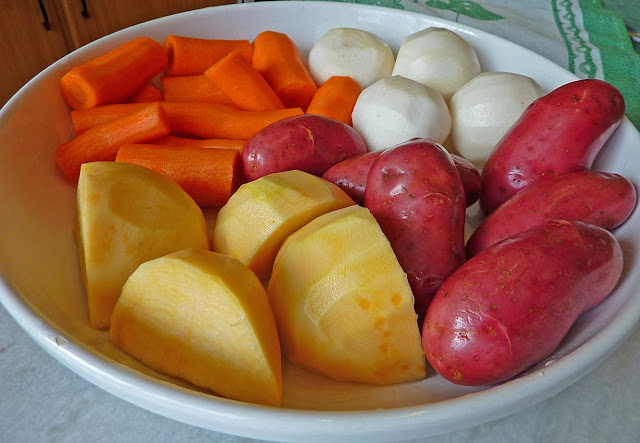 How about some roasted winter vegetables to go with the roasted pork belly?
And that means the fattiest traditional cuts of pork, like poitrine or belly, are lean enough to be enjoyed roasted or braised. That's what this is all about. Not long ago, the butcher counter at the Intermarché supermarket across the river in Noyers-sur-Cher had a special sale on big slabs of poitrine de porc fraîche — fresh pork belly — at 2.50 euros per kilogram, or about one euro a pound. How could I resist that?
Posted by Ken Broadhurst at 08:15