What's really going on here these days? Well, we blog about the weather all the time, because it's been so long since we had really nice days. It is a little depressing. But the weather will probably improve soon.


What's going on with our neighbors is even more depressing, in some ways. First, there has been some controversy over the undergrounding of our electric lines and the installation of a ground-level transformer unit for the hamlet to replace the one that's currently on a pole out by the pond. 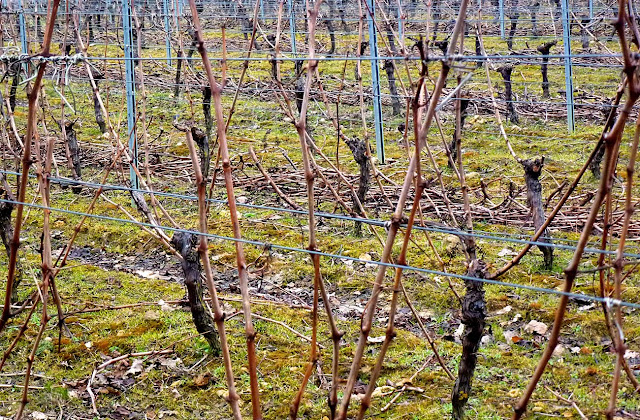 A tangle of vines


When the electric company asked our neighbors — the ones who spend 10 months of the year in Blois and just the two summer months in Saint-Aignan — about locating the transformer unit on their land, they had a fit. (That's how the mayor described it.) They said they didn't see why the transformer unit should be on their property because they don't even really live here. Never mind that the electric radiators in their house across the road stay on all winter long!


Anyway, there's been conflict and we've been kind of caught in the middle. The upshot is that the transformer is going to be located on our property. That's not a big problem, but the whole situation has been a little tense. The neighbors aren't happy, the electric company isn't happy, and... well, enough said, for now. We'll see how it plays out.

The hamlet in the distance


Meanwhile, our other neighbor, the one who suffers from MS (I think that's what he has), is failing now. When we arrived here 10 years ago, he was still able to drive and basically take care of himself. Then for years, we didn't see much of him at all. He lives alone.


He has a lot of help. There are aides ménagères — women who cook and clean for him — there every day. We see their cars, and we have had conversations with some of them. There are also several aides soignantes — nurses or paramedics — who come by every day, and there is one man who drives a big Mercedes and carries a black satchel, leading us to assume he is a doctor, who comes to the neighbor's house five days a week at noon nowadays.


The problem since Christmas is that the neighbor man keeps falling. He wears a device that looks like a wristwatch with a button on it he can press to call for help when he falls or otherwise needs assistance. He has given our phone number to the emergency service that takes his calls. The emergency service has called us half a dozen times now to ask if we can go help the man get back up off the floor. We've done so and don't mind, but it is really not a good situation.


We've had two such calls this week. One evening (my birthday), the call came and Walt and I went over there. The neighbor was sprawled on the cold tile floor in the doorway between his kitchen and living room, basically naked and completely unable to move. All he had on was a thick sweater jacket — no pants or anything else. We were able to pick him up and get him settled in a dining-room chair.


The next day (yesterday), the woman who came in to spend the morning over there called at about 8:30. Walt was out walking Callie. The woman said the neighbor had fallen again and she needed help, if I could come over. I said sure. It turned out the neighbor had fallen a second time soon after we left him the evening before and had spent the whole night sprawled on the dining room floor (cold, hard tile), wearing just that sweater jacket. He was cold and stiff and said he was in pain as the woman and I helped him up and got him settled in a big recliner (a hospital chair of some kind). 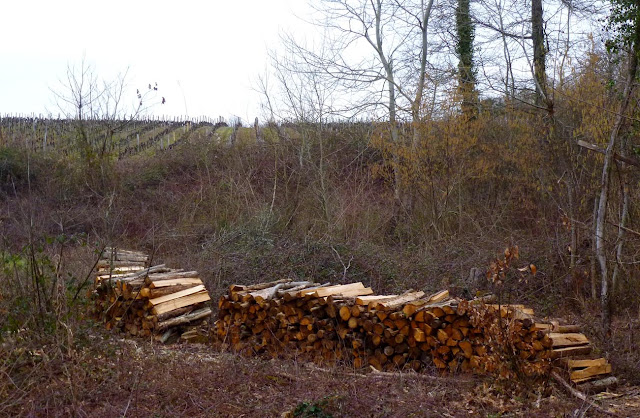 Firewood out in the vineyard — whose it is, I don't know


So it's a bad situation. Walt and I of course have no training, so we are willing but not qualified. He's heavy and it's not easy to get him up off the floor (I don't have the strength I used to have). I don't think the man is going to be able to live there alone much longer, even with all the helpers he has. Twice this winter his fuel oil has run out and he's spent days and nights with no heat, it turns out.


I don't know. Maybe he'll pull through another time, once the weather improves, and he'll be able to stay in his house rather than be re-located to an assisted-living facility of some kind. He'll be 71 years old next month, he told me the other day. He has a couple of daughters who live in Paris and another down in the Avignon area. They come to see him two or three times a year for a few days. I don't know if they are aware of the gravity of their father's situation.


So there. We blog about cooking and photography and walking the dog and the weather, but now you know more about what is going on around the hamlet. I have some food pictures — the birthday duck and beans, etc. — but I'll spare you.
Posted by Ken Broadhurst at 08:17