Treasures from the late 1960s

Our friend Ellen who lives in Paris and frequently comments here has sent me a treasure — a batch of old photos that she found. I met Ellen and her husband because I once wrote here on the blog about my first experience in Paris, back in 1970. I stayed in the hotel where they lived as students back then. I was spending spring semester that year in Aix-en-Provence, and for my two-week spring break I took the train to Paris, alone, and stayed in a hotel in the Latin Quarter.
Most of the other students on the program took off to travel around in places like Greece, Spain, or Scandinavia for spring break, but I didn't have the means or the motivation for travels like that. I had come to France to see France and work on my French. Paris was the only place I could imagine wanting to spend those two weeks. I went to the Louvre and to Versailles (in a snowstorm). I took the metro and went to see the old central marketplace called Les Halles, which no longer exists.
I don't at all remember how I found the Hôtel Pierwige. I just stumbled into it, I think, after I got off the train that day in late March and started wandering the streets. The price must have been right. Our group had arrived in France on a charter flight from New York three months earlier, on one of the last days of December 1969, and we had spent a night in the Hôtel Monge on the rue Monge in Paris before flying on down to the Aix-Marseille area. I guess that's why I ended up at Le Pierwige, which was in the same area, on the boulevard Saint-Germain, just off the place Maubert. I didn't know any other Paris neighborhoods at all at that point. 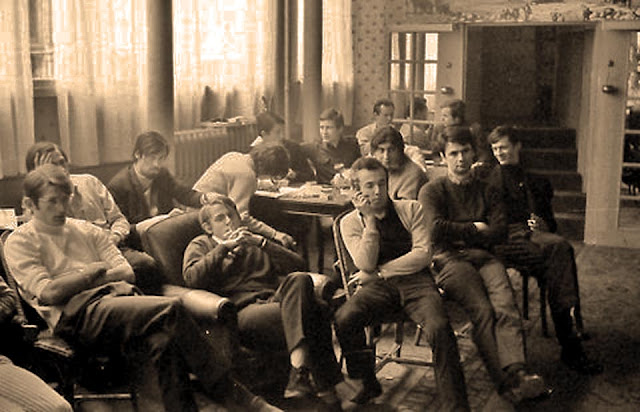 Students who lived at the Pierwige Hotel watching TV in the lobby in the late 1960s
I didn't meet Ellen back then (43 years ago), but I did meet the woman whose job it was to tend to the front desk of Le Pierwige and generally run the hotel. I called her Madame Suzanne and to my 20-year-old eyes she seemed pretty old and very French. She had unnaturally blonde hair and wore a lot of makeup, it seemed to me, for her age. She was brash, I thought.
The weather outside in Paris that March all those years ago was a little like the weather in Paris right now: cold, snowy, and gray. As I said, I went to Versailles and wandered around in heavily falling snow one day. I took most of my meals at a restaurant on the nearby boulevard Saint-Michel where a four-course dinner with wine and coffee cost about five francs, which was less than a dollar.
Partly because of the lousy weather, I spent a lot of time over those two weeks just sitting in the Pierwige lobby talking to Madame Suzanne, who Ellen says was known to the other occupants of rooms at the hotel as Zaza. I didn't know it at the time, but most of the rooms at the hotel were rented long-term by students. And since it was spring break, many of those students were out of town, off traveling, or visiting their families around France.
I always wondered why there weren't more guests at the Hôtel Pierwige while I was there, and that explained it. Madame Suzanne had plenty of time to spend just talking with me, and she seemed to love to talk. I was in language heaven. I'm sure I mostly just listened.
From my viewpoint in the lobby, I was able to see guests arrive and depart, and observe the everyday workings of the hotel. Every morning, a load of freshly baked baguettes would be delivered for the breakfast service and other meals served at the Hôtel Pierwige. The smell was amazing. One day, however, Madame Suzanne tasted a piece of baguette and made a face. The bread was too salty! At that point in my life, it had never occurred to me that a French baguette could be anything other than delicious  — and I'm not sure I even knew that bread could have salt in it, much less too much salt!
It's funny the things you remember. Seeing these pictures, even though I'm certainly not in any of them because they were taken a year or two before I arrived at Le Pierwige as a very temporary guest, brings a lot of memories rushing back. I stayed in the hotel three times that spring, including a weekend in May and a few days in June as I was on my way back to the U.S. after the semester ended. It wasn't many years later that Le Pierwige closed down. The building is still there, but it's been occupied by a bank for many decades now.
Here's a link to a post I did about Le Pierwige a couple of years ago. And here's one from 2010.
Posted by Ken Broadhurst at 08:13