Here are three more photos to finish off yesterday's post about roasting a piece of fresh poitrine de porc, or pork belly. "Side meat" is another term we might use to describe it. It's basically fresh bacon. 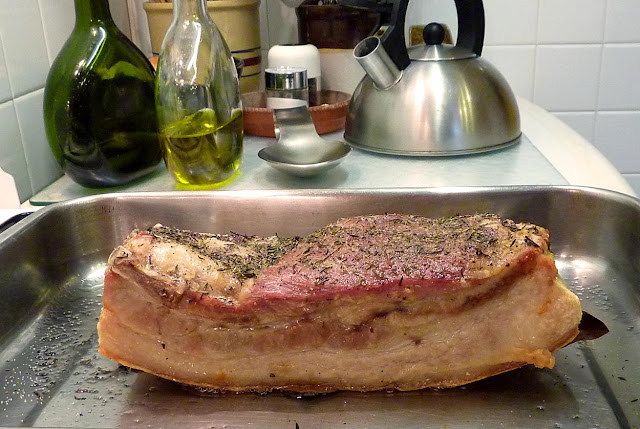 I started roasting the chunk of side meat at a fairly high temperature — say 425ºF / 220ºC — so that it would develop a crust and brown a little bit. The picture above shows it, seasoned with salt, pepper, thyme, and bay leaves (these last underneath the roast, so they wouldn't burn), after it had cooked for about 30 minutes.

I gradually lowered the temperature over the next two hours, keeping an eye on the roast to make sure it wasn't burning. When it was about an hour before lunchtime, I added the vegetables (carrots, rutabaga, turnips, and potatoes), along with a few unpeeled garlic cloves, to the roasting pan and covered it with foil. 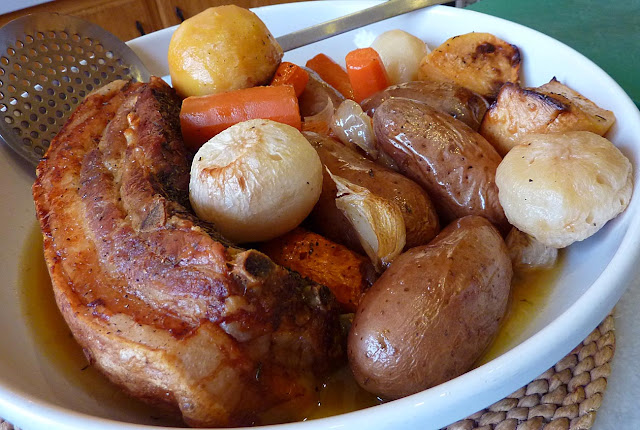 In all, the roast cooked for nearly four hours. The vegetables took longer than I thought they would to cook, but the long cooking time made the meat very tender. I probably should have blanched the vegetables before putting them into the oven. No complaints, though. It's almost embarrassing to think how much of the meat and vegetables we ate at one sitting. There were some leftovers (diced up, they went into the turkey osso buco sauce) but not many.

Now I'm off to make a brine in which to cure another piece of side meat, which will become petit salé by the end of the week. I have a pound of lentils in the cellar.
Posted by Ken Broadhurst at 08:00