I don't know who owns this Citroën 2CV, but it certainly is a fine-looking car. It was parked down by the church in our village last week, and I've seen it out and about a few times recently. 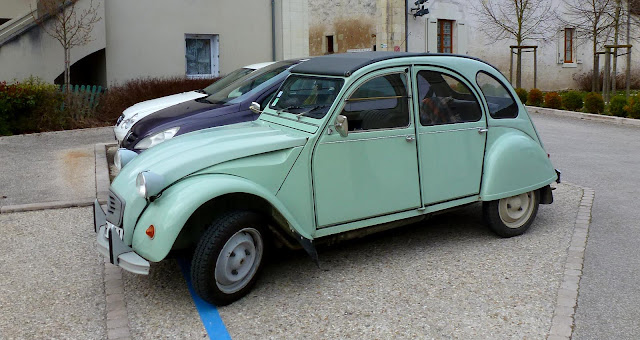 The 2CV was manufactured from 1948 until 1990, so all the ones you see on the roads
are at least 20 years old. Just over five million of them were built.
It's called a 2CV (Deux Chevaux) or "two horsepower" car because of the size of its engine. The CV number in this case isn't real horsepower, but instead is "fiscal horsepower," a formula based on engine size, power, and emissions levels that is used to calculate car registration fees. My little Peugeot, for example has a 5CV engine for tax purposes, but its diesel engine produces 90 hp in real terms.
Posted by Ken Broadhurst at 08:00