A visitor from Berlin

A friend who lives in Berlin is visiting. He's a Californian who has come to see us in Saint-Aignan several times in the past, but in the distant past already: his last visit was in 2007. He's been working and living in Berlin for a year now. His name is Luke, and he arrived here via Lake Como in Italy and Dijon in Burgundy.


Luke found out that there was a direct train from Dijon to Saint-Aignan. That was news to me. The trip took just over four hours yesterday morning. I knew you could get a direct train from Saint-Aignan to Tours, of course — it being our nearest city — and even to Lyon, meaning no train changes even if it's basically a "slow boat" that makes many stops along the way.


In Saint-Aignan, the bridge across the Cher river is closed. I forgot about the closure yesterday morning when I left the house to pick Luke up at the train station over in Noyers. I drove down to Saint-Aignan, saw the barricade, and realized I had to drive a long detour down to the next bridge to get to the other side of the river. I was at least 15 minutes late picking Luke up, but he was there waiting, wondering what had happened to his ride.


Yesterday we took a little driving tour around the area east of Saint-Aignan — Romorantin, Valençay, Villentrois, Châteauvieux, etc. — and we were lucky with the weather. The blue sky was full of puffy white clouds, and we had only a very few rainshowers along the way. Luke said the winter has been very gray in Berlin, so he was glad to see blue sky and pretty cloud formations for a change. I forgot to take my camera with me. 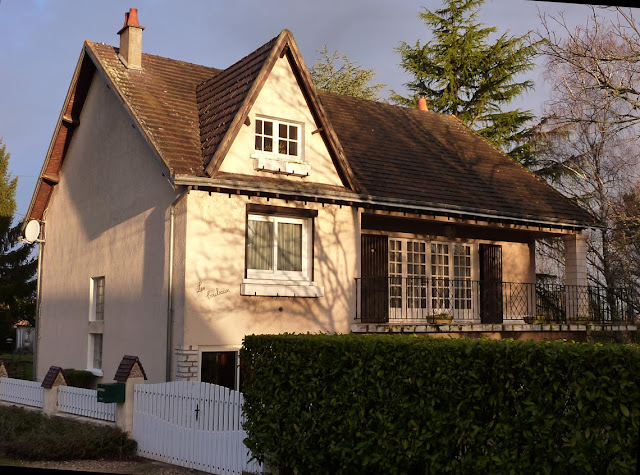 Rare morning sunshine a few days ago. We can't wait
to get the furniture back out on the front porch for the season.


I think today we might go west over toward Montrichard and even Amboise to have a look around. Getting out of the house two days in a row will do me good, and we'll see if Walt wants to come along for the ride. I'll try to remember to take my camera. Right now the sun is out — that's a promising sign, even though the weather report on TV right now says to expect giboulées (brief showers).
Posted by Ken Broadhurst at 08:00