Curry de joues de porc avec oignons et carottes. That's what I call it. "Curried pork cheeks with onions and carrots." I made the curry sauce using coconut milk, but cream or half and half would work too. And instead of Indian curry powder, I used préparation pour colombo traditionnel (as per the label). That's a Caribbean version of curry powder. 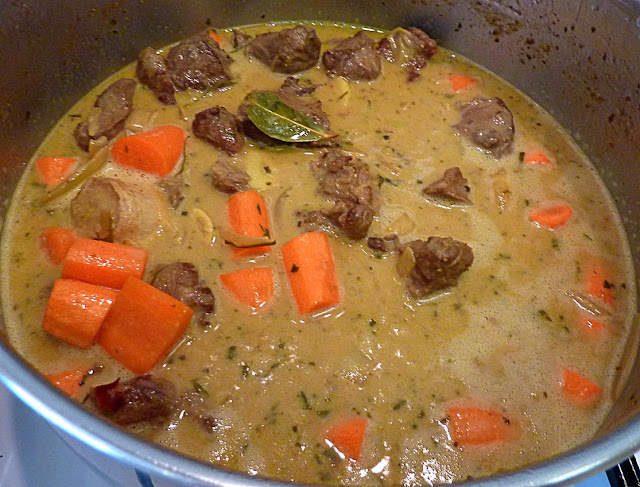 I went to Martinique and Guadeloupe many years ago. Once there, I was surprised to see how many Indians, as in people from India, lived on the islands. And from Sri Lanka, I assume. French Wikipedia says that between 10 and 15 per cent of the people there are of indo-caribéen descent — part of the great Indian diaspora. 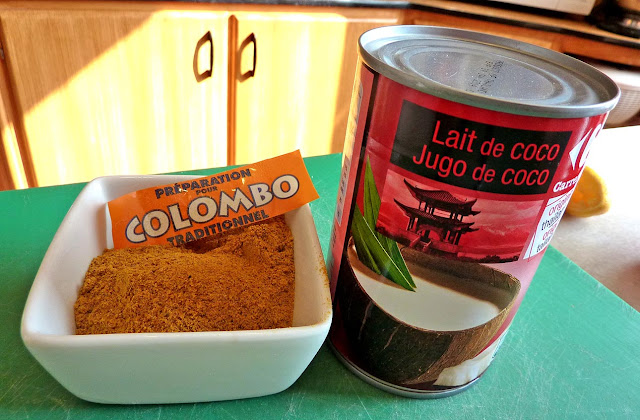 Colombo powder from the Antilles and coconut milk/cream from Thailand

Curried dishes, called colombos, were widely available, especially, it seemed to me, on Guadeloupe. Colombo is the main city of Sri Lanka, the island country that used to be called Ceylon, and that's where the name came from — it must be. So this is curry with a French connection. The spices used in the blend are paprika, cumin, coriander, nutmeg, ginger, cardamom, star anis, cloves, mustard seeds, and saffron.

We're still buying meats from the drive-up butcher, who comes to our house on Tuesdays, and we're always looking for something different and unusual to try. A few weeks ago, we bought a kilogram of beef cheeks and made a bœuf bourguignon with them: red wine, smoked pork lardons, onions, carrots, and mushrooms. The beef cheeks were tender and tasty. 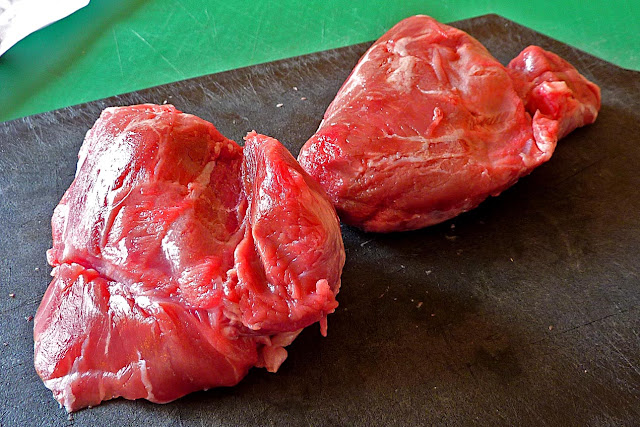 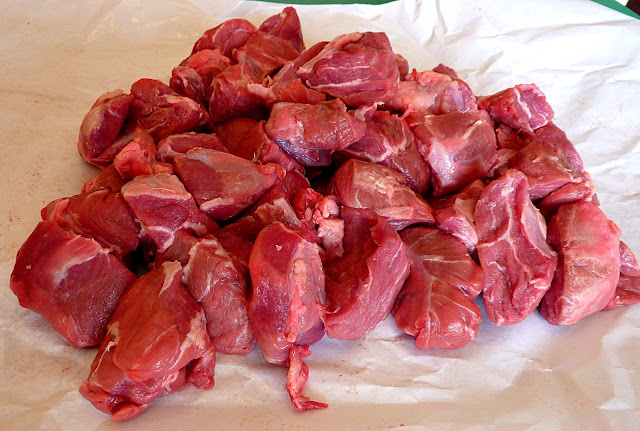 Then Walt noticed that the butcher also sold pork cheeks, so we decided to try those. Here's a whole web site devoted to recipes for cooking joues de porc. I got a kilogram of them — there must have been a dozen or so pieces — from him on Tuesday, and we made the curry. I cut all the cheeks into more or less one-inch cubes and browned them in batches in vegetable oil. 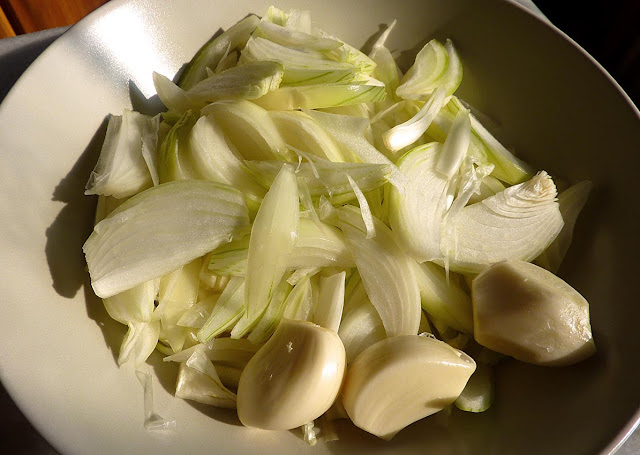 Then I cut up half a dozen small onions and three big garlic cloves and cooked them in the pot I had browned the meat in. I added four big tablespoonfuls of the colombo powder, plus a pinch or two of the really hot crushed red pepper we're using right now (I crushed some Mexican dried chilli peppers using a mortar and pestle) an stirred it well to slightly toast the spices. Then I put the carrots and meat into the pot and poured in a medium-size can of coconut milk. 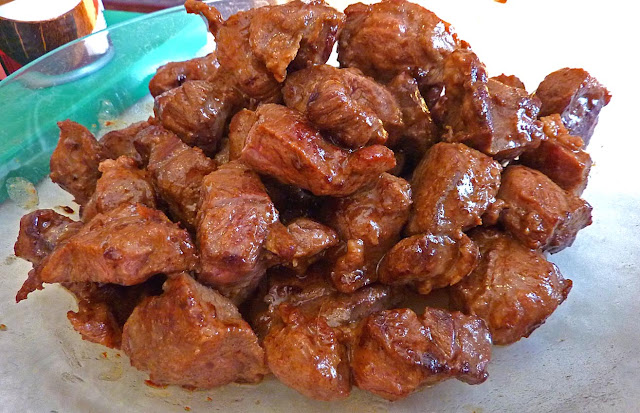 The meat browned and ready to go into the curry sauce

Thin the sauce to the consistency you want, add salt and black pepper to taste, and then just let the pot simmer for an hour or even 90 minutes. Oh, I also tossed in a handful of raisins, which plumped up in the cooking liquid and, with the carrots, added a note of sweetness to the finished product. We ate it with jasmine rice. Oh, and I almost forgot the knob of fresh ginger, the bay leaves, the chopped basil, and the kaffir lime leaves I added for flavor, too. All are optional. Lime juice would be good in the curry sauce if you don't have kaffir lime leaves... 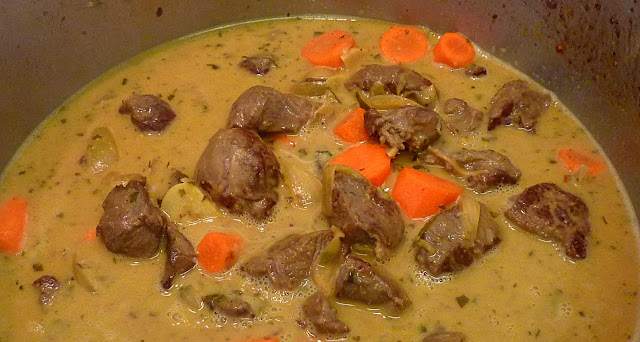 I think I want to make this with turkey "oysters" soon.

The pork cheeks were as tender and succulent as the beef cheeks had been in the beef burgundy. The kilogram (2.2 lbs.) of pork cheeks cost me about 16 euros. They were worth the price, I thought. Next time I want to do this kind of curry, I think I might buy a kilo of sot-l'y-laisse de dinde. The sot-l'y-laisse (meaning "the fool leaves it there") is that tender little nugget of meat just under the thigh on the back section of a turkey or chicken. Sometimes we call it the "oyster."
Posted by Ken Broadhurst at 07:30