Our house is what is called « un pavillon sur sous-sol » here in the Saint-Aignan area (and maybe all over France) — sort of a bungalow over a basement. "Basement" and especially the French term « sous-sol »  ("below-ground") is kind of a misnomer, since none of our house is below ground level at all.


At any rate, that means that our "basement" (entryway, pantry, utility room, and garage) sits on a concrete slab on the ground and the main living level is on what we would call the second story in American terms. In French, it's an elevated first floor — un rez-de-chaussée surélevé. All of that means that we sit up high and with our big windows, we overlook most of the hamlet — the neighborhood. 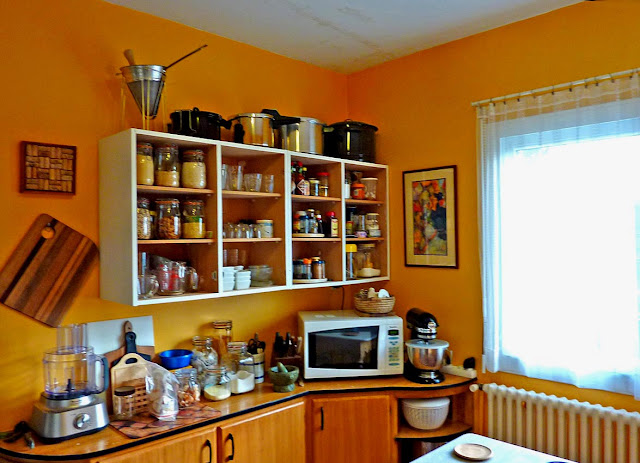 The side of the kitchen with the leak, all put back together yesterday.


In fact, now that we have had the attic space finished and furnished, we have an even loftier (ha ha) view of the area. We keep an eye on the comings and goings of our neighbors, the vineyard crews, the occasional pedestrian, the dogs and cats, the deer, and any other traffic passing by. (A tractor pulling a trailer full of gravel and a sort of road-grader vehicle just went by — they must be resurfacing part of the gravel road through the vineyard.)


I mentioned the leak in the kitchen ceiling yesterday. Well, it rained steadily for an hour or two overnight and we had no repeat of the phenomenon. It seems that the roof leaks only when an extraordinarily large amount of rain falls over an unusually short period of time. That's good, because we don't urgently need a repair — we need a long-term fix. (I'm used to this — three of the places we lived in in San Francisco had roof leaks at one time or another.) 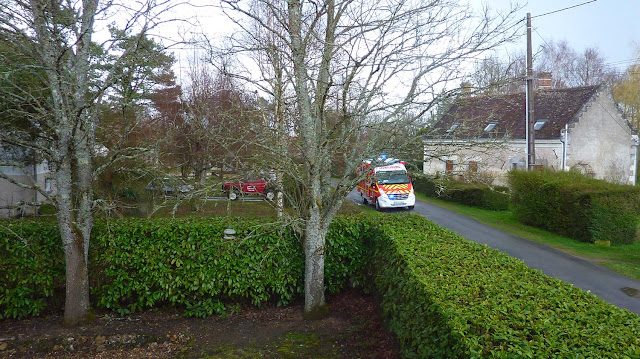 What we noticed out the kitchen window yesterday morning

Yesterday, as I was taking the picture of the kitchen, through the window I noticed a red jeep pull up at the neighbor's house. It was the departmental (county) emergency services. Two uniformed agents (employees of the fire department, I think) got out and went into the neighbor's house — I'm talking about the shut-in neighbor who fell twice last week and who we assisted.


A couple of minutes later, an ambulance arrived. Both the emergency vehicles had blue lights flashing. I don't think they were responding to any drastic emergency, but they came to carry the neighbor out of his house and take him, I assume, to a hospital or convalescence home where his condition can be re-assessed. 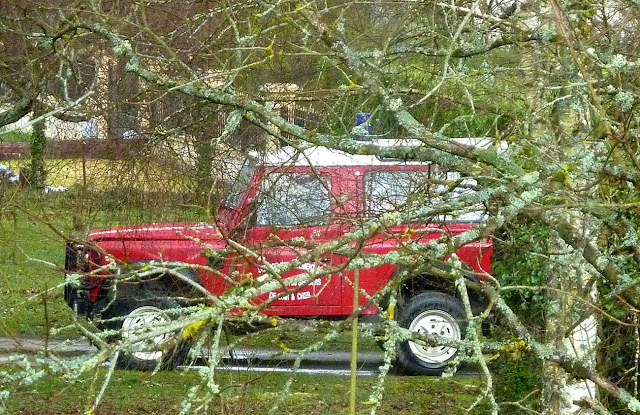 
When the emergency crews brought the man out of the house, he was in a wheelchair. His house is built in the same style as ours, so they had to carry him down the front steps. Then they could roll him down the driveway and lift him into the ambulance. I watched from the kitchen window, discreetly, and I saw that the neighbor was conscious — he was talking and looking around. It was raining out, or had just quit raining. 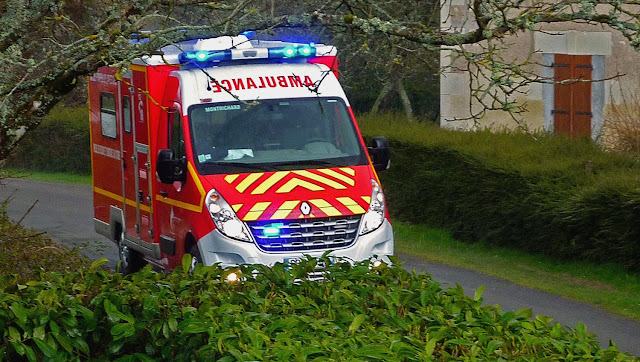 ...and then this ambulance pulled up.


So that's the latest installment. I don't know exactly what's going on, and I don't want to be seen as a busybody. I predict that the neighbor will return to his house at some point, but I don't really know that. I'm just glad that his medical needs seem to be getting the attention of the authorities.

Now there are six empty houses in the hamlet, and just three houses that are lived-in. It's getting lonely here.
Posted by Ken Broadhurst at 08:47