Chowder of cod, corn, and celery

At SuperU the other day, I bought a big piece of cod, called cabillaud [kah-bee-YOH] in French. The woman at the fish counter picked up a whole fish and asked me how much I wanted. I told her about 750 grams. She cut a big chunk of it out of the tail section and weighed it: 630 grams. I told her that would do fine. It cost just under five euros.


My idea was to make fish soup with it, so I didn't need fillets or anything else fancy. I had a container of fish fumet or stock in the freezer that was fairly begging to be used up, and I thought it would make good liquid for a soup. I also had celery, potatoes, and onions.

The chunk of cod poached and then skinned.


I think my initial inspiration had to do with clam chowder. Maybe it's because I'll be going to the North Carolina coast next month for a family visit, and clam chowder is one of the things I most enjoy eating there (along with the local fresh shrimp). The question was how best to get the fish into the chowder in fairly big pieces. 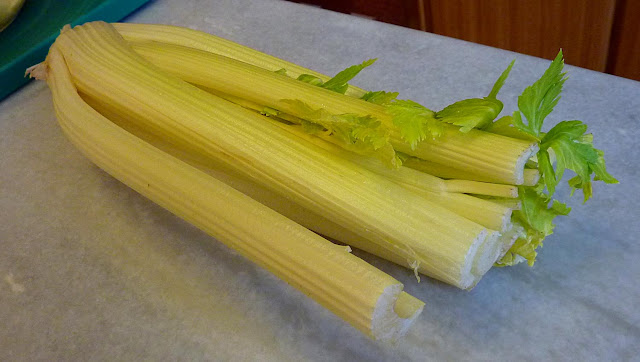 Céleri blanc, as opposed to céleri vert, has been grown in the dark, I think, so it's "blanched."


The fish needed to have its skin removed, and I finally decided that the easiest way to do that would be to poach the whole piece in the fish stock. I needed to add water so that I'd have enough liquid for the fish to float in as it poached. (You could use a light chicken broth if you don't have fish stock.) I just simmered the piece of codfish for maybe 15 minutes until it looked like it was cooked. Its flavor enriched the original fish stock. 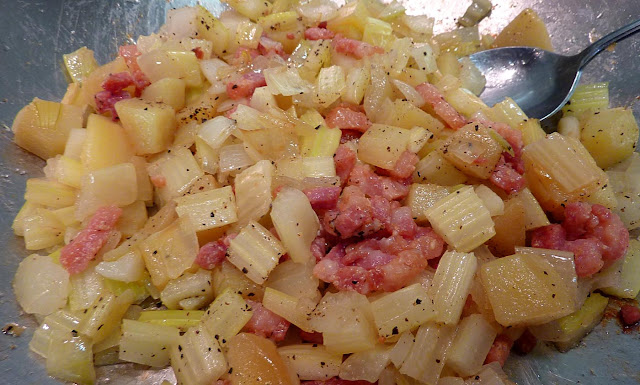 The soup base of "sweated" (lightly cooked) lardons, celery, and onion


I let the piece of fish cool on a rack so that I could skin it before flaking up the flesh. Meanwhile, I had been chopping up a big onion, three long celery ribs, and half a dozen potatoes. I lightly browned some lardons — chunks of smoked bacon — in a pan. Then I "sweated" the onion and celery in the pan with the bacon and the fat it had rendered.

Poached, flaked codfish and diced potato for the soup


At that point, it was just a question of ladling some fish stock into the pan with the bacon and vegetables, to deglaze it. Then I poured that mixture into a big pot with more stock — maybe three quarts in all — and added the diced potatoes along with a pinch of dried thyme. That cooked on low for about 30 minutes, until the potatoes and other vegetables were tender. 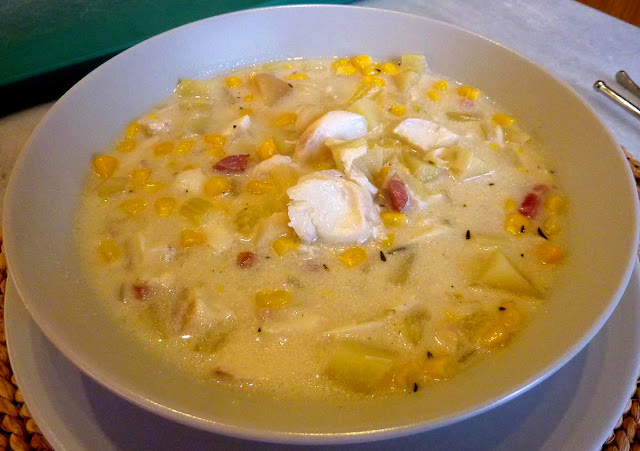 Chowder of cod, corn, celery, potatoes, and lardons, with cream


It was easy to scrape the skin off the poached fish using a spoon. And it was easy to break up the flesh, pulling out all the bones. I left the fish flesh in big flakes. When the potatoes were cooked in the fish stock, I added about a cup of cream to the soup and then I stirred in the flaked fish. At the last minute, we decided to add a little can of corn to the soup for flavor and color. The chowder needs a lot of pepper and just the right amount of salt too.
Posted by Ken Broadhurst at 08:30