I don't know why my Anglo-Irish ancestors — named Willis, Daniels, Gaskins, Miller, etc. — crossed the Atlantic, but most of them were already in North America (or even North Carolina) by the time the great potato famine raged in the Old Country. They didn't have to live through that, and we aren't having any potato famine around here either. 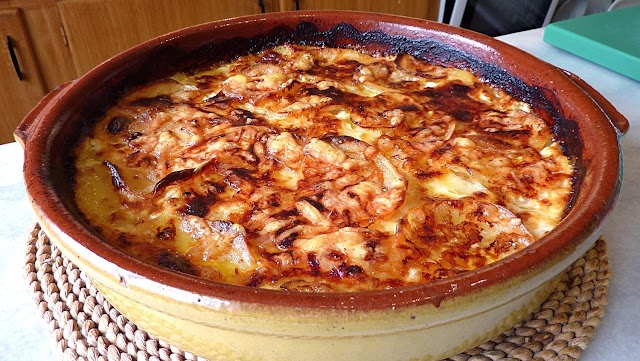 
Not since I bought that 10-kg bag of Caesar potatoes, especially. The Caesar potato was developed 20 years ago in the Netherlands, apparently (though the British might take credit too). Over the past week, we've had mashed potatoes and leek and potato soup, as well as a batch of pommes frites that Walt made while our friend Luke was visiting. The frites were some of the best we've ever made at home, I thought, and were served along some of my "pulled" turkey barbecue, N.C.-style.


Yesterday I made what is called in France « un gratin dauphinois » — scalloped potatoes cooked in milk and cream with garlic, nutmeg, and (optionally) cheese. The Caesar potatoes are not advertised as a good choice for a gratin (a casserole in Am. Eng.) but I can assure you they are delicious cooked that way. Because the potatoes, thinly sliced, don't get stirred during the cooking, they keep their shape and don't turn into puree. The milk and cream get absorbed and evaporate, leaving you with cheesy layers of good potato.


I've blogged about gratin dauphinois before, so I won't repeat the recipe (click here). Some purists would say it shouldn't have any cheese in it. Cheese makes it into a gratin savoyard, they say, the Savoie being the region in the French Alps where a lot of cheeses are made. In the Dauphiné, next door, they don't make what we like to call "Swiss" cheeses. But never mind. Nearly all of the old French recipes, including Monique Maine's and Ginette Mathiot's, add cheese to the gratin dauphinois. Even the Larousse Gastronomique recipe calls for Gruyère cheese.


As the scalloped potato casserole was baking in the oven, releasing all those cheese and garlic smells into the kitchen, I happened to glance out the window. In a plum tree that's now covered in little white blossoms, I saw what looked like an apple on a branch. An apple? But then it moved, and I realized it was a bird. It turned out to be what is called « un bouvreuil pivoine » in French. Years ago, I lived on a street in Rouen (Normandy) called rampe Bouvreuil, and now I know what that street was named after. 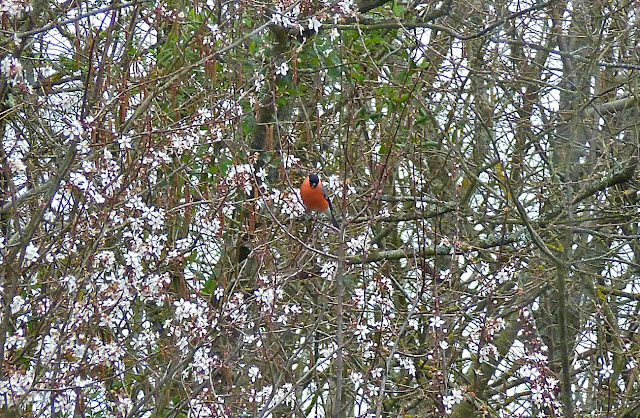 Not a great photo, but at least I documented the appearance of our first bullfinch
Click or tap the picture to see it at a larger size.


At first, I thought it must be a European robin, which is a much smaller than the bird we call a robin in the U.S. The bird I was seeing was more the size of an American robin. I snapped a couple of pictures while Walt got out the bird books. In English, it's what we call a Eurasian bullfinch (Pyrrhula pyrrhula). We don't think we've ever seen one around here before. They're not uncommon in France, it seems, but they are certainly noticeable when you do see one.
Posted by Ken Broadhurst at 07:56