Rouen, Joan, and me

We were in Rouen, one of the two biggest cities in Normandy (not to neglect Caen), on July 22. After lunch with Marie, my English-teacher friend, our mission was to arrive at the Musée des Beaux Arts by 14h00— 2:00 p.m. — to meet with the curator. CHM was taking him a few drawings his grandfather had done about 110 years ago — drawings of scenes from the life of Joan of Arc.

You see, Joan of Arc was burned at the stake in the city of Rouen by the English, after having been turned over to those perfidious Anglo-Saxon enemies by the Burgundians, many centuries ago. In 1431, to be exact, during the Hundred Years War. There is a Joan of Arc church in Rouen, but it is a modern structure. When I lived there in 1972-73, that church had not yet been built. 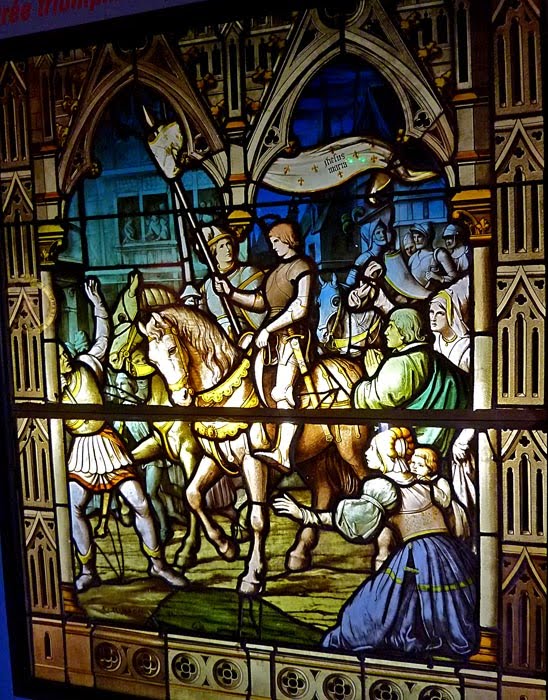 A stained-glass window, on display in the Tour Jeanne d'Arc
in Rouen, shows a scene from Joan of Arc's life.

There is also a Joan of Arc tower — La Tour Jeanne-d'Arc. That has existed for many centuries. It is billed as the tower where Joan was held prisoner for a while, before she was burned alive. I've been up to the top of the tower several times. CHM and I walked up there on July 22, along with the curator of the Beaux Arts museum. The reason: one of CHM's grandfather's paintings is on display there now. His grandfather was a painter named Charles-Henri Michel, and he died in 1905 at the age of 88. 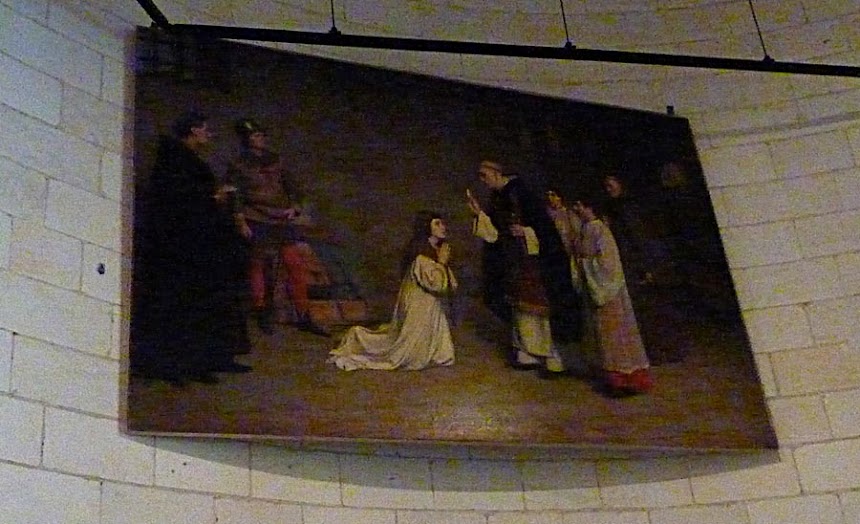 Getting up to the second level of the tower to see the painting meant climbing up at least 100 steps, on an ancient spiral stone staircase with a big heavy rope as the only handrail. But we did it. CHM was quite happy to be able to climb so far, and to be able to see his grandfather's painting again. He had last laid eyes on it more than 50 years ago, he said. 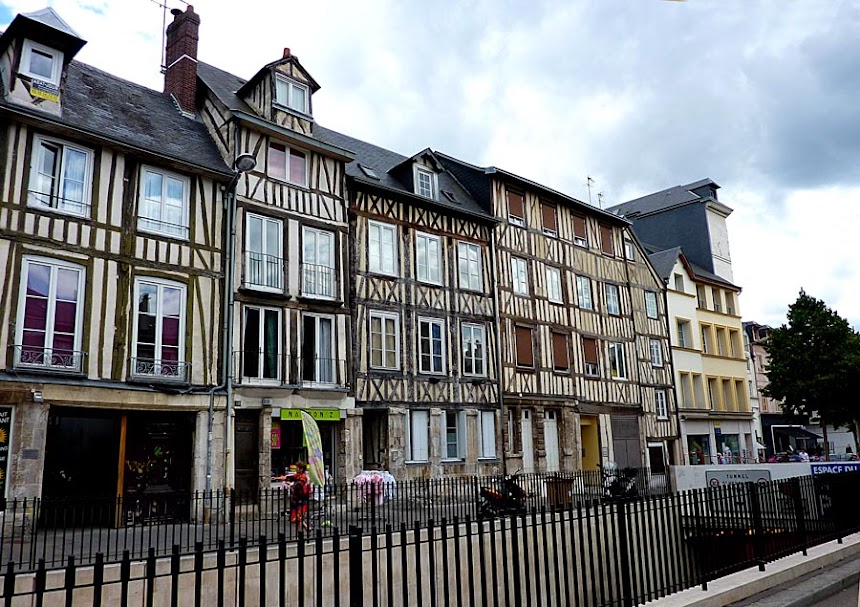 As I've said, Rouen was the setting for my first real initiation into French life and language. True, I had spent six months as a student in Aix-en-Provence a year earlier. In fact, when I arrived in Rouen in September 1972, in my mind I imagined I was returning to Aix. How wrong I was! The climate is entirely different (damp and gray as opposed to dry, windy, and sunny), the food is entirely different (based on cream, butter, and cheese as opposed to olive oil, tomatoes, and garlic), and the language is different too (a Northern French accent as opposed to a Southern French accent, l'accent du Midi). 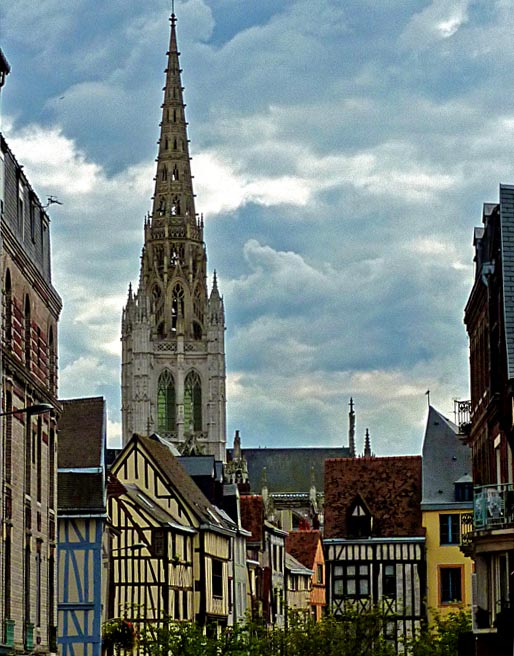 The Eglise Saint-Maclou in Rouen

It was my first authentic experience in France because I wasn't part of a group of American students. I had to find my own housing rather than depend on the director of an American study-abroad program to find me a room or a family. I found a little apartment that didn't have a bathroom! And I had to work for a living, as an English-language teaching assistant in a French lycée (high school). 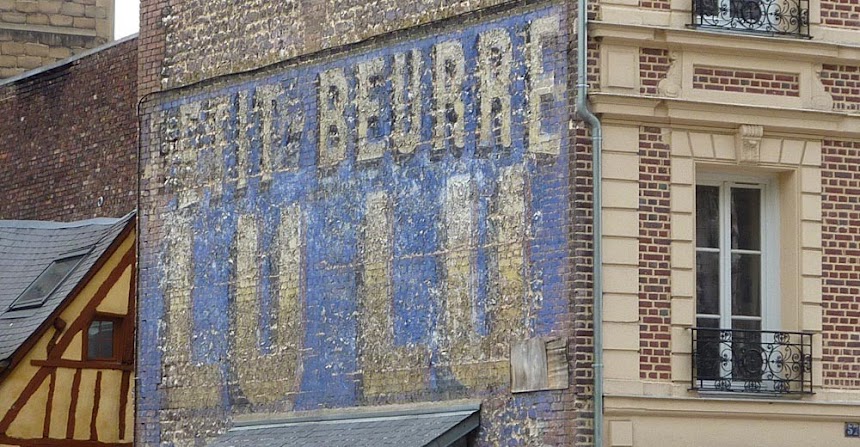 I had to interact with a lot of French people beyond the teachers I had spoken French with in Aix. Those teachers were used to talking to foreign students who were just beginning to learn the language. They made linguistic concessions and accommodations. In Rouen, many of the people I needed to communicate with might never have met more than two or three foreigners in their lives. They didn't realize it was possible to be in France and not know how to speak French. I had to sink or swim. 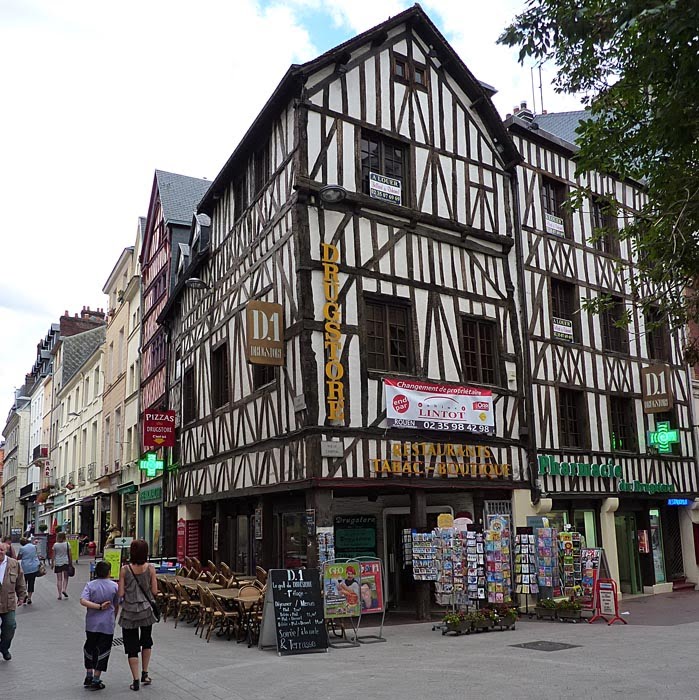 This is a café restaurant called Le Drugstore in Rouen. I remember
going there to eat banana splits and ice cream sundaes
nearly 40 years ago. It hasn't changed.

It was the best of years. It was the worst of years. The so-called teaching position was frustrating. Many of the teachers in the lycée — les professeurs — didn't quite know what to make of a young American, or what to have me do. They didn't think much of my American accent. They preferred British English — that's what they had all learned. Some of them actually made fun of my pronunciation — my English pronunciation, not my French! Some of them told their students not to sign up for my classes because I would contaminate them, linguistically. 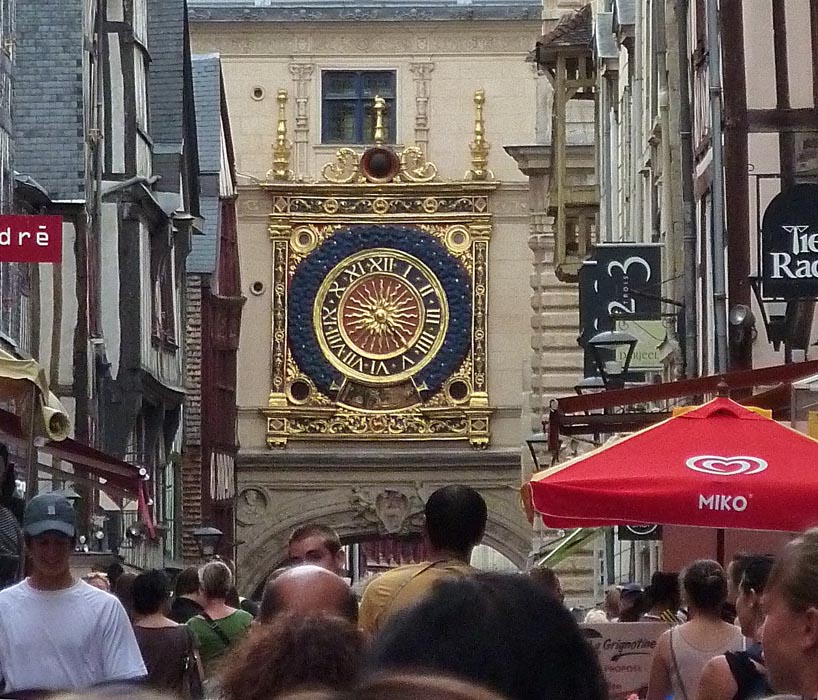 The old clock called Le Gros Horloge
is one of Rouen's major landmarks.

I made good friends in Rouen, in spite of it all. I got to know three families whose sons were students in my classes. Did I mention that the lycée was a very snooty boarding school for boys only? It's co-ed these days, but it was not co-ed back then. One of the families became a kind of family for me, and they were the people who helped me the most with my French. I spent many evenings and weekends at their house and out sightseeing. I made amazing progress that year, both linguistically and culturally.

I probably had a better experience of Rouen than Joan did, overall.
Posted by Ken Broadhurst at 19:42