A walk, and a party

Yesterday morning it was almost cold. Several people at the big anglophone gathering we were invited to over near Montrichard were remarking on it. One French woman, married to an Englishman, said: « C'est la fin de l'été. » Summer's over. And that, I guess, is true despite the nice warm afternoons we're having right now. It's a September kind of warmth — cool around the edges.

When I went out with Callie at 8:00 for our morning walk, I bundled up. In other words, I put on long pants and a long-sleeved shirt. The mornings when you can go out in shorts and a tee-shirt may well be over for another year. There was a heavy dew, and Callie got soaked by running through some tall grass. That's okay; the dog gets a rinse-off nearly every morning and most afternoons, after our walks, anyway. The sand and other dirts that sticks to her legs, chest, and belly washes off and runs down the shower drain. 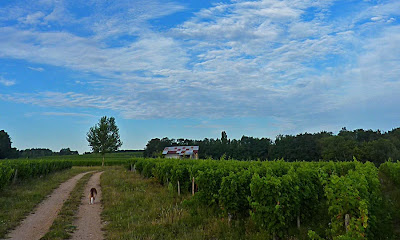 You can see the grape-grower's shed on the side of the dirt road.
Equipment and vine-tending tools are stored in there, I assume.
I've walked by it a thousand times over the past seven years. 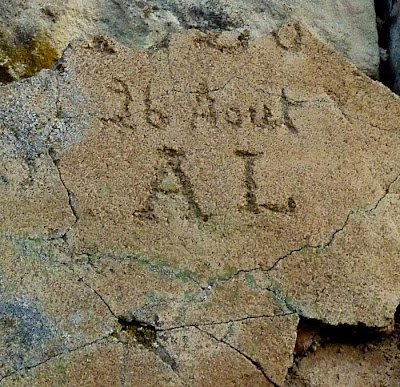 Only yesterday did I notice this grafitti on the wall of the little
stone building. I assume it was put there in August 1920 —
not earlier — and I don't know who A.L. might be.
The worst thing right now is that Callie gets covered in burrs on almost every walk. It's that tall grass she runs through that is full of all kinds of burrs as the summer ends. We have a special dog brush and a comb to pull the burrs out of her fur, and she seems to like the attention she gets while being groomed. She's a collie, but sometimes I call her a burred dog. 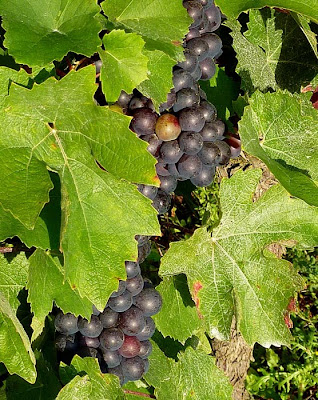 I took a lot of pictures of grapes yesterday. 'Tis the season. On a crisp, cool morning, with a bright sun early in the day, it's hard to resist taking photos of the grapes and vines. Soon the grapes will be picked, and we won't see them like this for another year. 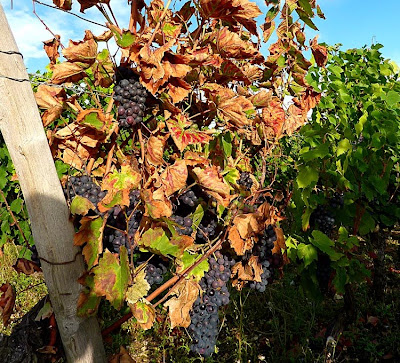 The party we were invited to was an afternoon garden party. There must have been 20 or 30 people there, mostly English. And mostly long-time residents of the area around Montrichard. We had met about half of them previously at one event or another, and some have become friends. Most speak French, and some are anglophones married to French people. 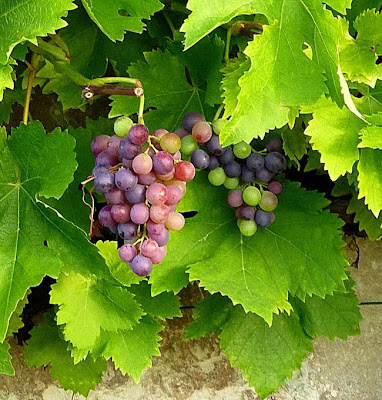 We met one couple, an American doctor and his French wife, who live half the year in Manhattan and half the year in a village about eight miles west of Saint-Aignan. (Talk about a contrast.) There was an Englishman who has lived in a village across the river from Montrichard for 25 years and whose wife died a few years ago. He has stayed in France. And there was an American woman who spends half the year in Key West and the other half in a house here that she and her husband bought some 30 years or so. Her husband passed away a while back. We had met her and enjoyed talking with her once before. 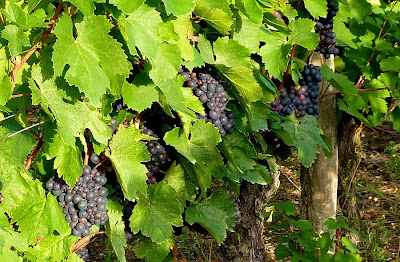 There was another Franco-English couple, in addition to the people I mentioned in the first paragraph. She, English, runs a hot-air-ballooning company based in Montrichard, and he, French, farms wheat on land up near Blois. There were also three Dutch people and a German woman in attendance. The hostess of the party is Irish, and it was her birthday. She and her Dutch husband have owned their house here for 10 years. 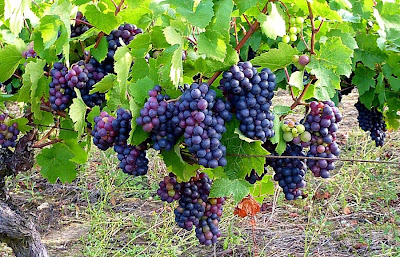 All these people seem to speak both English and French, and many of them have lived here for many years. The Dutch people speak Dutch of course, but also English and French. The German woman speaks German, French, and English. In such situations, people often ask me if I live here year-round. Many of them find the countryside gray and cold in the winter, and would rather be in a city somewhere — in England or in America. Not me — unless, of course, it could be Paris... 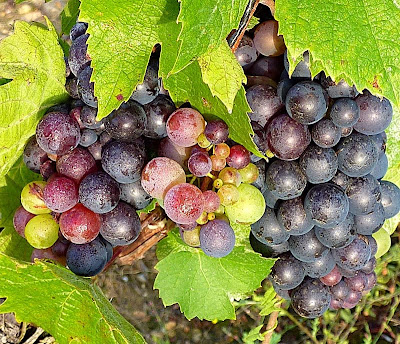 It turns out that there's a whole community of English-speaking expatriates in our area. We were unaware of their existence until about two years ago. Before that, we might have avoided contact with such a group, thinking we didn't want to be part of an English-speaking ghetto. But these expats don't live isolated from the French-speaking society around them. They're part of it, as I think Walt and I are. We have a lot in common, and we enjoyed the party — the food, the wine, the conversation, and the sunshine.
Posted by Ken Broadhurst at 08:44