Through a combination of favorable circumstances and sheer willpower, I managed to avoid making any cherry jam this summer. But now the plums have come in. Blame the neighbors for my latest jam-making spree. Now I'm in a jam.

When M. brought us three kilograms of golden mirabelle plums, what was I to do? You can't just sit down and eat three kilograms of plums, can you? You can put them in the freezer, I guess, but they'll take up a lot of room that you'd rather use for tomatoes and eggplant. Jam is the only logical thing to do with them. 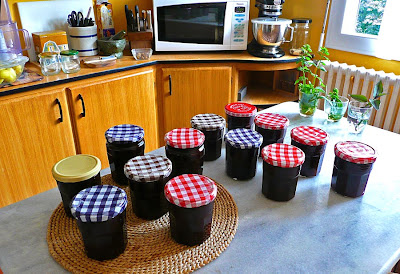 Thirteen Bonne Maman jars full of home-made plum jam,
plus one nearly full one that went directly into the fridge.
Never mind that there are several quarts of plum jam down in the pantry, from a batch that I made in 2007. There it sits. We don't eat much jam, it turns out. My resolution to make a lot of jelly-roll cakes last winter fell flat. Did I mention that I also have six or eight jars of Asian plum sauce, spiced with hot red pepper and ginger root, both down in the cellar and in the refrigerator? We can't seem to eat that up either. 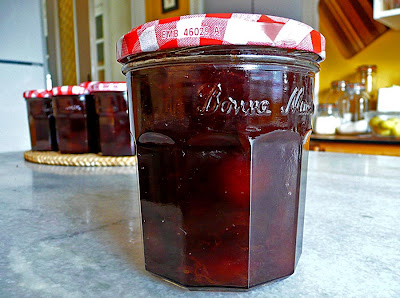 Here is jam for the taking...
The neighbor's mirabelles, combined with about a kilo of our own reine-claude plums, made beautiful jam. It's thick and red, with big chunks of fruit in it. I'd certainly eat some this morning, except for the fact that we have completely run out of bread. The bread lady doesn't come by until after 10:00, and that'll be too late. We have errands to run. 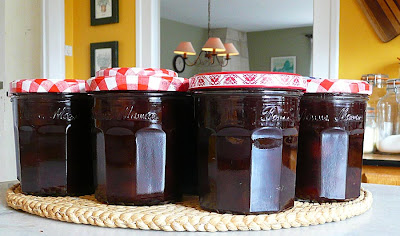 I'm going to have to build a set of shelves
in the pantry, devoted just to jam.
There were fourteen jars of the new jam. I already gave one away — no, not to a passer-by, but to an old friend who stopped by yesterday afternoon. I'm not sure she wanted it. She mumbled something about making plum jam herself, because her trees are full too. But she took it. That's what counts. 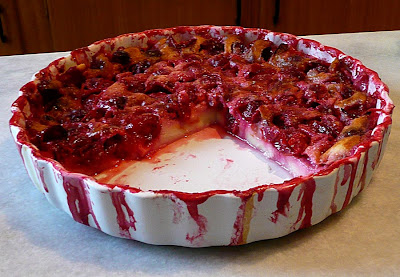 Here's another plum idea: a clafoutis made with little red plums
given to us by other neighbors. It is delicious,
and you don't even have to pit the plums.
Who's next? Stop by when you can and get yours.
Posted by Ken Broadhurst at 07:19