Painting work — and I do mean work — is proceeding apace upstairs, but it is awfully slow going. Two bays of the three-bay space are at least partially primed for painting. One of the two bays will surely need another coat of primer. The third will need two coats too. Yesterday I also worked on the interior of the dormer window.

But we are running out of primer, so we have to go buy some more. That's going to mean a trip to Tours, and that'll take all day — today, I guess. We have at least four stores to visit over there: Paris Store for Asian foods; Leroy-Merlin to check out paint prices and availabilities; Bricodépôt for more primer; and, finally, a supermarket (maybe ATAC, maybe Auchan).

It is supposed to rain today. It's been a while since we had much moisture, and the ground needs it. I pulled up several potato plants yesterday. I'm not sure whether I should be watering the ones still in the ground, and I haven't watered them in a while. Inertia. I don't know if watering would make the potatoes grow bigger, or if it would make them sprout and rot underground. I hope it rains on them. Then it will be out of my hands. The potatoes we are getting are still very good. They come in all sizes. 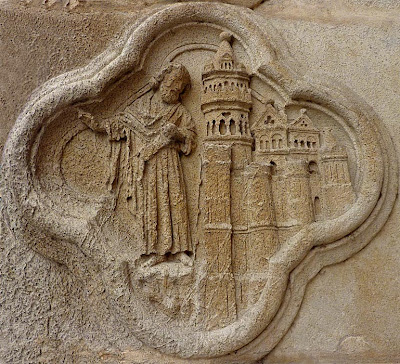 All photos here taken at Amiens cathedral
It's been a while since I talked about Bertie the Black Cat. He's doing fine, overall. His health and energy seem just right. He's eating regularly and using his litter box. He comes in toward nightfall and spends the night on his bed in the garage.

However, he has, according to our one neighbor who is favorably disposed to having cats out and about in the hamlet, been terrorizing the other cats around here. And of course, those cats belong to that very neighbor (CJ, I'll call her). She stopped by one day last week. She had Bertie's collar in her hand.

The collar was broken. Walt had put it on Bertie a week or two earlier, and he seemed fine with it. But then one day he came home collarless. We didn't think too much about it, except to be thankful he had been able to slip his head out of the collar when it, we thought, must have got hung up on a fence or a tree branch. 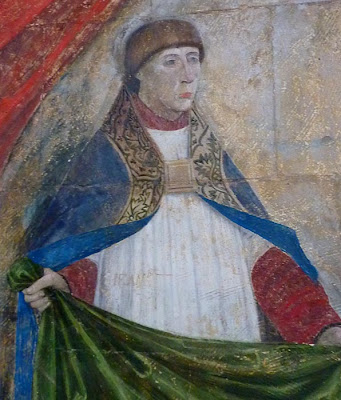 We didn't know what to say. All these hamlet cats are spayed and neutered (coupés, as they say). CJ asked us what we were going to do about Bertie's marauding. I told her I wasn't sure what I could do. He is such a gentle and affectionate cat with people that I was nonplussed by what CJ was telling me. She wanted to know if Bertie had been vaccinated. He has. 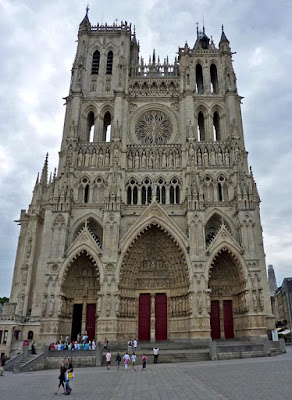 The west front
When I told J., the woman we bought our house from, about all this, she had only one thing to say: « Très bien. Peut-être maintenant vous serez moins embêtés par les chats de CJ ! » — "Good. Now maybe CJ's cats will be less of a nuisance!" There's no shortage of catty behavior and attitude at La Renaudière, I guess.

A couple of days later I talked to our neighbor the mayor of the village, A. I told her about the cat incidents. She didn't seem worried. She said CJ's white cat (her daughter's, as I said), is a terror. The cat wanders into A.'s house when the door or window is open, and then attacks her when she tries to get it to go back outside.

Bertie, par contre, is a charmer, A. said. « Le chat noir est très gentil » was her take on it. He comes to see us, she said, and we pet him and play with him. As I said, Bertie loves people. But evidently he doesn't like other cats. Or, I think, maybe those other cats, who think they own the neighborhood, are trying to force him out or keep him in his place. And he's not putting up with it. 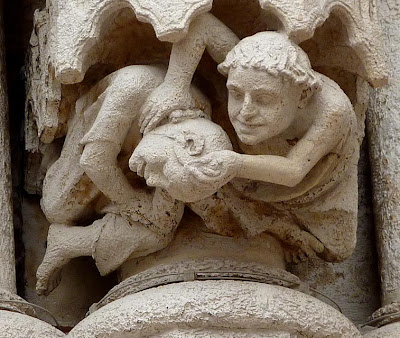 A. has other cats to whip — d'autres chats à fouetter — as they say in French. A neighbor about a kilometer down the road from us has been obliged to move out of her house for health (maybe mental health, I gathered) reasons. She now living in some kind of retirement or nursing home. Problem is, she left behind 15 or 20 cats, which are now obliged to fend for themselves. The empty house is for sale, but the odor inside means the whole place must be completely redone. It may not be salvageable, A. said.

Meanwhile, the abandoned cats are foraging chez les voisins, in their garbage cans, and even in their kitchens, since the weather is warm and doors and windows are often left open. No window screens or screen doors here, as I've probably said, because flies and mosquitoes are few and far between. A. has to do something about the poor cats. She has to go through legal procedures to have them declared abandoned before the SPA (Société pour la Protection des Animaux) will get involved. 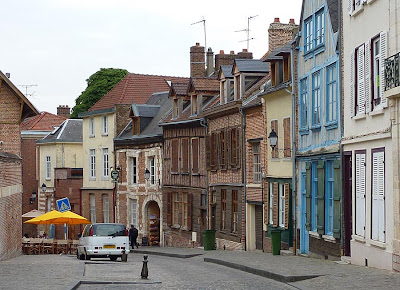 The neighborhood around the cathedral in Amiens
Optimist that I am, I think the cat fights at La Renaudière (there was one in our yard, in the middle of the night, about a month ago) will stop once dominance and territory disputes are settled. All our cats are well fed and housed. However, there was another cat spat Monday morning. It was about 10:00 a.m. We heard the wailing and growling, and Walt ran out to see what was happening.

Bertie was fighting with the white cat. CJ was out there too. The white cat took off, jumping over a fence into another neighbor's yard. Bertie came to Walt when he called him and let himself be picked up and held. CJ was laughing, Walt said, so it could have been worse. We kept Bertie in for about an hour, but then decided to let him back out. He's not an indoor cat, and he needs to roam and hunt.

More later about how Bertie and Callie are getting along...
Posted by Ken Broadhurst at 07:48