I've always said that one of the main reasons I started this blog was to publish the pictures I love to take with my digital cameras. Over the past seven years, I've been through at least four cameras, in fact — two Canons and two Panasonics. And now I've reached a point where I've used 90% of the space Blogger allocates to each blog for photo storage.

I looked at Blogger help and learned that I can pay an annual fee — otherwise, Blogger is a free service — of $5.00 U.S. to get 20 GB of photo storage. When you consider that $5.00 is a little less than 4 €, it would be silly not to sign up. It's either that or stop the blog. Some days I think I am ready to stop blogging, but then what would I do when I get up early in the morning. Every day, I mean. 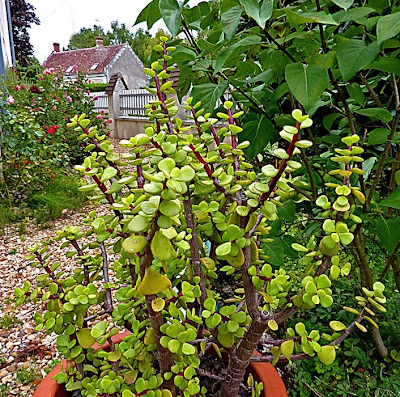 Looking through the desert jade plant (thanks, CHM)
toward the neighbors' house
My other motivation for blogging has been to describe what life is like for a couple of Americans in France — not in Paris, mind you, and not in what they call La France Profonde, way out in remote country, but just middle-of-the-road small-town France. And not a life of leisure, but a working retirement. At first, that seemed easy. There was a wealth of material. Now that I've been here for more than seven years, it seems harder and harder to keep putting our life and daily activities on the blog as some kind of an example. 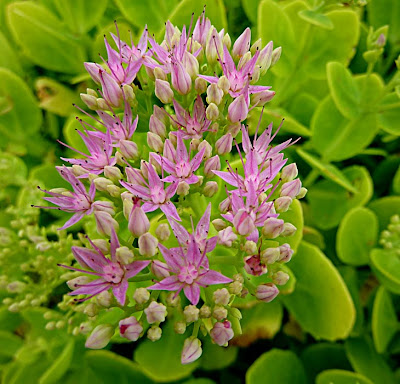 A sedum flower
It's not that it has gotten old; it's just that it has become routine. I've sort of forgotten, on a gut level, what life is like in the U.S., so it's hard to pick themes and events that make life so different here. Or maybe it's just not that different. Years ago I wrote something about life in France and life in America are the same puzzle, but all the pieces are different. Now I wonder. Are they? I don't plan to move back to the U.S. to find out. Sometimes I think I hardly recognize the U.S. any more. 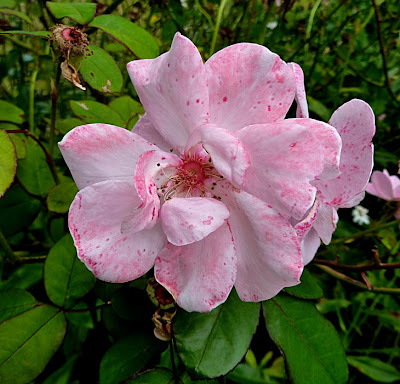 A rose
In a lot of ways, this has been the summer of our discontent. Having major work done on the house has been a major disruption. Everything is shifted around, and disorderly. Things are piled up in the garage and utility room. There's furniture down there that will eventually get moved back upstairs and find its rightful place again. I hope. There is a jumble of painting supplies. I guess we'll organize all that or toss it out, when the time comes. 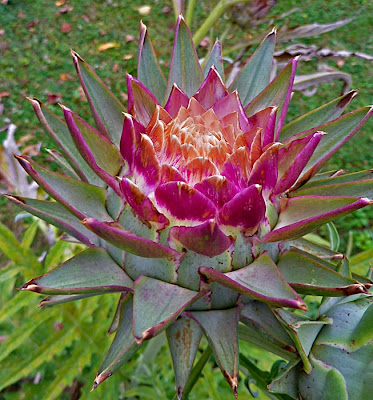 An artichoke
Instead of getting the garage cleaned out, it's now piled up worse than it was when we first moved into the house in 2003. That summer, we hauled carloads of junk to the déchetterie, the recycling center across the river in Noyers. This summer, instead of cleaning out, we seem to have been accumulating. I think the disorderliness is getting me down. 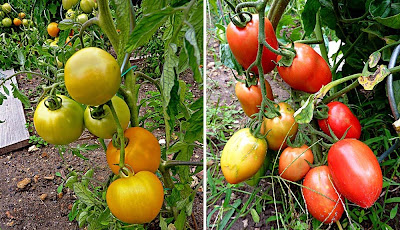 Here come the tomatoes
If the garden has produced anything, it's basically through its own resources. We don't deserve much credit. Luckily, the weather has cooperated, and we haven't had to do a lot of work weeding and watering. There's been enough rain, but not too much. It's been warm enough, but not too hot And thank goodness for the potatoes and zucchini — they've kept us motivated by producing early and abundantly. They've given us the patience to wait for the tomates and aubergines to start coming in.

The painting and furniture-moving will soon be done. Then we'll start clearing out again. Clearing out the junk in the garage so we can get the car back in there. Clearing out the junk in the utility room so that we can walk in there without having to step over paint cans and a mess of disorganized supplies of all kinds. Cleaning up the garden before winter. Cutting down the plum trees that blew over in last February's storm but produced one last crop of fruit for us. It's easy to feel overwhelmed though.
Posted by Ken Broadhurst at 07:35