We had Yakitori chicken wings for lunch a couple of days ago. I had seen two recipes over the past few weeks, on in French (www.cuisine.tv) and one in English (New York Times). They were both appetizing. One recipe called for barbecuing either chicken livers, gizzards, or boneless thigh meat. We decided to do wings. That meant we didn't need skewers. We cooked the wings in the oven.

And I cheated. I bought a little bottle of Kikkoman Yakitori sauce when we were at the Paris Store Asian supermarket over in Tours a couple of weeks ago. I was browsing through all the sauces, and there it was. The ingredients listed on the container are pretty much the ones listed in the two recipes: soy sauce, sugar, wine, vinegar, molasses, cornstarch, and spices. 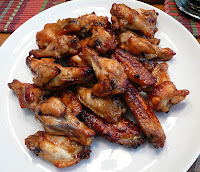 Marinate the chicken wings in that sauce, adding some pureed garlic and ginger, along with some more vinegar and some hot pepper paste or flakes, all to taste. After an hour or two, take them out of the marinade, arrange them on a rack or a silicon baking pad on a baking sheet, and put them in a hot oven. Turn them after 20 minutes, baste them with the rest of the marinade, and put them back in the oven for another 15 or 20 minutes. Turn the temperature down if they are browning too much.

We also got our first eggplant out of the vegetable garden at about that time. So we made a stir fry of onions, eggplant, and zucchini to go with the wings. I cut the vegetables into chunks and salted them for a couple of hours, letting them drain in a colander. Then I rinsed them and sauteed them in a wok with some sunflower oil, garlic, red pepper flakes, and Thai fish sauce. At the end of the cooking, I poured on the rest of the yakitori marinade the chicken wings had been basted with.

Meantime, I cut some fresh tofu (again from Paris Store) into cubes and fried them until golden brown in vegetable oil. When they were done, I drained them on paper towels and added them to the wok. They got coated with the cooking oil and marinade.

It was delicious with fresh basil leaves on top. The zucchini was actually better than the eggplant in the stir fry, because it held its shape and had a nice crunchy texture. The eggplant was softer, and the tofu was really good fried like that.

Cut chicken into one-inch pieces and place in a shallow dish.

In a small saucepan, combine soy sauce or tamari, mirin, sake or sherry, brown sugar, garlic and ginger. Bring to a simmer and cook for 7 minutes, until thickened. Reserve 2 tablespoons sauce for serving. Pour remaining sauce over chicken, cover, and chill for at least one hour (and up to 4 hours).

If using wooden or bamboo skewers, soak them in water for one hour. Preheat grill or broiler. Thread chicken pieces onto skewers, and grill or broil, turning halfway, for about 3 minutes for livers, 10 minutes for gizzards and 6 minutes for thighs. Serve drizzled with reserved sauce and garnished with scallions.

And here's a link to a French recipe for Yakitori de poulet on www.cuisine.tv. I think using chicken wings is a really nice choice for making yakitori.
Posted by Ken Broadhurst at 08:02