We were driving around, lost, and soon to be caught in a storm. Well, we weren't exactly lost, and we were making good time. We just didn't know how to get to where we wanted to go. The rain would soon start falling in sheets (tomber des cordes is the French expression, or pleuvoir comme vache qui pisse), and that wouldn't help matters. We had a map, but it would be impossible to read the road signs. It was Wednesday, July 21, 2010. 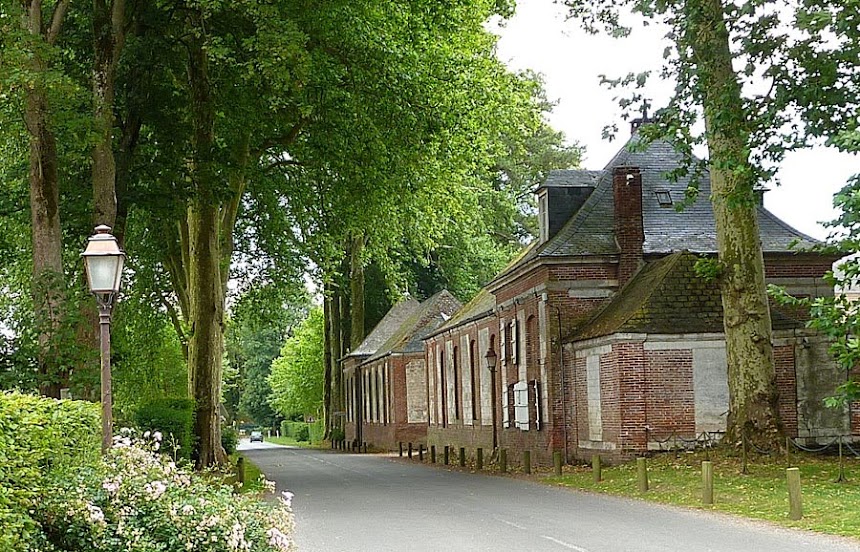 Arriving at Rambures, in the calm before the storm
Earlier, after lunch in Poix-de-Picardie, we had left the main highway at a place called Aumale, about halfway between Amiens (in Picardie) and Rouen (in Normandie). We drove up the valley of the Bresle river, through towns called Vieux-Rouen-sur-Bresle, Bouafles, and Hodeng-au-Bosc. At one point we crossed the river on a little bridge and we headed back into Picardy to find the Château de Rambures. I certainly had never heard of it, but CHM had (I think). He found it on the map. 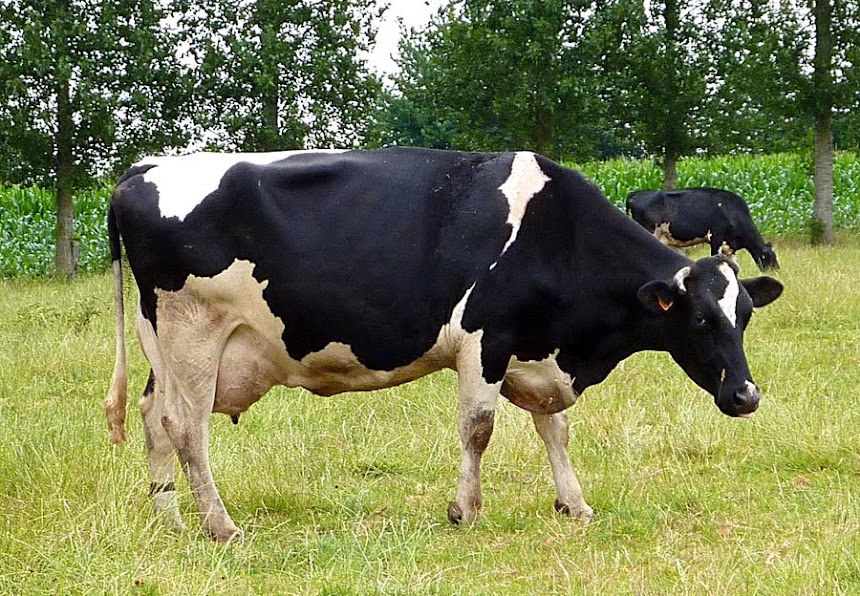 Cows that produce the milk for Neufchâtel cheese
It wasn't raining at that point. After driving around a while on unmarked roads, we turned left at Foucacourt-Hors-Nesle and before long found our way to Rambures and the château. Along the way, I stopped and took some pictures of cows. This is the Neufchâtel cheese production area, and Neufchâtel is one of my favorite cow's milk cheeses — so I needed a picture of a cow, n'est-ce pas ? This Neufchâtel, by the way, has nothing to do with the cream cheese we call by the same name in America. It's more like a Camembert, only saltier and... well, you'd have to taste it. 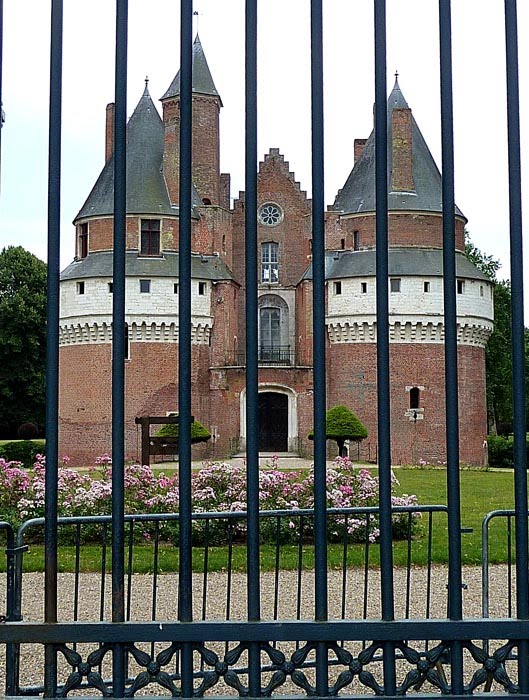 This is how we saw the Château Fort de
Rambures — it was closed that day.
The Château de Rambures was — wouldn't you know it? — closed on Wednesdays. The Michelin green guide hadn't been clear on that point. There was a parking lot, but it was empty and even barricaded. A couple of other cars stopped as we took some pictures of the château through the big iron gates. One young woman came up to talk to us. She too was disappointed to have driven all that way, only to find she couldn't enter the château or even the grounds. 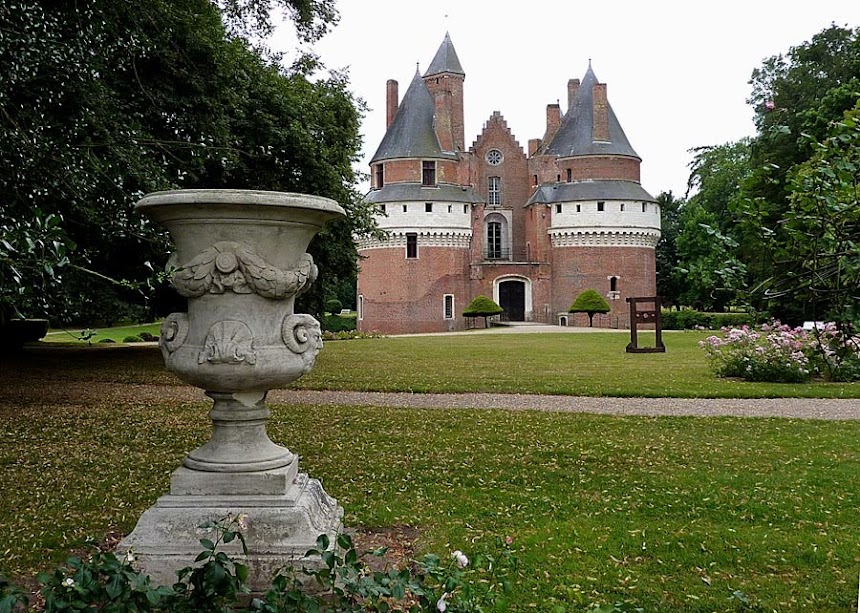 A photo of Rambures from a slightly better angle
According to its web site, the Château Fort de Rambures has been owned and occupied by the same family since the 11th century — that's 1000 years. There have been three different fortified castles built on the property during that time but, even so, the one that exists now dates back to the 14th and 15th centuries. It was fortified because the 100 Years War between France and England was raging at the time it was being designed and erected. Lord Rambures is mentioned in Shakespeare's Henry V. 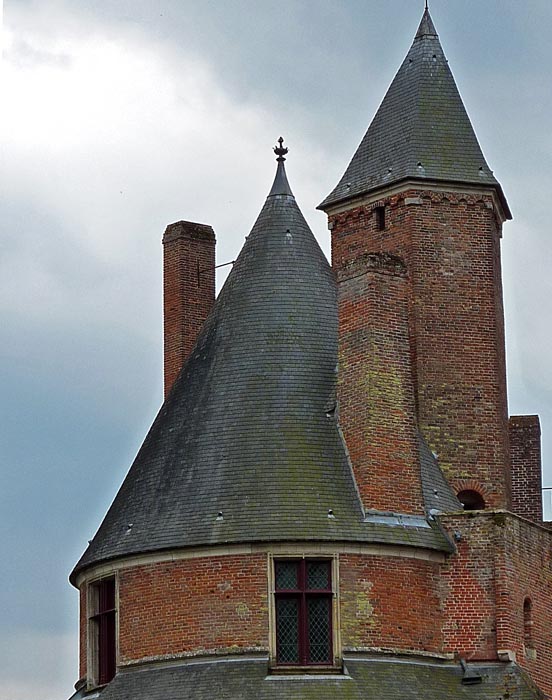 The old towers and steep rooftops
of the Château de Rambures
At Rambures, there's a 25-acre park with a fine collection of ferns and a rose garden planted with 420 varieties, both modern and heirloom. There's an English-style garden that was planted in the 1700s, when exotic trees including a sequoia and a black walnut were brought to Rambures from America and Asia. Of course, we didn't get to see any of that — but I'm not sure we would have taken the time to do so even if the château and grounds had been open that day. 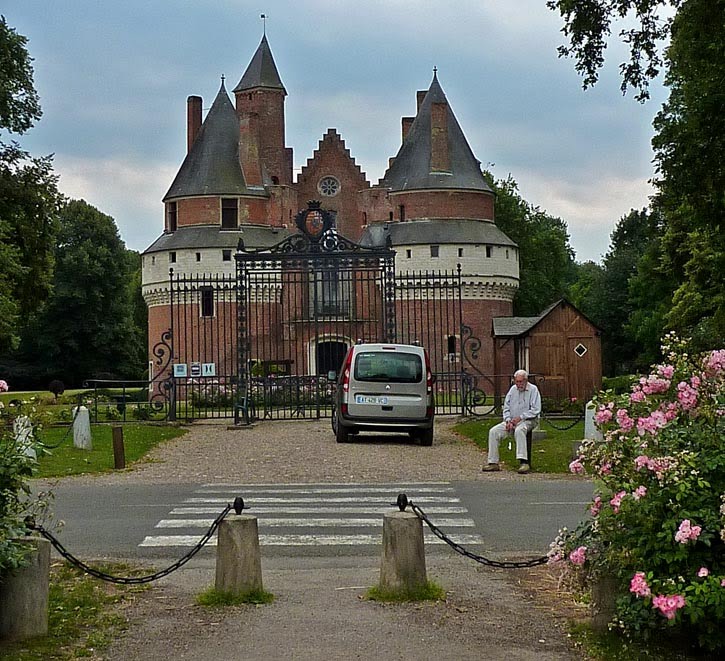 There's CHM waiting for me to take one more photo.
It was when we left Rambures and drove into Normandy at the town called Blangy-sur-Bresle that the heavy rain started. We were on our way to a place called Mesnières-en-Bray to see a château there, and then on to Neufchâtel-en-Bray for a night in a hotel there and a dinner featuring the local cheese.
Posted by Ken Broadhurst at 08:17