Changes for the better

The summer weather has come back. Yesterday was hot and mostly sunny — when I say hot, I mean perfectly comfortable, with little humidity. Vivement que ça dure ! Let's hope this kind of weather lasts for another month or even two.

Walt is feeling better. He's wearing his neck brace (un collier cervical in French). He doesn't seem too thrilled when I tell him I want to take a picture of him wearing it. But with the brace — it's a flexible (souple) collar, not a rigid one — plus the anti-inflammatory medication he's taking, he's in less pain. And he sleeps a lot more. I can tell from the expression on his face that he's feeling better.

Yesterday, instead of painting, we took care of zucchini business. That is, we chopped up seven— yes, seven — huge courgettes and threw them on the compost pile. We also picked six small zukes and took them over to the neighbors', where we are invited for lunch today.

Along with all that, we processed some patty-pan squashes for the freezer. And I made zucchini soup, using a recipe Elise posted on Simply Recipes. We had a small bowl each for lunch — delicious — and put three containers of it in the freezer for later.

Meanwhile, the grapes out back are looking better and better. I haven't heard yet when the harvest will begin. Most years it's in September, often toward the end. Only once, in 2003, did harvesting — les vendanges — start in August. 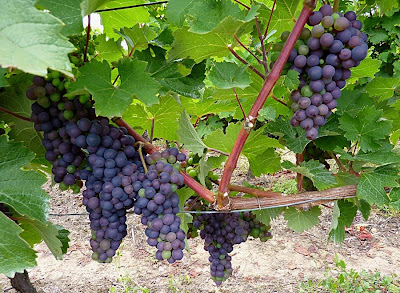 These are grapes are of the cépage called Grolleau.
They grow right outside our back gate.
We also harvested our first eggplant yesterday. There are more out there, but they need to get a little bit bigger before we pick them. Our fig tree, which we planted about five years ago, has had a significant growth spurt this year, and that's encouraging. We're still getting only two or three figs a year though. Maybe we'll get more next year. 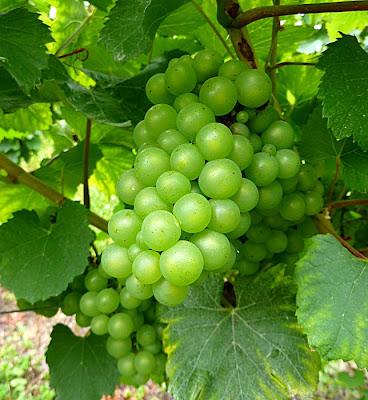 Jacques Denis, 80, who has tended these vines all his life,
told me back in June that these are Chardonnay grapes.
The plum tree I planted a couple of years ago has also grown a lot this year. Good. It will help replace the two that blew over in our early March windstorm. The neighbors tell us that their plums are very slow to ripen this year. I guess they're like the tomatoes. I've been eating plums off our fallen trees, and they are very good, but insects get most of them. This will be our last harvest before we cut up the fallen trees for firewood. 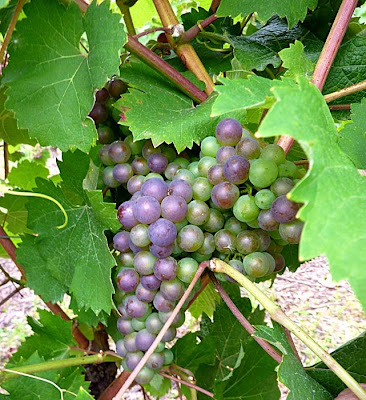 And Mr Denis said these are Pineau d'Aunis grapes,
which are mostly used to make rosé wines.
I need to go dig up the rest of the potatoes I planted in April. I see that our down-the-road neighbor François, the retired gendarme who has a huge vegetable garden, has dug up all of his potatoes now. He has put them all in a big pile on the edge of the plot where they grew. I assume they are drying in the sun, in preparation for long-term storage.

I keep thinking of a potato curry dish, with green peas, that I've enjoyed in the past. I think I'll make that this week.
Posted by Ken Broadhurst at 07:25