Things in the garden

The tomatoes have started coming in. They are a month late compared to last year. But they're looking good. We have at least three varieties in the garden, as you can see. The weather has again been rainy for a couple of days — we've had nearly 35 mm, not quite 1½ in., this week. We are hoping for more sunny days now. 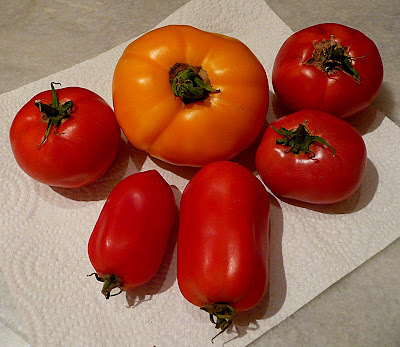 Every year there seems to be one kind of plant that just doesn't do well. Last year, it was green beans. This year, it's Swiss chard (bettes). Last year we had so many big chard plants that we didn't know what to do with them all. We still have some in the freezer. This year, we've gotten almost none, and the plants we put in the ground mostly look kind of sad. Except the one in the picture below. 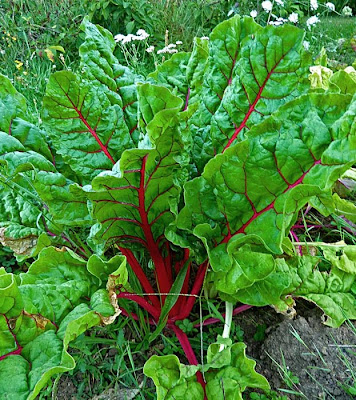 Another crop just coming in is some coriander (a.k.a. cilantro) that Walt planted after we harvested our last radishes back in late June. He planted cilantro in that plot. It's time to make some Mexican food, and more Asian dishes, I think. Callie is inspecting it carefully. 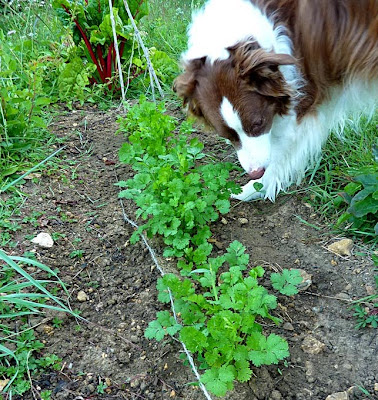 We had an unexpected visitor in the garden last week. It was a garden spider that built its web among the big leaves of the summer squash plants. This is a female. Evidently the male garden spiders are a lot smaller. 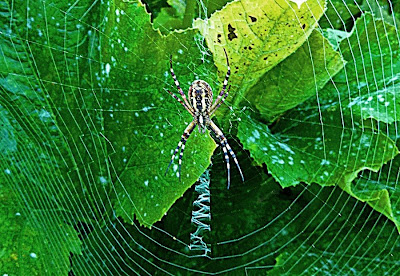 This is the first time I've seen garden spiders here in France, but they aren't uncommon, apparently. When I was growing up in North Carolina, we called these "writing spiders" because the pattern in the web looks almost like handwriting. Nobody knows what its function is. 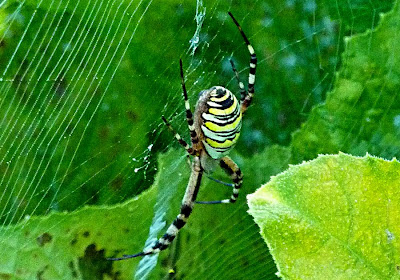 The female writing spider is fearsome looking, but her bite is only slightly painful and not dangerous. She's shy around humans, and not aggressive. Here's a link to Wikipedia articles in English and in French about the garden spider, which is called Argiope bruennichi or, also, the wasp spider. In French it's une argiope frelon — a hornet spider.
Posted by Ken Broadhurst at 07:30