You have to admit that they do look like some kind of « OVNI » — that stands for « Objet Volant Non Identifié » in French. An Unidentified Flying Object. But they are patty-pan squashes. They don't actually fly, but they grow so fast you might think they should be featured in a science fiction movie.

We had a whole batch of them last week — in French they're called « pâtissons » — and I decided to make stuffed squash, a.k.a "squash boats," out of them. Or squash flying saucers (soucoupes volantes) in this case. As I type this, there are six more patty-pans on the work table in the kitchen. I'm going to stuff them with ground pork — chair à saucisse in French — this morning and put them in the freezer for eating over the winter. 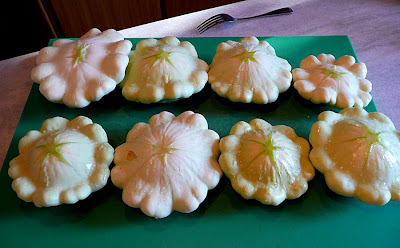 Patty-pans are summer squashes like zucchinis/courgettes
and can be cooked the same way. The taste might
remind you a little of artichoke.
Last week, I wanted to make a different meat stuffing for the patty-pans, with tomato sauce. I had about a pound each of beef and lamb in the freezer. The beef was chunks of stew beef (bœuf à bourguignon) and the lamb was slices of gigot d'agneau — leg of lamb. Walt put all of that meat through the food grinder to mince it up. 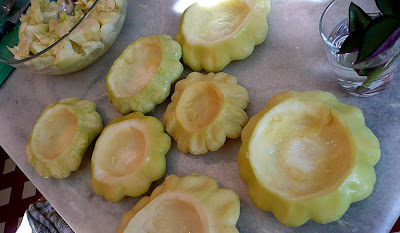 Cook the patty-pans in boiling water (or steam them)
to soften the skin and flesh before you hollow them out.
The easiest way to get the patty-pans ready for stuffing is to cook them in a big pot of boiling salted water for 10 minutes or a little longer, until they are partially cooked. Then take them out of the water and let them cool to the point where you can handle them without burning your fingers. 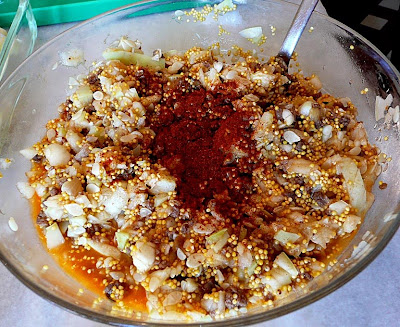 Save most of the squash flesh and mix in some raw rice
or millet — plus some paprika. Put this mixture
in the bottom of the baking pan.
Cut the top — or the bottom actually — of each patty-pan off with a sharp knife and then scoop out the seeds and part of the flesh of the vegetable, without piercing the skin. I've discovered that it's easier to cut out the bottom, and not the stem side, without making a hole in the squash. Chop the squash flesh and seeds coarsely and set it aside. You'll use some of it in the stuffing, and some will go into the bottom of the baking dish, along with some rice, as a bed for the squash to sit on. 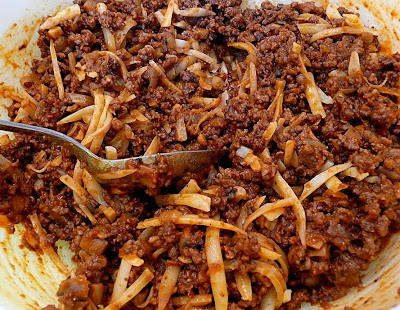 A meat stuffing with onion, garlic, cheese, herbs, and tomato sauce
For the stuffing, chop a big onion and some garlic and cook them in butter or oil until they are softened. Add to the pan some of the chopped squash flesh and the ground beef and lamb (or one or the other, of course — whatever you have or want) and cook that with salt, pepper, other spices, and a little tomato sauce until you have a kind of thick, fairly dry meat sauce — like what you would serve with pasta, but with less liquid. 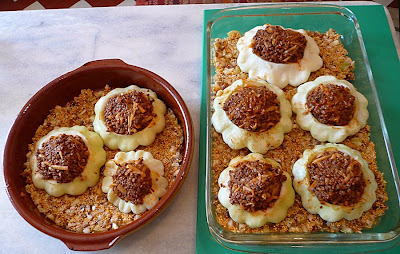 Patty-pan squashes with a meat stuffing
Let the meat sauce cool and then mix in plenty of chopped fresh herbs — parsley, basil, thyme, rosemary, etc. — and a good amount of grated cheese. Fill the patty-pans with this mixture. Add a little of the meat sauce to the extra squash flesh and mix in a good handful of raw rice (I used millet instead). Stir that together and put a layer of it in the baking dish you plan to cook the squash "flying saucers" in. 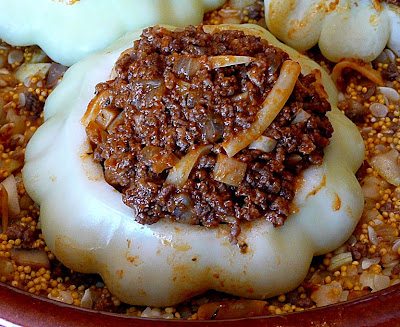 A stuffed patty-pan squash, ready for the oven
Put the stuffed squashes in the pan and pour in just enough water to cover the rice in the bottom of the pan. As it all cooks in a medium oven for 20 to 30 minutes, keep adding a little water so that the rice cooks completely without drying out.

Serve the stuffed squashes with a tomato or cheese sauce. They are tasty. Here's a post about another way of stuffing patty-pans, with rice and aromatics — no meat. There are plenty of French recipes for pâtissons farcis on the web — and American recipes too.
Posted by Ken Broadhurst at 06:50