At 7:13 a.m., I looked at some pictures I had just taken upstairs and realized that today is August 13. And it is a Friday. Better be careful today. Looks like it might rain again. Nice cool weather for painting. 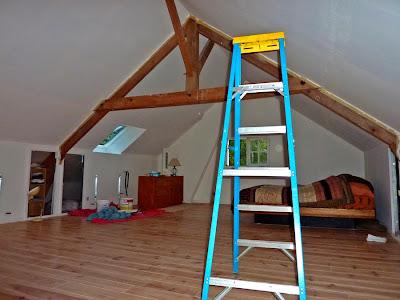 White walls (primer only, so far)
Our mornings are spent painting. Well, priming. We're making progress. There's a lot to do today. At the BricoDépôt warehouse store in Tours — Saint-Cyr-sur-Loire, really — on Wednesday, we bought 20 more liters of white primer (sous-couche), and 20 liters of white paint (peinture). Mat. Acrylic — water-based. Much easier to work with than oil- or solvent-based products.

So we are going to paint the upstairs walls white for now. Bright white. To make it at light as possible up there this winter. If we decide later that we can't live with pure white, we can always paint it again next year, in a different color. 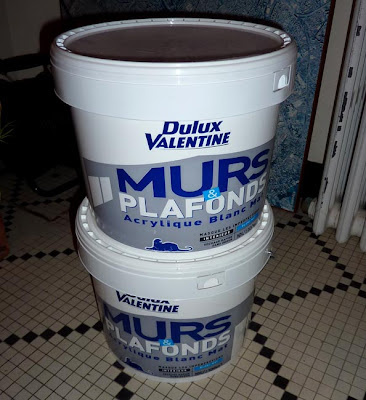 That isn't a typo: 6 euros. 5.35 €, actually. I hope it isn't a case of getting what you pay for, and for the moment it doesn't seem to be. The inexpensive primer is drying to a nice chalky white color. It goes on thin and doesn't seem to be covering much, but when it dries it's fine. Thanks to our friends on the Claise for the recommendation. 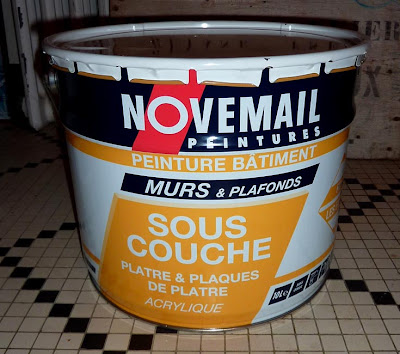 10 liters of acrylic primer for plaster or plasterboard
walls and ceilings
We paid 18 € for 10 liters of primer than says it's good for both drywall (paper-coated plaques de plâtre, also known as placo, wallboard, plasterboard, and sheetrock) and real plaster. The walls we have to paint on the ground and main floor of the house — the entryway and stairwell and hallway — are real plaster. We still have all that to do, after we finish the upstairs. I figured if the 6 € stuff was garbage, we'd fall back on the 18 € stuff, and then buy more later if we needed it. Looks like we won't.

Priming in the morning then, and working on the vegetable garden in the afternoon. Processing squashes for the freezer, mostly, right now. Tomatoes are starting to ripen. Eggplants and peppers are growing. Corn is forming ears. Potatoes continue to come in. Busy August.
Posted by Ken Broadhurst at 07:20