French cooking isn't necessarily fancy or complicated. Much of the food we eat here in France is very simple — especially the salads. Often French salads are just one ingredient, dressed with vinaigrette. Here are some standard ingredients:
The closest you get to complicated, with multiple ingredients on one plate, is when you have an assiette de crudités — that's a plate with several of these simple salads served side by side, not all mixed together.

I made a standard French salade a couple of days ago — it was haricots verts en salade — a salad of cooked green beans. Then I started reading about it. I have a set of cookbooks that I draw on for ideas and methods. 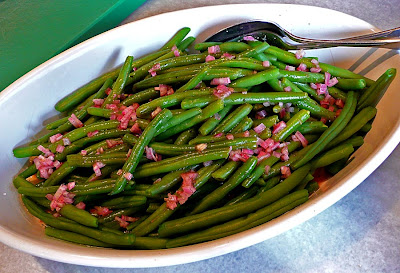 Haricots verts en salade, with a vinaigrette dressing
and a finely chopped shallot
First, I looked at La Véritable Cuisine de Famille, by Tante Marie (ca. 1920). She says, in very few words, to put some cooked, drained green beans into a salad bowl and season them the way you would season an "ordinary salad." Obviously you need to know how to season an ordinary salad, French-style, if you want to make these.

What is a salade ordinaire, anyway? In France, it's just some lettuce leaves in a vinaigrette dressing. It's not something you see in French restaurants much any more, but it's often one of the courses, right before the cheese (or even with it), that make up meals prepared and served at home.

So how do you make a vinaigrette? Tante Marie says hers is composed of some chopped parsley, a chopped shallot, a tablespoon of vinegar, a tablespoon of oil, and some salt and pepper. Nowadays, however, French vinaigrette dressings nearly always have some amount of Dijon mustard in them.

In Je Sais Cuisiner, by Ginette Mathiot (first published in 1932, I've read — my copy is ©1970 — and recently translated into English as I Know How to Cook), the recipe for making haricots verts en salade is just as cryptic. It says to cook some green beans, drain them, and season them with vinaigrette.

Look up vinaigrette in Mathiot's book and you'll find the same recipe you find in Tante Marie's, with one exception. Mathiot specifies one tablespoon of vinegar but three tablespoons of oil. Those are the proportions most people use nowadays. Use less oil, and the vinaigrette is too vinegary.

Maybe Les Recettes d'une Grand'mère (et ses conseils), by Renée de Grossouvre (1988) will be more help. She says to cook some green beans, drain them, and let them cool until they are just lukewarm. Then make this dressing:

That's the standard vinaigrette today. Whisk the dressing until it is well blended (emulsified) and then pour it over the beans. Toss the the beans in it. Add some chopped fresh herbs (parsley or chervil) and a chopped or thinly sliced French shallot if you want. You can use a very small onion if you don't have a shallot. That's it.

Did I mention that you also need to know how to cook the beans? You do that in a large quantity of water that has been brought to a rolling boil. Don't cover the pot or the beans will lose their bright green color. Let them boil, the French books say, for 15 to 20 minutes. (You might want to cut that time in half.) To be fair, Madame de Grossouvre says the cooking time is a function of the quality of the beans — the fresher they are, the less cooking they need.

It's gardening season. The beans are very good right now. Cook them just enough and season them with the simplest vinaigrette dressing. Enjoy them for the flavor of the beans, not the extra ingredients you might put into a more complicated dressing. Mustard, vinegar, and oil are all you need. Herbs, onion, shallot, or even garlic are optional. No sugar!

By the way, I looked in the Joy of Cooking and I didn't find anything resembling these French recipes for making a green bean salad.
Posted by Ken Broadhurst at 07:59