I always tease my good friend Marie, who is an English teacher in Normandy, about the weather up there. She gets tired of it, I'm sure, but she's a good sport. It really doesn't rain in Normandy all the time.

You see, I lived in Rouen for a year, way back when I was a young teacher. One of the first things I learned there was something told to me, maybe facetiously, by the principal of the high school where I worked. To help me adapt to the climate, he said: "Remember, in Normandy, it doesn't rain very much. It just rains all the time." It's that fine, misty drizzle that can get to you. 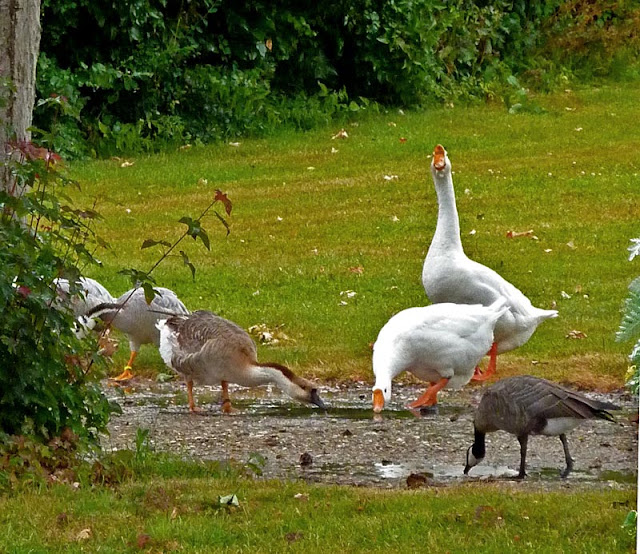 It was good weather for geese, that day.

Well, this time, when we entered Normandy through Blangy-sur-Bresle, we caused quite a splash. Literally. Here we were, two American senior citizens (me a sexagenarian — that's less fun than it might sound — and CHM an octogenarian — no, no tentacles) tooling around in our Renault Kangoo utility vehicle, when suddenly the skies opened up. The bottom really fell out. 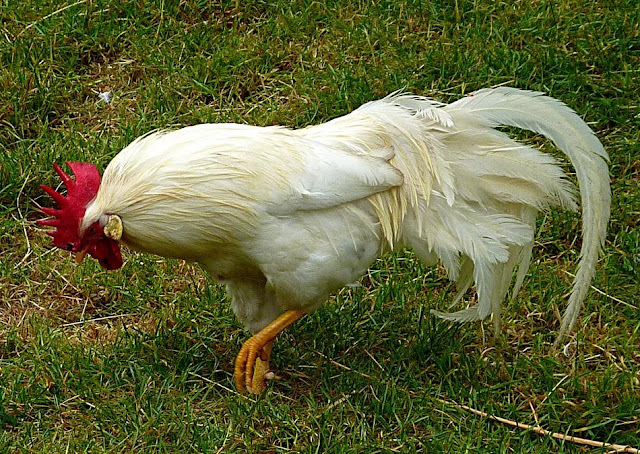 A rooster either strutting or hunting, after the heavy downpour

It was a rainstorm that people in North Carolina might call a frog-strangler. Des trombes d'eau, they say in French. Raining buckets. And we were on little back roads through hilly country, with very few road signs. For part of the way, we drove through dense forest. The Michelin guide for Normandy calls this region of Normandy "the Bray Buttonhole" — "Wide and deep undulations were formed" here by movements of the Earth's crust in the Tertiary area, when the Alps were pushed up farther south. "The whole area is a watershed," Michelin says. I was convinced. 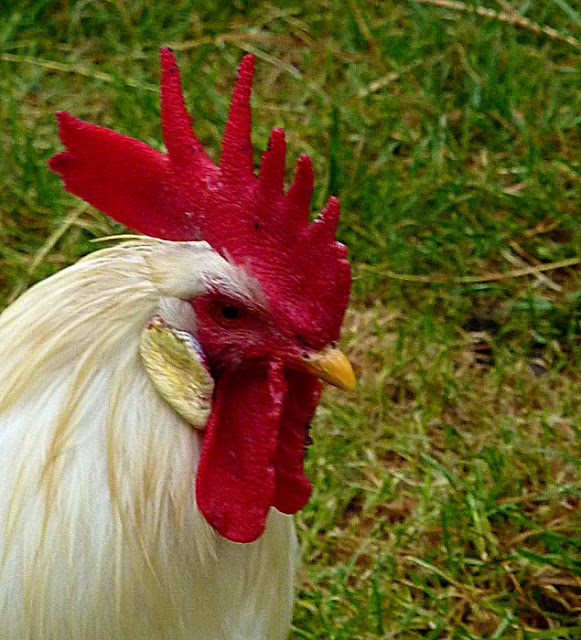 Here he is, close up. Nice comb.

The sections of road that go through forest are shown on the map in the Michelin Road Atlas as scenic routes. We couldn't see much, though — it was too dark. Many of the roads we were on didn't have route numbers on the map. The ones that did have numbers on the map were as often unmarked as marked by signposts. We just had to keep going, hoping we might be headed vaguely in the right direction. The rain kept pouring down. 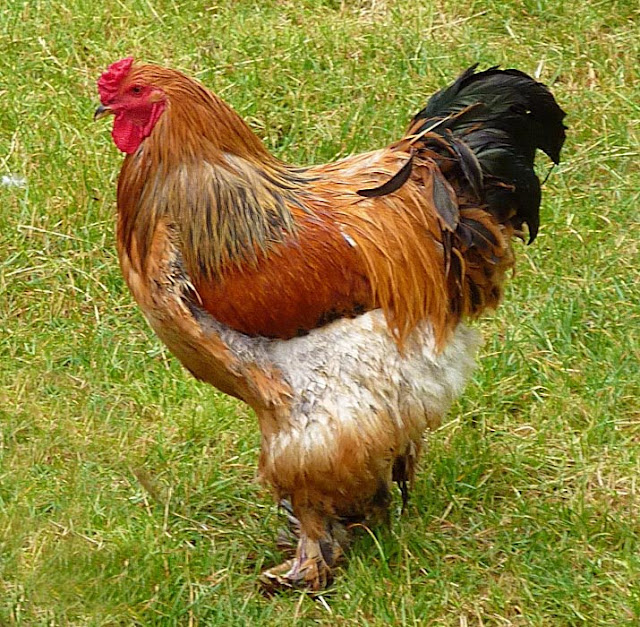 It's only about 30 km/18 miles from Blangy-sur-Bresle to Mesnières-en-Bray, our next stop. It seemed a lot longer. The two forests we drove through are called La Haute Forêt Domaniale D'Eu — Eu is a town near the coast — and La Forêt du Hellet. I liked a lot of the local place names: Croixdalle, Bonnerue, Smermesnil, Houppelande, Fresnoy-Folny, Mesnil-Follemprise, and Saint-Vaast-Equiqueville, to cite just a few. As you can imagine, the rain and a focus on driving on curvy roads prevented me from taking any pictures. 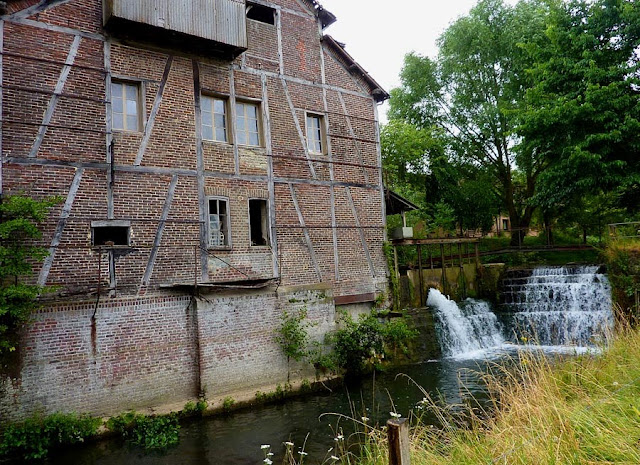 The mill and millpond at Mesnières

Finally, we found a little narrow country lane called the Route de Lucy — Lucy is a village — and we knew we were almost there. I remember passing two tourists on bicycles. They were a middle-aged couple, probably English or Dutch. We were going down a steep hill at the time, which meant they were trying to pedal up it. I flashed my bright lights so that they would be sure to see us coming. They smiled at us gamely as they struggled up the hill in the driving rain. 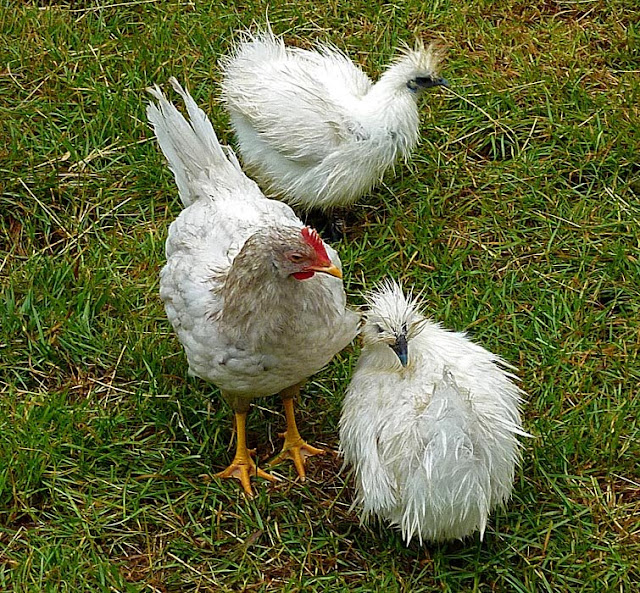 I guess these are all chickens.

Our destination was the town — village? — called Mesnières-en-Bray. There's a château there. Since the 1820s, the building — a Renaissance edifice reminiscent of the Loire Valley castles we know so well — has been used as a school that teaches general courses as well as horticulture. We didn't expect to go inside. We just wanted to see it from the outside, maybe just from the car windows. Maybe get out and take a picture or two. But with the rain that was falling, it seemed increasingly unlikely that we would get even a glimpse of it. 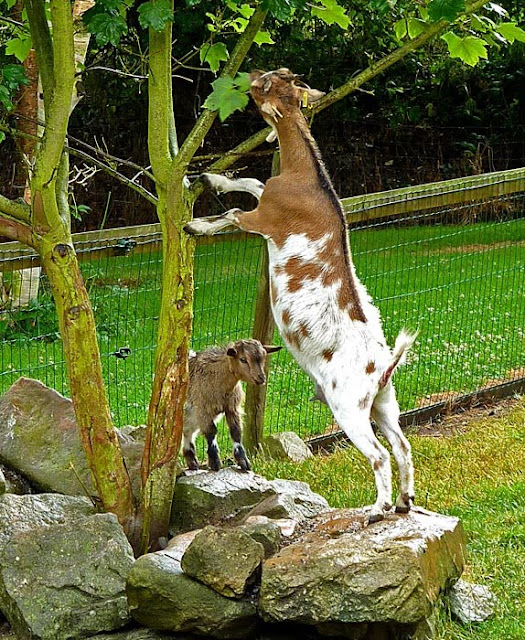 Goats climbing up on rocks and trees

We drove into the village from the east, where the Route de Lucy intersected with the main road through the town. We turned right, toward the Dieppe to the north, looking for the château. I remember roads that were flooded, and people out in slickers with brooms, trying to unclog storm drains so that the water could run off rather than pond up. In a couple of minutes, we found ourselves back out in rase campagne — open country — a realized we had gone too far and in the wrong direction. 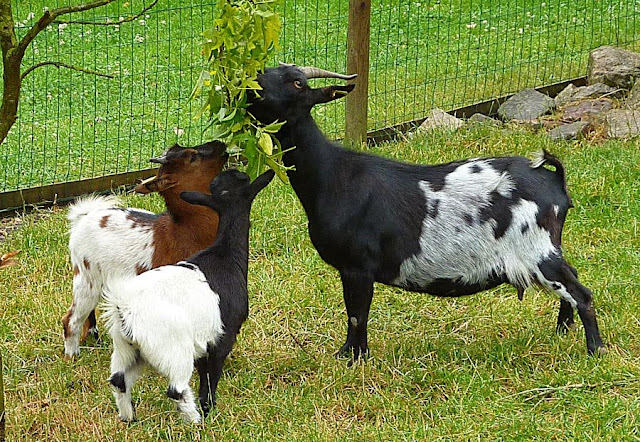 This tree doesn't stand much of a chance.

Where was the château? In such a small town (pop. 706, according to Wikipedia), an enormous building shouldn't be all that hard to find. Blame it on the rain. We were having a hard time seeing much at all. I pulled off the road and turned around. A big tractor-trailer rig roared by, sending spray everywhere. A couple of miles south, right in the middle of the village, this time we noticed a sign — Château >> — pointing to the right. 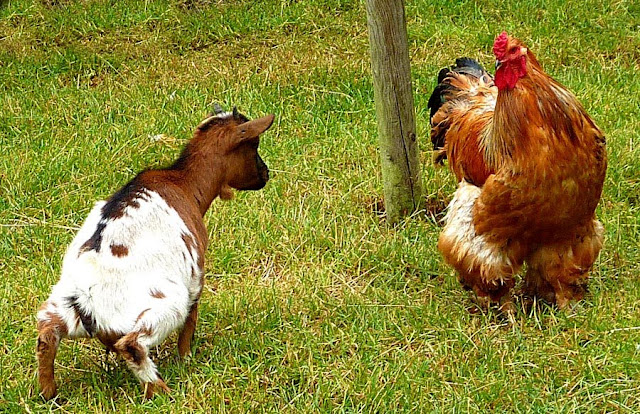 And the rain suddenly slacked off. By the time we drove a mile up the road and found the entrance to the château, it had pretty much stopped. There was a ray of sunshine, and everything look and smelled fresh and clean. There was a little parking lot for maybe 10 cars, and it was empty. We parked there and even got out of the car. So I got some pictures after all. Snapshots of the Château de Mesnières. And in a pen on the grounds, near the parking lot, there were chickens, roosters, geese, ducks, and goats. We enjoyed being out of the car for a few minutes and not having to walk too far to find something interesting to look at and photograph. Sometimes what you actually see is more interesting that what you set out to see.
Posted by Ken Broadhurst at 07:30