Out in the vineyard in August

I did something yesterday morning that I hadn't done in quite a while. I took my camera with me when I went on my morning walk out in the vineyard with Callie.

The grapes are definitely starting to ripen. I wish our tomatoes would do the same — though Walt did say yesterday that he saw evidence of ripening. A year ago, we had ripe tomatoes in July, and I have the pictures to prove it. This is what I blogged about a year ago on July 31, and I even see pictures where tomatoes were getting ripe as early as July 8 and July 12, 2009. This year, everything is late. 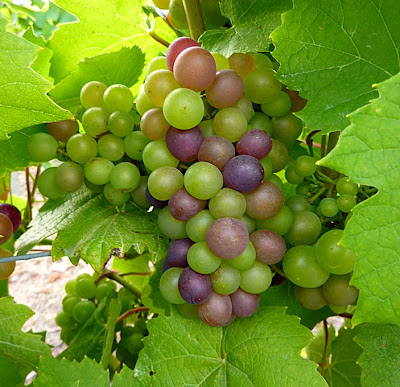 The grapes are just starting to turn color.
But as I was saying, the grapes are beginning to ripen here in Touraine. The summer of 2010 has been a lot like the summer of 2009, with the exception of the two or three weeks of chilly weather we had this year in June. That explains a lot.. 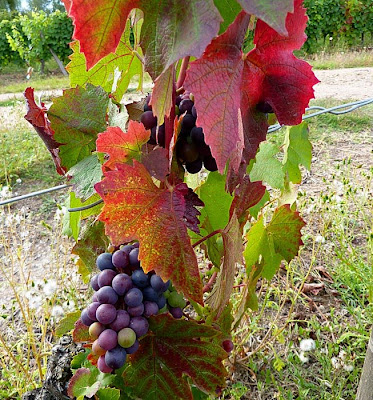 These are looking like autumn already.
The worst summer we had was in 2007. That year, April was abnormally hot, and thought we were in for a long hot summer. But May, June, July, and August were damp and downright cold. Weeds took over the vegetable garden, choking out nearly everything we had planted. We got almost no tomatoes that summer. If it hadn't been for a three-week warm spell in September, the grapes might not have ripened in time for the late-September harvest — and even then, the cold rains came back starting around September 20. 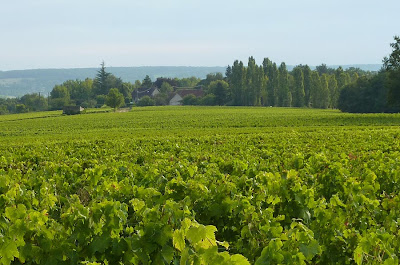 The Renaudière vineyard is a carpet of green in mid-August.
That's our hamlet in the background.
Our best summers came in 2005 and 2009. 2005 was probably the ideal. In 2009, it was so dry and warm that there was no need to mow the lawn after July 15 — the grass and weeds simply stopped growing. It was the opposite of 2004, when we had the rainiest August in 40 years in this part of France. 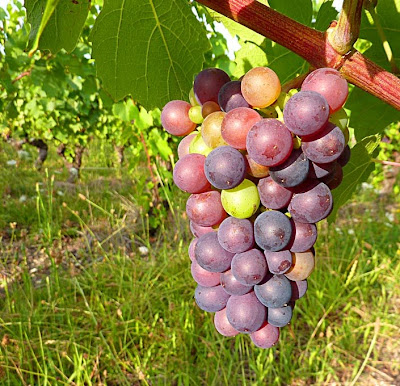 I'm starting to see a lot of bunches like this one.
Of course, 2003 was the year of the great heat wave, when so many people in France died of heat exhaustion. We ourselves thought we might perish. We haven't seen anything like that again. This summer, we had some hot weather in June and July, but it's hard to remember a day when it was so hot that we serioulsy wished we had air conditioning in the house. 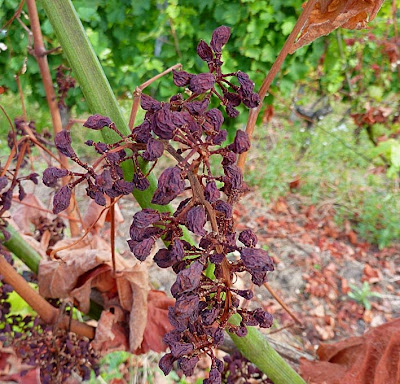 And these have turned into raisins on the vine.
Overall, 2010 has given us a good summer, but because of poor weather in June the garden and grapes are pretty late this year. We had a lot of rain in July, but it came in downpours rather than long periods of drizzle, it wasn't unpleasant. There were nice thunderstorms. The ground is still dry. August has been cooler but with little rain so far. Today it's gray and almost chilly — strange for August 15.
Posted by Ken Broadhurst at 08:21