The work in the attic feels like it's dragging now. Yesterday only one man came to work — his younger helper twisted his ankle playing football over the weekend, we were told. So Coco worked alone. He did make good progress. He put up the railing around the stair cavity. Now trips to the attic are less vertigo-producing. 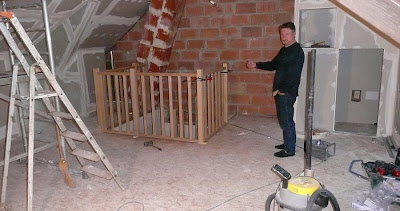 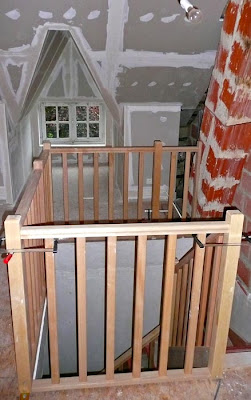 ...and another shot that shows the railing
and the front alcove and window.
The weather is just lousy. Yesterday I spent some time reading my own blog posts from May 2009 and May 2007. What I learned, or now remember, is that this is typical weather for early and mid-May — one of my older posts was titled "Damp, damper, dampest" and other was "Enough with the rain already!" I could re-run those this week, because the weather is exactly like that. 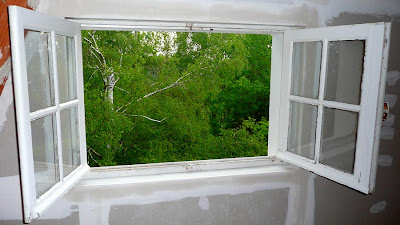 Did I mention how green everything is outdoor?
This is a view out the attic window.
Yesterday we had some thunder and lightning in the afternoon. But at least we didn't have the sleet and hail that were in the forecast. We still haven't planted anything but potatoes out in the garden, and those are probably drowning. It rained steadily and pretty hard most of yesterday afternoon. I was only able to take a short walk with Callie, out on the paved road. Everywhere else was too muddy. We had to turn the heat on in the afternoon.

Yesterday and the day before, I was talking about my trip to the market on Saturday morning, which was the nicest few hours we've had, weather-wise, in a while. I bought strawberries, which you saw on Walt's blog yesterday — he made the almond-berry tart. I also bought goat cheese. 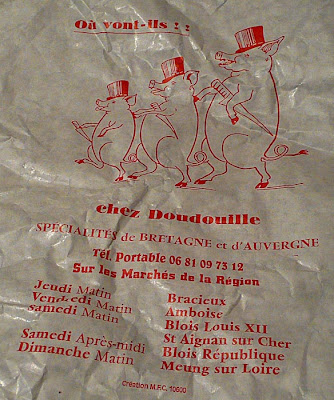 Doudouille wraps its meat products in this paper.
And I especially enjoyed going to talk to the woman who sells charcuterie at the Chez Doudouille stand. I hadn't seen her in quite a while, because over the winter it was just too cold and miserable to enjoy going to the market. Then in April I went down there just once on a Saturday morning, and that turned out to be a day when Mme Doudouille was on vacation with her family.

Pork and poultry really are the mainstays of the Loire Valley diet. The pork comes fresh, salted, smoked, or made into pâtés, terrines, or sausages. Pork rillettes — shredded lean pork cooked in pork fat with white wine — are a local specialty. 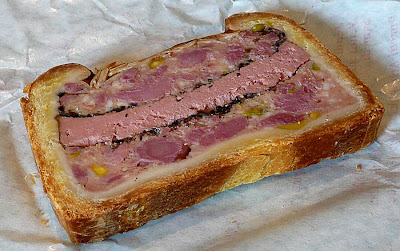 A slice of pâté en croûte from Chez Doudouille,
with pistachios and slivered almonds
But what I bought from Chez Doudouille was some smoked pork breast (a.k.a. slab bacon), some thin slices of lean smoked lean pork that is called bacon (pronounced bay-KUHN) here in France — it's "back bacon" and resembles Canadian bacon) — as well as a length of traditional French-style boudin noir (blood sausage, but not the spicy version), and a big piece of saucisse de Toulouse (fresh pork sausage). 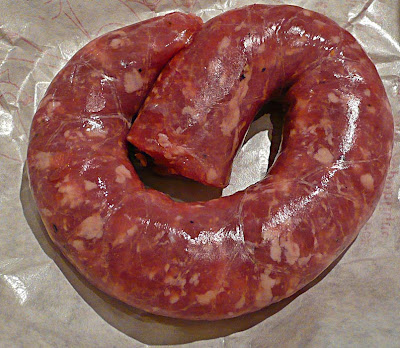 Saucisse de Toulouse is good poached or grilled.
That's what we are eating, along with a lot of asparagus, during this late-spring cold spell. We had the blood sausage, crisped up in a pan in a hot oven, with nice mashed potatoes and a salad for lunch on Sunday. The Toulouse sausage is in the freezer for another day. The smoked meats will keep for a while in the fridge, so I'll figure out what to do with them over the next few days. Maybe another fougasse/foccacia bread. 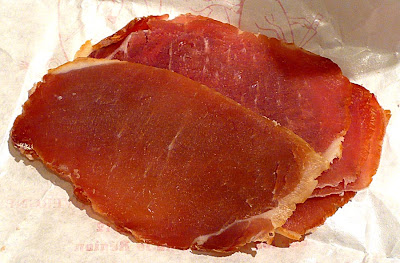 Bacon — lean smoked pork, not "streaky bacon" as in America
So it's a waiting game now. Waiting for the attic work to be finished. At that point we can start staining, varnishing, and painting. Waiting for the weather to improve. Then we'll be able to plant the garden. It's not late — planting normally starts here on about May 15. Meanwhile, walk the dog, pet and feed the cat, hang wet laundry up to dry in the utility room, and cook and eat. We try to entertain ourselves the best we can.
Posted by Ken Broadhurst at 06:57