I've waited a little while before posting this morning because I was hoping to be able to report that Coco and crew had showed up and picked up the attic work where they left off on May 12. No such luck, so far. It's 9:00 a.m. and usually we see them by 8:30 if we're going to see them at all.

Thursday May 13 was a holiday, and a lot of people also take that Friday off, making it into the long Ascension Day weekend. For those four days, we didn't expect to see anyone at work. Then on May 17 and 18, the electrician-plumbing contractor's crew came in and got all the rest of that part of the work done. 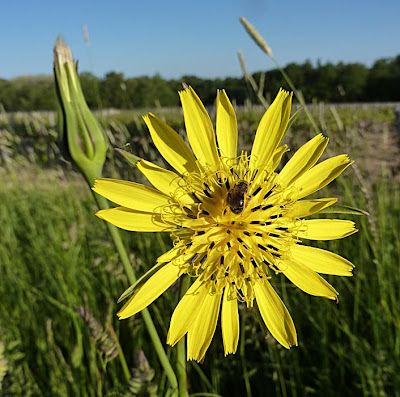 Flowers and bees around the vineyard
Last Thursday and Friday, rien. Que dalle. Nada. Zilch. On Friday, I called Jacques, the quasi-general contractor. Really, the idea of having a general contractor here in France is unheard of. Nobody seems to be really in control of the work schedule. When the plumber needs to be called in to do his job, it's up to us to call him. He works independently of the guys doing the walls, stairs, and floors.

In our case, we do have somebody who is kind of unofficially managing the project. She's done great, but she isn't actually the general contractor. She's just helping out, because she has worked on many renovation projects here in the Saint-Aignan area over the years, and she knows many of the local artisans/contractors. She's English but has lived here for 25 years. She's really helped us out. 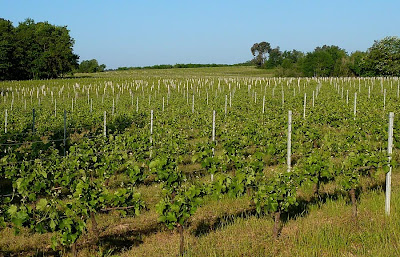 Here's how the vineyard looks in late May.
The weather has been very dry.
Walt called her Friday afternoon, after my morning call to Jacques went unanswered. She came over Friday afternoon for a glass of wine and a visit.

"I called Jacques and his wife Elisabeth this morning, hoping to get some idea of when the work will start up again," I told her. I didn't go so far as asking when it might be finished, but that's what I really want to know.

"Oh, they left this morning for a long weekend in Brittany," our English friend S. said. "They won't be back until Monday or Tuesday." Yesterday was le lundi de Pentecôte, also a holiday. 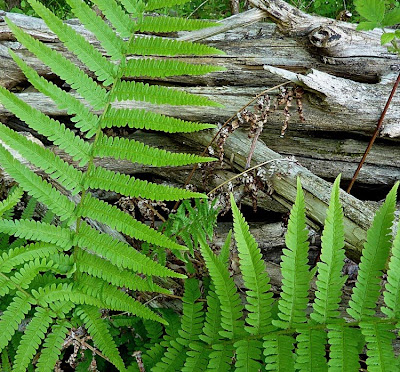 Ferns in the woods along the edges of the vineyard
As we talked, I learned that the doors for the 5 or 6 storage closets up in our new attic space hadn't come in yet. They are expected this week. S. said — May 25 or so. I can only assume that Coco wants to get those doors put in before he nails down the new floorboards. That would make sense, I guess.

So that's probably why the work has been delayed. The contractors can blame it on us, actually. We don't get much information out of them, but there was some talk earlier about how we should order and pay for the doors ourselves, and go pick them up over in Tours. We didn't want to do that, mainly because if we pay for them we have to pay the 19.6% TVA rate, whereas a professional can buy them at a 5.5% tax rate. Having Jacques or Elisabeth order them will save us $150. 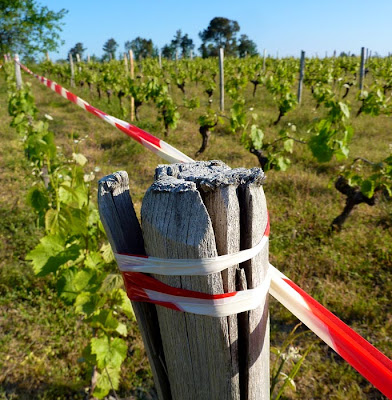 The red plastic tape is supposed to keep the local deer
from munching on tender new grapevine leaves
Once we finally communicated our preference that Jacques and Elisabeth — she keeps the books, does the ordering, prepares quotes, and sends out bills — order and pay for the doors, they did it. But a good week, maybe two, had gone by in the meantime. So from the professionals' point of view, the delay is probably attributable to us. 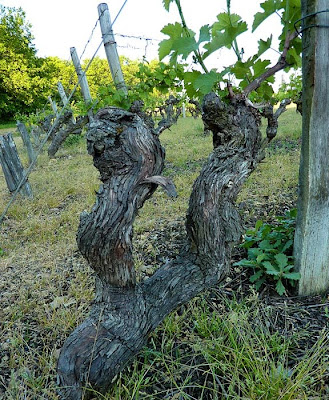 Old vines
We have company coming in a month, and we are going to have a lot of sanding, varnishing, and painting to do as soon as Jacques and Coco finish their part of the job. It's going to be tight. The doors and floors (the flooring has come in) need to be done, and there's still one wall to finish, right over the stairs.

Maybe Coco went to pick up those closet doors this morning. I hope so. Or maybe he's gone down to Provence to do some work for Peter Mayle.
Posted by Ken Broadhurst at 09:15