I was beginning to think I done something radically wrong. Maybe I planted them too deep. Or upside-down. Maybe that week I waited from the time Jean and Nick gave me the sprouted seed potatoes was too long, and the sprouts had died.

Then this morning I went and inspected the potato patch. Finally, they have come up. I had no idea how long it should take for potatoes to come up. Again, patience is the key. 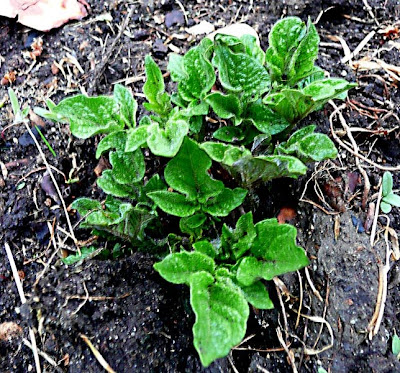 This is a terrible picture — it's a potato plant — but it's
so gray and dark outside that my camera can't cope.
Unfortunately, the weather has turned carrément froid — downright cold. The weather forecaster used this expression this morning: « Ça caille ! » The verb cailler means "to clabber, curdle, clot."

In other words, it's freezing outside — liquids are starting to gel. It's also gray and windy, and late yesterday afternoon we had sleet, or rain with ice pellets in it. That gives you the idea... We might have to turn the heat back on. 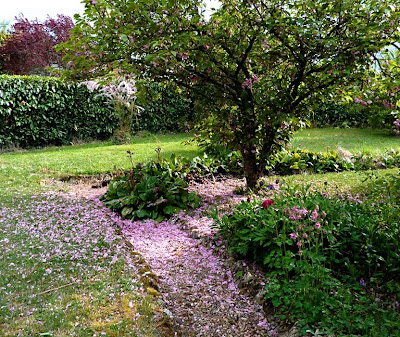 Instead of falling leaves, we have falling flower petals.
Strong winds blew most of the blossoms off the
ornamental prunus tree over the weekend.
Again, on the weather report earlier, they were saying that it feels like we had our summer, and now it's autumn. It's not true, of course, but last week was sunny and hot. As I've noted before, the weather here in the Loire Valley is seldom boring.
Posted by Ken Broadhurst at 08:23