Yesterday was a holiday. May 8 is the day when the Allied victory over Nazi Germany in 1945 is celebrated. There was a festive atmosphere on market day in Saint-Aignan, and the weather was much better than predicted. Rain was coming in, but after noon. 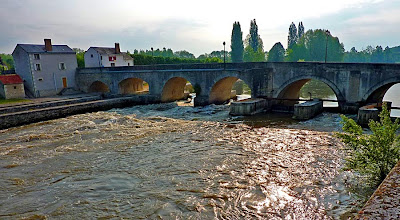 The bridge over the Cher River at Saint-Aignan
We didn't need any more white asparagus, because I bought some at the supermarket a couple of days ago, but I wanted to look for green asparagus for a friend who really likes it. I didn't find any, but the white asparagus was down to 3 € a kilo — half what it cost a couple of weeks ago. The price of the local gariguette strawberries has dropped similarly. 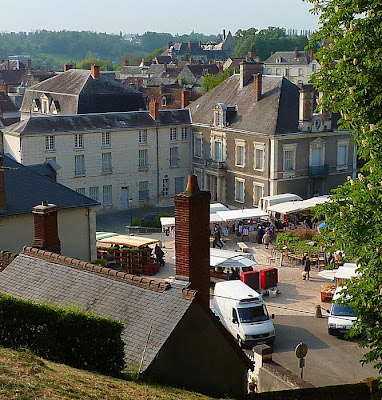 Looking down into the market from up at the château
Anyway, the market was my destination. When you drive to town from our house, you can park the car in a lot by the old bridge. From there, you can walk up a steep, narrow staircase between houses and wind up at the base of the old château. 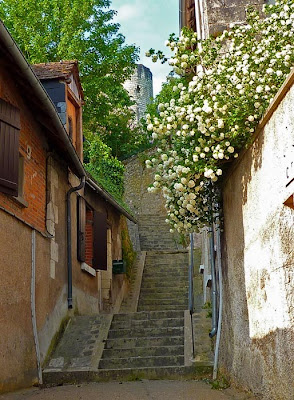 Steep steps lead up from the river to the château's
thousand-year-old medieval tower
From there you can continue under an old stone archway and down a paved road lined with horse-chestnut trees. You end up at the market, which is being held temporarily in the upper town while the old marketplace down nearer the river is being repaved with cobblestones. 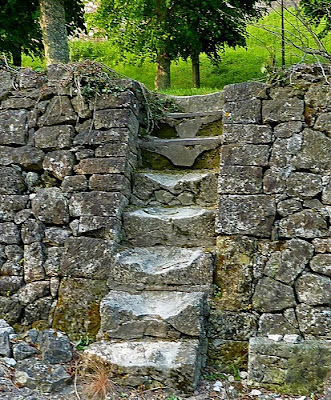 Old stone steps up to the château at Saint-Aignan
You can also detour up onto the main terrace of the château, where you get nice views out over the river and bridge behind you, and over the rooftops of the town just below. I decided I would follow that detour and take some pictures, enjoying the fine weather and nice light. 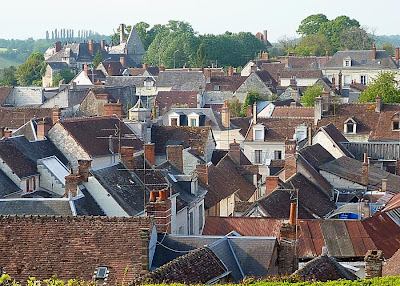 The rooftops of the old town
From up on the château terrace, you look straight down into the market. I could see that it was busy but not too crowded. Doing my shopping would be a pleasure, and some of my favorite vendors would probably have time for a chat. It was my first trip to the market in a month.
Posted by Ken Broadhurst at 06:53