I didn't mean to imply, yesterday, that the only way to get to the market in Saint-Aignan is to climb over a steep hill, up staircases, through the château grounds. There is a big parking lot right across the street from the place where the market is being held this spring. You can drive in and park just a few steps from the vendors' stalls. 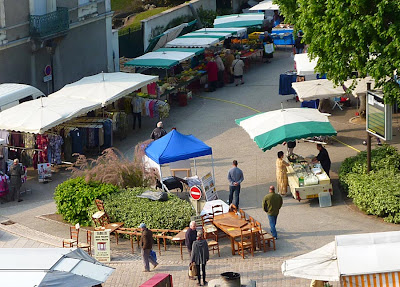 Looking down at the market from the grounds
of the château in Saint-Aignan
Walking up over the hill from the river lot is just the most scenic way to go, and it's good exercise. You can take a lot of nice pictures if the weather is good.

A château was built on the site that is now Saint-Aignan as early as the 9th century. The old fortified towers of that structure, in ruins, remain. The town, then known as Saint-Aignan-en-Berry, grew up around the château. 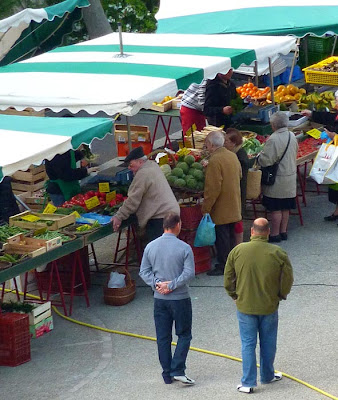 The market in Saint-Aignan-sur-Cher
is set up on Saturday mornings.
Saint-Aignan sits at the point where three old French provinces — Le Berry, La Touraine, and L'Orléanais — come together. Walt and I bought a house that, while less than two miles from the center of Saint-Aignan, is historically in Touraine — the Berry-Touraine border runs somewhere between us and town. 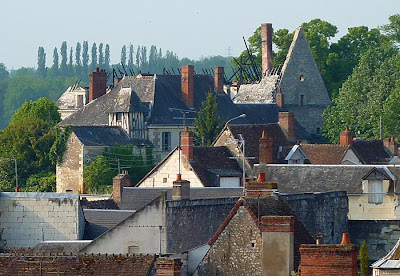 The building called Les Bernardines
suffered a bad fire a couple of years ago.
One of the most striking landmarks in Saint-Aignan is an old convent and school, Les Bernardines, built I think starting in about 1640. The schools still exists, but in a different building. The original structure was abandoned for years, vandalized, occupied illegally by squatters, and finally, a couple of years ago, ravaged by a major fire. Nobody knows what fate awaits it now. Here's an interesting document (PDF) about Les Bernardines, with quite a few pictures. 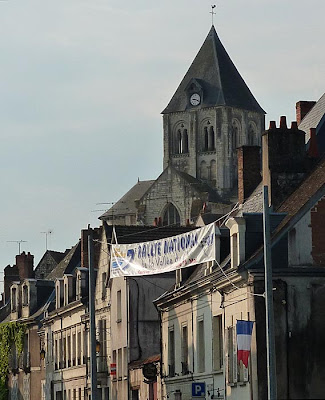 The church at Saint-Aignan-sur-Cher
The church is another major Saint-Aignan landmark. It was built in the 11th and 12th centuries on top of an even older chapel. A new side chapel was added in the 15th century, and during the French Revolution at the end of the 18th century the whole church was sold off at auction. It was turned back into a church within about 10 years, however, and new belfry was added in the 1870s.

My destination Saturday morning was the market. I wanted strawberries and goat cheeses, and I wanted to see if my favorite charcuterie vendor, who we call « Madame Doudouille » because the name of her business is Chez Doudouille, would be there.
Posted by Ken Broadhurst at 09:01