Belgian visitors, a winery and a restaurant

Yesterday Ladybird of the blog Wishing I were in France (she is!) came to Saint-Aignan for apéritifs, a visit to one of our favorite wine caves, and dinner at Le Crêpiot, a Saint-Aignan institution. She brought with her two friends of hers, a retired couple about my age who live in the Brussels area. We had a really nice evening.

One thing everybody wanted to do was go see our neighbors the Guerriers to buy some wine. Ladybird and her friend C. from Brussels were here about a year ago and they bought some wine to take back to Belgium. They wanted more, and Ladybird's friends wanted to take some home too.

It's always fun to go taste wine with the Guerriers. Jean-Noël is a character, and Chantal is always smiling and cheerful. We tasted their 2009 Sauvignon Blanc white, Pineau d'Aunis rosé, and Gamay red right out of the cuves — big stainless steel or fiberglass vats — as is the custom. Ladybird tasted the 2007 and 2008 Côt (Malbec) reds because her friend C., who couldn't come on this trip, wanted a few bottles. 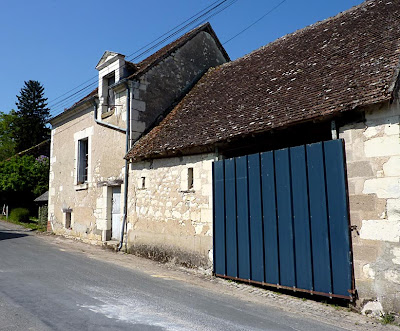 After the tasting, we had reservations at the Crêpiot restaurant in "downtown" Saint-Aignan. We were running late — it was 8:00 when we left the winery and our dinner reservation was for 7:30.

The Guerriers told us not to worry. Just tell Véronique, who owns and operates the restaurant with her husband, that you were with us. She's from the village, and was actually born in the house across the street. "We grew up together," he said. 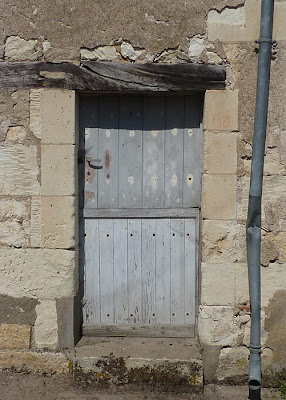 When we finally got to the restaurant, I told Véronique where we were coming from. « Alors vous étiez dans mon village ! », she said. "You were in my village! Did you see my mother's house? Was my sister out working in the garden?" It was an unexpected bonus, finding out that Véronique, who we of course have seen many times but never really been introduced to, has such really local ties. Her mother is our neighbor.

Here's a link to an earlier post about Le Crêpiot, taken one day when we had lunch there.

The food at Le Crêpiot is excellent. For dinner, I had a cuisse de canard confite (a slow-roasted duck leg) with French-fried potatoes and a green salad. Walt had a steak tartare, which was prepared by Véronique at our table — freshly ground raw beef with a raw egg, chopped garlic, capers, a good quantity of chopped parsley, chopped onion, mustard, ketchup, and a few drops of Worcestershire Sauce. Salt and pepper of course. Walt said it was excellent. It came with French fries too. 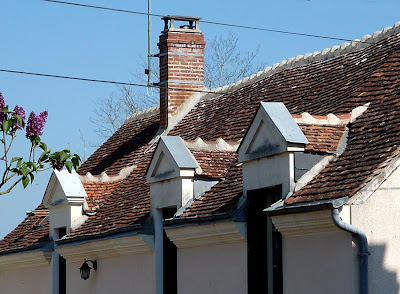 Ladybird had a crêpe filled with ham and an egg on top. The other Belgian woman had a beautiful salad with shrimp (I think, or écrevisses — crayfish) and her husband had a very nice-looking steak. To wash it all down, we ordered the restaurants "wine of the month" — Le Crêpiot always has one — which was made in the village of Seigy, just on the east side of Saint-Aignan. It was a red wine made from Gamay, Cabernet Franc, and Côt grapes. 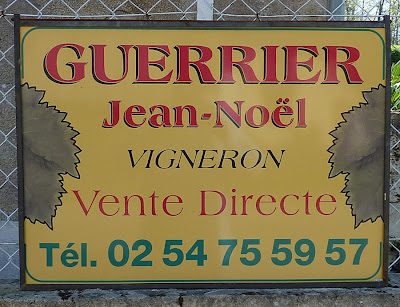 I didn't take my camera so can't post any pictures of the evening. Maybe Ladybird will post some on her blog next week — she and the other couple took pictures at the winery. The pictures in this post are ones I took during an earlier visit chez les Guerrier and show a little of what their little hamlet looks like. I've posted a lot of topics about the Guerriers and their small wine-making operation — click on "Local winemakers" in the What I blog about... list on the sidebar to find them. 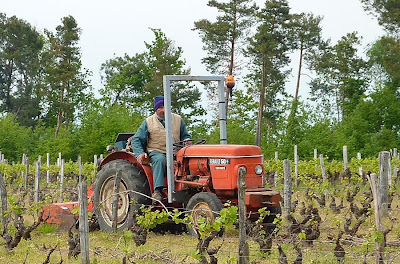 Jean-Noël Guerrier out on his tractor in the vineyard last week
For the apéritif we had at our house before going to the winery, we opened and enjoyed a bottle of rosé sparkling wine that Walt bought at the co-op up in Saint-Romain-sur-Cher, which is another one of our favorite wineries. And I made a savory cake with chicken and sun-dried tomatoes. I'll post that recipe tomorrow.

It was 11:00 p.m. when we left the Crêpiot, and Ladybird and her friends had an hour's drive ahead of them to get back to their B&B. I hope they are having a late morning today.
Posted by Ken Broadhurst at 07:39