It's as if the organizers of the Roland Garros tennis tournament — Les Internationaux de France — said "Cue the good weather. The day has come."

The tournament started yesterday. And the good weather arrived, right on cue. It's sunny, a little breezy, and almost hot — even though the temperatures are still mostly in the mild 70s F. 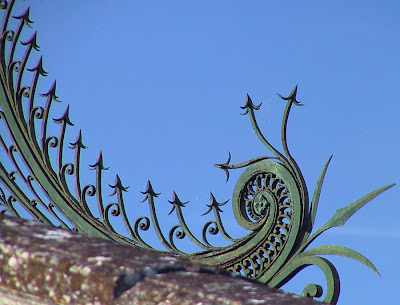 Detail of ironwork at the château in Saint-Aignan —
it's almost saying “Ta da! Look at the blue sky!”
Yesterday the high temperature at our house near Saint-Aignan, in deep shade was 26.3ºC — 79.3ºF. It's the bright sun that makes it feel hot out. There is no humidity to speak of. It's like good California weather. 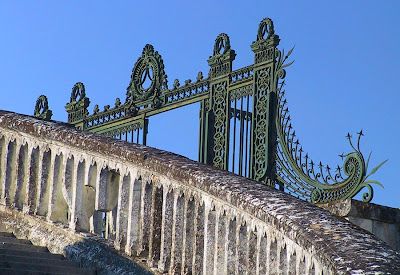 Arriving at the château in Saint-Aignan
via the monumental staircase
Watching the tennis, cooking on the grill, working in the garden, sitting in the shade just reading and listening to the radio. As they say: Elle est pas belle, la vie ? — life is good.
Posted by Ken Broadhurst at 07:57